What's On travels to Finland

This month, we head to the capital city of Finland. From the best things to do, where to stay and the dos and don’ts for any tourist, we bring you the ultimate guide to Helsinki.

More a state of mind than anything else, Helsinki’s Design District spans several downtown neighbourhoods and represents the capital’s epicentre of creativity. It is here that you’ll find everything Helsinki is renowned for – great architecture, great design, great art galleries and museums. There’s even a Design District map, offering a curated selection of more than 200 boutiques, ateliers, museums, galleries and cafes, amongst them the Design Museum in Korkeavuorenkatu and the Museum of Finnish Architecture. 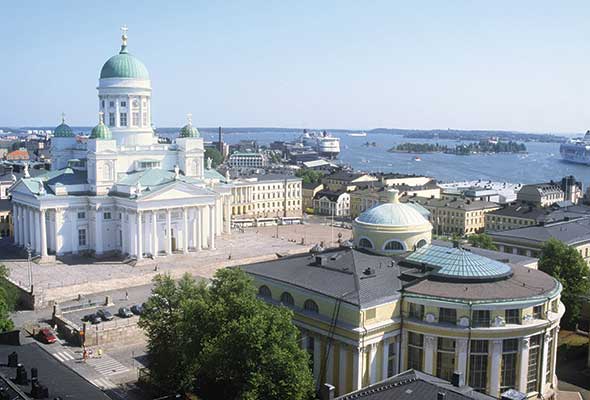 Arguably the city’s most recognisable landmark, this grand and imposing square is home to some of Helsinki’s greatest historical buildings. There’s the neoclassical, Carl Ludvig Engel-designed Helsinki Cathedral, which stands majestically at the top of a wide expanse of stone steps, and the Government Palace, which was first opened in 1822. The University of Helsinki and the National Library of Finland are also here, along with the city’s oldest stone building, Sederholm House. The latter is situated in the southeast corner and houses Helsinki City Museum.

Opened in August at a cost of Dhs209 million, this underground marvel is Finland’s latest gift to the world of art. A cultural venue located just off Mannerheimintie Avenue, it features underground exhibition spaces, the renovated 1930s Lasipalatsi ‘glass palace’, and the latter’s Bio Rex cinema. The centrepiece is 2,200 square metres of subterranean gallery space topped with a series of domes and skylights that now define the square above. The launch exhibition, which ends in January, is a psychedelic dreamscape created by the Tokyo-based digital art collective teamLab using 140 projectors and a host of computers. 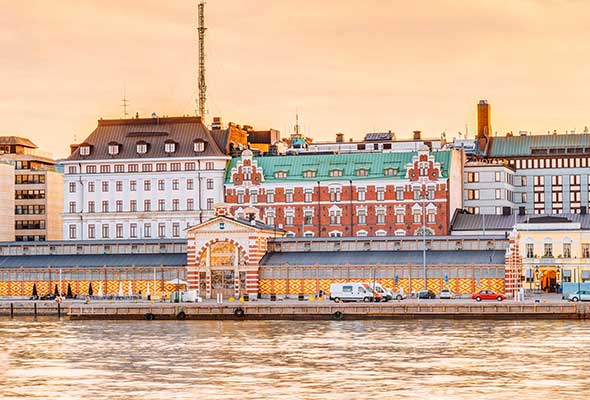 An old market hall that sits alongside the harbour, this is as traditional as it gets. Wooden stalls sell everything from Finnish cheeses and liquorice to foraged mushrooms and reindeer kebabs. First opened in 1889 and a stone’s throw from Kauppatori Market Square, it also includes a large central café called Story, as well as Soppakeittiö, a restaurant renowned for its spectacular soups.

Finland has a vibrant jazz scene, at the heart of which lies the Five Corners, or Viiskulma in Finnish. An iconic intersection of five streets with a statuesque building on each corner, it is the heart of Helsinki’s vinyl culture and home to several record stores, the most famous of which is Digelius Music. You’ll find all genres here, but notably jazz. The intersection is so embedded in the jazz psyche that The Five Corners Quintet was named after it. 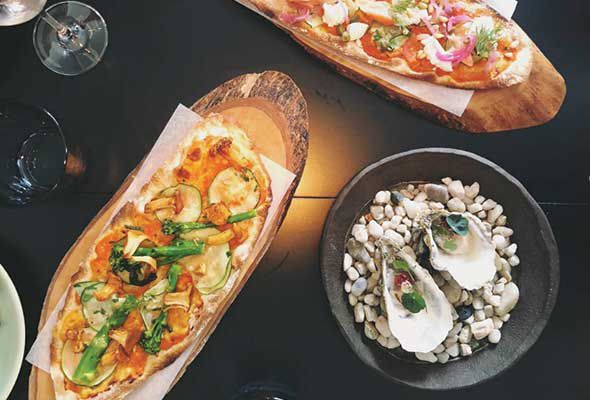 Located in the Hotel St George is this mouthwatering fusion of Anatolian and Nordic cuisine from the hands of Finnish-Turkish celebrity chef Mehmet Gürs. Here you’ll find smoked and grilled beef tongue with pickled apples, lamb neck with spicy tabbouleh and homemade yoghurt, and horse tartare with sumac, horseradish and sorrel. It’s all about Gürs injecting a bit of fun into Helsinki’s culinary scene. 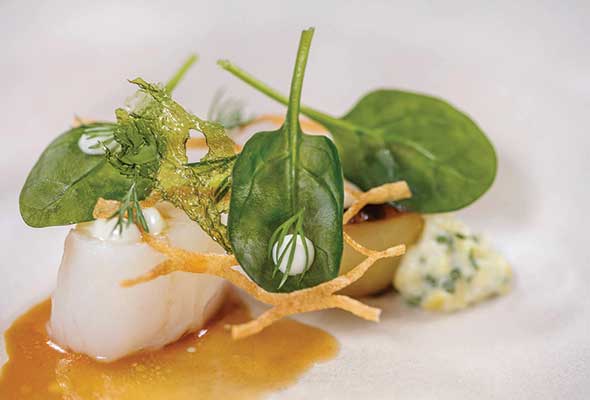 Olo has two incarnations – the innovative, Michelin-starred Scandinavian restaurant at the forefront of new Finnish cuisine, and Garden by Olo, a casual courtyard bistro just up from Senate Square. The main attraction, however, is Olo, with its foraged ingredients and molecular gastronomy. Think forest mushrooms with roe
of river trout and reindeer calf liver
with beetroot. 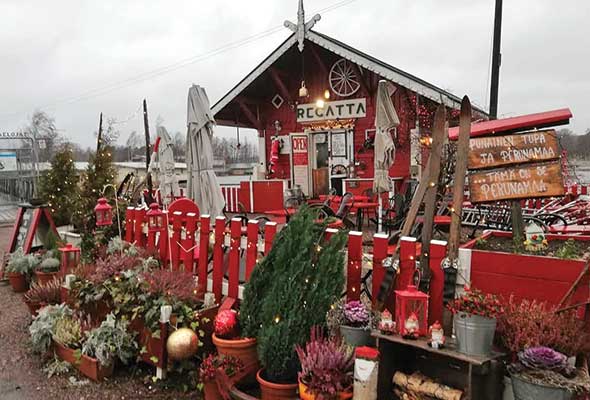 Café Regatta is rural Finland in a single, cosy nutshell. Barely large enough to swing a cat in, it is essentially a shed filled with a handful of wooden tables, some chairs and a hoarder’s collection of ephemera. Situated not far from the Sibelius monument in Töölö, the primary reason for visiting this traditional red cottage by the edge of the sea is for its fresh, homemade cinnamon buns. Worth crossing continents for.

A Helsinki landmark, the Hotel Kämp is as much a part of Finnish history as the neoclassical buildings in Senate Square. Facing Esplanadi Park and located in the heart of the city on Pohjoisesplanadi, the 131-year-old hotel was closed in the 1960s but reborn in 1999 as the high society hangout it is today. With a rich history furnished with stories of Finland’s intelligentsia, it contains 179 rooms, 10 conference rooms, and the delightful Hotel Kämp Brasserie. Room rates start at Dhs995 per night. 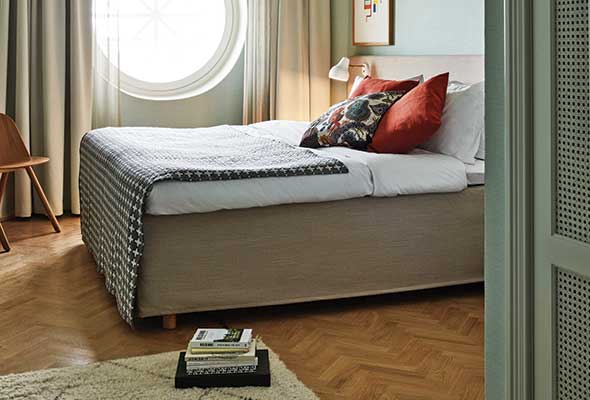 A new edition to Helsinki’s hospitality scene, the Hotel St George opened in May and is situated in a former printing house in Yrjönkatu 13. Although part of the building dates back to the 1840s, the most recognisable section was designed by the architect Onni Tarjanne and completed in 1890. Home to the restaurant Andrea, it has 10,000 square metres of space spread across seven floors and even includes a sculpture by artist Ai Weiwei in its main lobby. Room rates start at Dhs780 per night. 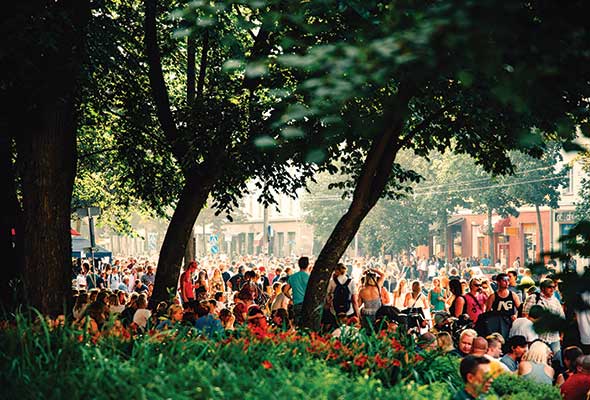 DO: wrap up warm

Depending on when you go, temperatures can drop as low as -25C in Helsinki, although the summer months can be pleasant. Not that that should stop you from going for a dip in the city’s Allas Sea Pool.

DO: go for a sauna

Finland has two million, which is enough to accommodate all 5.4 million inhabitants at one time.

Around 70 per cent of Finland is covered by forest and the country has 187,888 lakes. That’s an average of 40 lakes per 100 square kilometres.

How to get there? 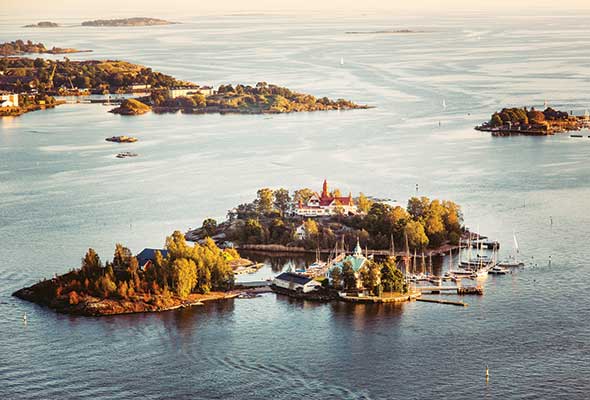 Direct flights to Helsinki are now possible thanks to flydubai, which began daily flights to the Finnish capital last October. It is the only UAE carrier to fly to Finland, with economy class return fares starting at Dhs1,545.

Holiday
Travel
EDITOR’S PICKS
All the new restaurants, bars and pool clubs still to open in Dubai 2020
READ MORE
17 of the best coffee shops and roasters in Dubai
READ MORE
Jubail Mangrove Park to reopen next week with exciting new additions
READ MORE
All the DPI rapid Covid test centre locations in the UAE and how to book them
READ MORE
MOST POPULAR
This stunning Fujairah staycation has some unbelievable rates
Interview: We talk to Holly Holm ahead of her huge upcoming UFC clash
Zabeel House by Jumeirah, The Greens has some brilliant staycation deals
These Dubai restaurants are offering free dishes for World Vegetarian Day
Where to go glamping in the UAE, from beach huts to luxe caravans
YOU SHOULD CHECK OUT
Our website uses cookies and other similar technologies to improve our site and your online experience. By continuing to use our website you consent to cookies being used. Read our privacy policy here.