Patrice Evra poses in front of the Burj, Vicky Pattinson heads to an exclusive island party, and Shah Rukh Khan sips a coffee with his face on… 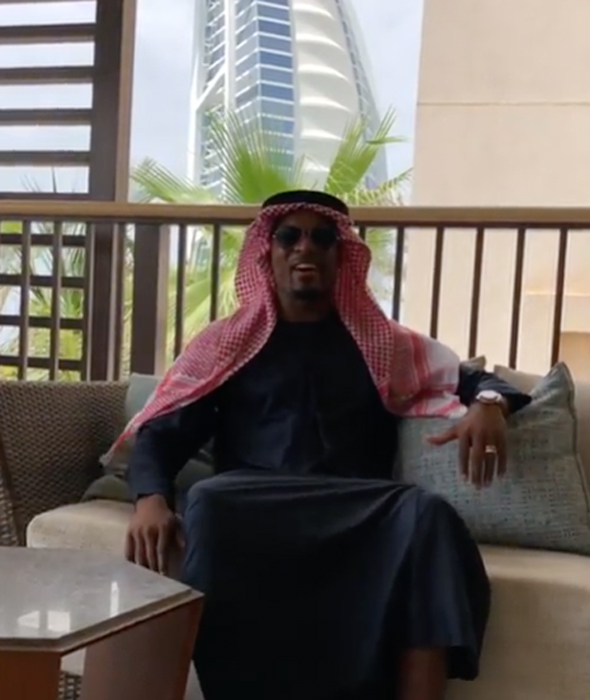 French footballer and former West Ham left-back Patrice Evra has been sharing plenty of fun footage from his visit to Dubai this week. As well as sharing videos of him at his hotel, with the sail of the Burj Al Arab in the background, he also gave his 5.9 Instagram followers a tour of Saif Belhasa’s farm.

Following in the footsteps of Pierce Brosnan, Shah Rukh Khan has made his way to Dubai to enjoy a coffee with his face on (who can blame him?). While that’s probably not the only reason he’s here, the Indian megastar made sure to share the impressive drink with his almost 17 million Instagram followers as he met with Kalyan Jewellers.

Italian TV presenter Melissa Satta has been enjoying a holiday in Dubai this week. As well as soaking up the sun at the Burj Al Arab, the stunning star also headed to new party spot, Sky2.0, sharing several selfies from her trip with her 3.7 million Instagram followers.

We already think Base Dubai is the city’s best club – and apparently so does Olivia Bowen. The Love Island alum has been enjoying a girls’ trip with Inside Lifestyle, and shared a post from the d3 super club saying that “If you are in Dubai you have to go to @basedubai it’s not an option not to”. We agree, Olivia!

British reality TV star Vicky Pattinson jetted to the UAE for a quick weekend of fun in the sun and to attend the first ever Secret Island Party at Zaya Nurai Island. While in the emirates, she also made her way to Atlantis Beach Club for ladies’ day, and shared snaps from her hotel, FIVE Palm Jumeirah.

A slightly lower-tempo version of Zero Gravity’s Friday night parties took place this weekend as former X-Factor star James Arthur took to the stage. Arthur performed a string of his most popular hits including Say You Won’t Let Go and Sun Comes Up to a sellout crowd. He was supported by local act, Hadi, who shared this snap saying: ““So pumped that I got to open for @jamesarthurinsta23 and got to meet and chat with him. He was a true gentleman and his performance was so inspiring.”

Felix De Laet, aka Lost Frequencies made his return to Dubai this weekend for the second time in as many months. The Belgian DJ flew in to play a set at the colourful Thursday night party at FIVE Palm Jumeirah, but on this occasion, he also made time for a trip to the Dubai desert, where he went dune buggying and sand boarding.

Although reality TV star Sam Faiers has been enjoying a family holiday in Dubai for the last few days, she’s also made time to get some work done. She headed to the oh-so-Instagrammable Drift Beach club for a photoshoot to shoot her latest drop for her online clothing store, All Bits London.

Celebrities
News
EDITOR’S PICKS
Ain Dubai will open with fireworks, live music and a drone show
READ MORE
Incredible Aura SkyPool to open in Palm Tower this November
READ MORE
Brit Grand Slam hero Emma Raducanu confirmed for Mubadala Tennis
READ MORE
What’s On Nightlife Awards 2021: Here are the nominees...
READ MORE
MOST POPULAR
Stunning fine-dining French restaurant Bleu Blanc reopens
14 things to look forward to in Dubai this November
Emirates Airline Festival Of Literature 2022 dates announced
This new Dubai restaurant serves unlimited pizza for Dhs95
A spooky Halloween run is taking place at Dubai Festival City this weekend
YOU SHOULD CHECK OUT
Our website uses cookies and other similar technologies to improve our site and your online experience. By continuing to use our website you consent to cookies being used. Read our privacy policy here.