A new heart-shaped sculpture has been unveiled in Downtown Dubai

Written by:
Aarti Saundalkar
9th May 2019

If you’re heading to Dubai Mall for a shopping spree, or to catch up with friends at one of their many restaurants, here’s something you may want to add to your agenda.

A new three-dimensional sculpture in the shape of a heart now stands outside Dubai Mall, and it’s sure to grab the attention of anyone with an Instagram account. 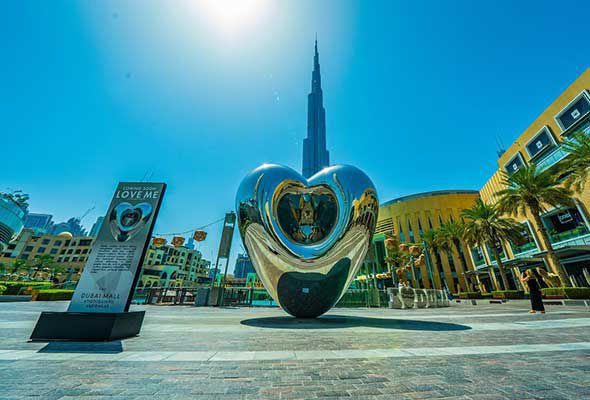 The new sculpture is called ‘LOVE ME’, and is a work of art created by master sculptor Richard Hudson.

It’s not the first time visitors have been able to check out the striking sculpture. ‘LOVE ME’ first appeared in February 2018 as a Valentine’s-themed exhibition at Dubai Mall on a much smaller scale.

This time around, the ‘LOVE ME’ sculpture measures five metres by five metres, and has a depth of 3.8 metres. It also weighs 7,000 kilograms which is roughly the weight of an adult elephant.

The sculpture was so big that it had to be transported in several pieces and assembled on site.

Where to find it?

You’ll find the sculpture located outside Dubai Mall near Jones the Grocer.

Cameras at the ready…

Art
Culture
Things to do
EDITOR’S PICKS
So, when is the next UAE public holiday in 2021?
READ MORE
All of the lavish new hotels set to open in Dubai in 2021
READ MORE
16 of the best pool passes in Dubai that are fully redeemable
READ MORE
All of the restaurants at West Beach, Palm Jumeirah
READ MORE
MOST POPULAR
7 reasons why Fouquet's needs to be top of your dining bucket list
Hit the pause button with this three-day retreat by 3 Elements
Quarantine requirement for Abu Dhabi tourists will likely end by July
9 cracking Dubai roast dinners with drinks included
Ras Al Khaimah reveals 20 new attractions coming to the emirate
YOU SHOULD CHECK OUT
Our website uses cookies and other similar technologies to improve our site and your online experience. By continuing to use our website you consent to cookies being used. Read our privacy policy here.