It’s one of Dubai’s most ambitious – and exciting – upcoming projects, and a stunning new picture revealed by Dubai Media Office shows just how fast work is progressing on the Museum of the Future.

The stunning new museum, which is expected to open in 2020, is currently under construction on Sheikh Zayed Road. The large silver structure is designed in the shape of an eye, hollowed out in the middle and is set to be one of Dubai’s must-visit attractions when it opens.

In the new picture, taken from in front of a car bonnet with a peacock stood on top of it, we can see that well over half of the silver Arabic calligraphy has been put into to place on one side.

When complete, the calligraphy will feature quotes about the future from H.H. Sheikh Mohammed bin Rashid Al Maktoum Vice President of the UAE and Ruler of Dubai. 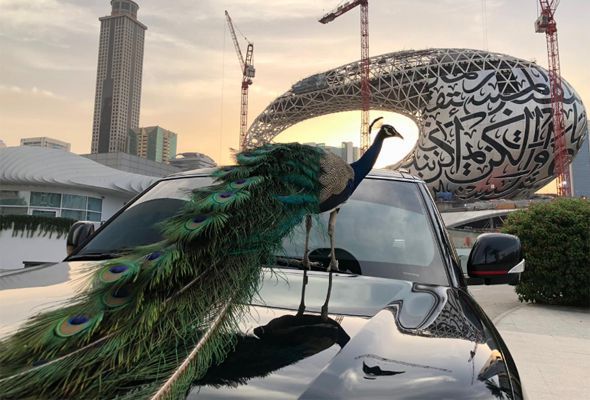 Construction is clearly moving fast, as it was only back in November that the Dubai Future Foundation announced that the full structure had been completed.

The Museum of the Future was first announced in 2015, and has been under construction ever since in front of Emirates Towers on Sheikh Zayed Road.

When the museum opens, rather than being filled with artifacts from the past, the Museum of the Future will give visitors a glimpse into what the future could look like both in Dubai, and around the world.

“The Museum of the Future will be an incubator for ideas, a driver for innovation, and a destination for inventors and entrepreneurs from around the world,” Sheikh Mohammed has previously said.

News
EDITOR’S PICKS
Here's the full list of UAE public holidays in 2023
READ MORE
23 incredible things to look forward to in the UAE in 2023
READ MORE
Hidden gems: 10 UAE desert pop-ups to discover this winter
READ MORE
Where to travel in 2023: 10 new flight routes from the UAE
READ MORE
MOST POPULAR
Reservations are now open for French restaurant Fouquet's Dubai
The colourful Sharjah Light Festival returns next week
Relive those cosy winter moments at Chalet 105 at Twiggy
There are some big road closures in Abu Dhabi this weekend
Escape for a romantic desert getaway this Valentine's Day
YOU SHOULD CHECK OUT
Our website uses cookies and other similar technologies to improve our site and your online experience. By continuing to use our website you consent to cookies being used. Read our privacy policy here.