This new road will soon ease the Sharjah to Dubai traffic

Tripoli Street is due to open at the end of June…

Drivers who struggle with the Sharjah to Dubai (and vice versa) traffic every day will soon find the commute a lot easier. Work being carried out to build 12 kilometre road, Tripoli Street, is now 92 per cent complete and due to open by the end of June 2019.

The Roads and Transport Authority (RTA) have been working on developing the new road, which links Sheikh Mohammed bin Zayed Road and Emirates Road, and runs parallel to the recently re-opened Airport Street Improvement Project. 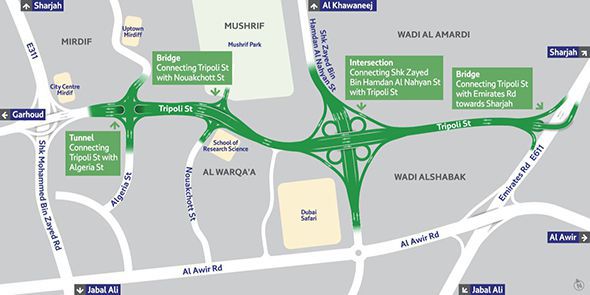 ALSO READ: You can now renew your car in Dubai without clearing outstanding fines

“The project will enhance the link between Dubai and Sharjah, ease traffic movement and streamline the access to Warqaa and Mirdif districts. It will also improve the traffic safety at the intersections with Rabat and Nad Al Hamar Streets nearby of Bel Remaitha Club,” said HE Mattar Al Tayer, Director-General of the RTA.

The completion of this project is in line with RTA’s five-year internal roads plan (2019-2023) which covers the construction of internal roads in several residential districts across Dubai.

Transport
EDITOR’S PICKS
13 Sheikh Hamdan-approved restaurants in Dubai
READ MORE
Dubai brunches temporarily banned in new preventative measures
READ MORE
12 upcoming Dubai mega-projects we can't wait for
READ MORE
16 of the best beach bars in Dubai for sundowners
READ MORE
MOST POPULAR
Breaking: Dubai extends preventative measures until mid-April 2021
Enjoy brunch, breakfast and a stay at Westin Abu Dhabi from Dhs432
Get a free gym class at this cool new Dubai gym
Pics of the week: Your best photos of the UAE
Emirates Airlines and DHA to implement digital verification of traveller medical records
YOU SHOULD CHECK OUT
Our website uses cookies and other similar technologies to improve our site and your online experience. By continuing to use our website you consent to cookies being used. Read our privacy policy here.