Thousands of guests from across the world are expected to attend the wedding receptions of Sheikh Hamdan bin Mohammed, the Crown Prince of Dubai, Sheikh Maktoum, Deputy Ruler of Dubai, and Sheikh Ahmed, chairman of the Mohammed bin Rashid Al Maktoum Knowledge Foundation at the Dubai World Trade Centre.

According to Gulf News, images of the invites began circulating on social media last Monday, detailing information on when and where the celebration will take place. The government media office then confirmed the news. 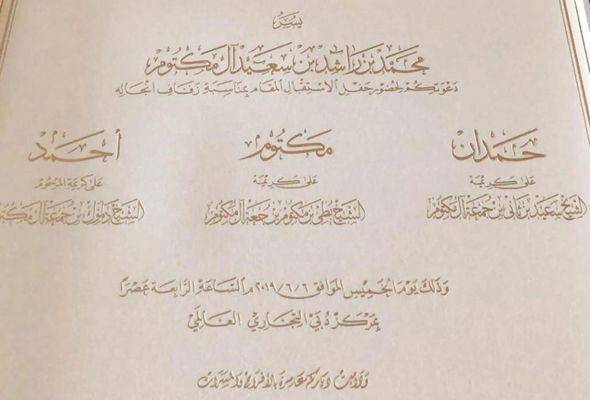 Written in decadent gold calligraphy, the name of H.H. Sheikh Mohammed Bin Rashid Al Maktoum Vice President of the UAE and Ruler of Dubai was written at the top, inviting guests to attend the celebration of his three sons’ wedding.

Sheikh Hamdan was married alongside two of his brothers, Sheikh Maktoum bin Mohammed, Deputy Ruler of Dubai, and Sheikh Ahmad bin Mohammed, Chairman of the Mohammed bin Rashid Al Maktoum Knowledge Foundation in an Islamic private ceremony on May 15. At the time of announcement, it was expected a wedding celebration would follow.

News
Royals
EDITOR’S PICKS
9 royal-approved Dubai restaurants
READ MORE
12 incredible rooftop pools in Dubai to check out
READ MORE
16 of the best beach bars in Dubai for sundowners
READ MORE
Covid-19 rules in Dubai: all the updates you need to be aware of
READ MORE
MOST POPULAR
Join us for a preview of Fairmont Bab Al Bahr's Valentine's dine around
A new Amapiano brunch is coming to Annex at The Abu Dhabi Edition
Pay off your traffic fines in installments without interest
This stunning new gastropub is officially open at Soho Garden
Review: DIFC's new rooftop Japanese restaurant, Clap
40 places to celebrate Valentine's Day in Dubai
YOU SHOULD CHECK OUT
Our website uses cookies and other similar technologies to improve our site and your online experience. By continuing to use our website you consent to cookies being used. Read our privacy policy here.