Here's where the new Saltbae burger restaurant will open in Dubai

The restaurant will trade under the name ‘Saltbae’…

After we first revealed that Salt Bae, real name Nusret Gökçe, was set to open a restaurant in DIFC, we’ve learned exactly where that new restaurant will go.

According to the DIFC public register, the restaurant will simply trade under the name Saltbae, and will open in Gate Village 2. It replaces high-end Mexican restaurant Peyote, which closed in 2018.

The famed chef revealed he was opening a DIFC restaurant back in March, when he took to Instagram stories to share the news with his 22.7 million followers. In a series of posts, the chef announced that he would open Saltbae burger ‘in the next three months’. Although that three months has past and no opening date has yet been given, we predict it won’t be long until you’ll be able to enjoy Saltbae burgers at the DIFC outpost.

Although it’s understood that this will be an entirely new concept from the famous chef, he does already have a chain of burger restaurants across Turkey and New York called Nusret Burger. 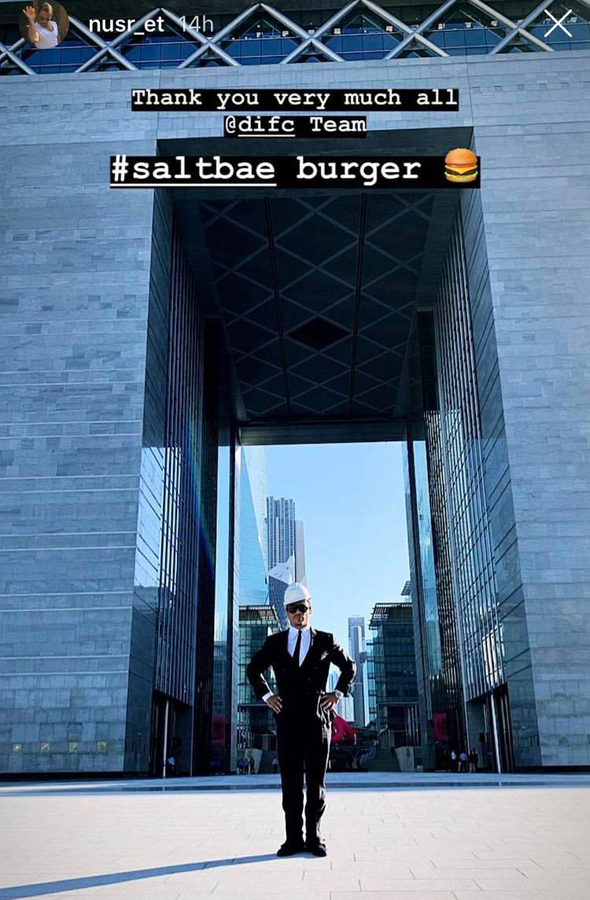 Salt Bae’s original Dubai restaurant in Jumeirah Four Seasons, Nusr-et, has been frequented by stars including Paul Pogba, Rio Ferdinand, DJ Snake, Leonardo DiCaprio and even Vice President of the UAE and Dubai ruler HH Sheikh Mohammed Bin Rashid Al Maktoum, so we wonder if his casual burger joint in the financial district will draw in a similar A-List clientele.

Saltbae will be the latest in a string of new restaurants opening their doors in DIFC, joining the likes of Gaia by chef Izu Ani, New-York export Marea and Ciboney’s which serves high-end Caribbean cuisine.

The new restaurant will also open alongside China Tang, which makes its way to Dubai from London, and will make its debut in the new Gate Village 11 building.

Eat & Drink
EDITOR’S PICKS
13 Sheikh Hamdan-approved restaurants in Dubai
READ MORE
Dubai brunches temporarily banned in new preventative measures
READ MORE
12 upcoming Dubai mega-projects we can't wait for
READ MORE
17 of the best beach bars in Dubai for sundowners
READ MORE
MOST POPULAR
Wizz Air to launch Abu Dhabi to Tel Aviv flights from Dhs99
8 places to catch the Indian Premier League in Dubai
Emirates flight tickets can now be rebooked within 36 months
What’s On The Bookshelf: 3 feel-good fictions you have to read
Review: Hickory's Friday brunch at Yas Links Golf Club
YOU SHOULD CHECK OUT
Our website uses cookies and other similar technologies to improve our site and your online experience. By continuing to use our website you consent to cookies being used. Read our privacy policy here.