Eid Al Adha is just around the corner and we already know it’s going to be an extra-long weekend. One of the most exciting parts about the Eid celebrations is the stunning firework display at Dubai Festival City Mall.

During Eid Al Fitr earlier this year fireworks could also be seen at Al Seef and La Mer, however the only place you’ll be able to see them this time around is at Festival City.

The dazzling fireworks will take place on Sunday August 11 and Monday August 12 alongside IMAGINE, the incredible water, lights and laser show that takes place daily at Dubai Festival City. They’ve designed a bespoke show especially for the Eid Al Adha celebrations, with two shows per night at 8pm and 10pm respectively. 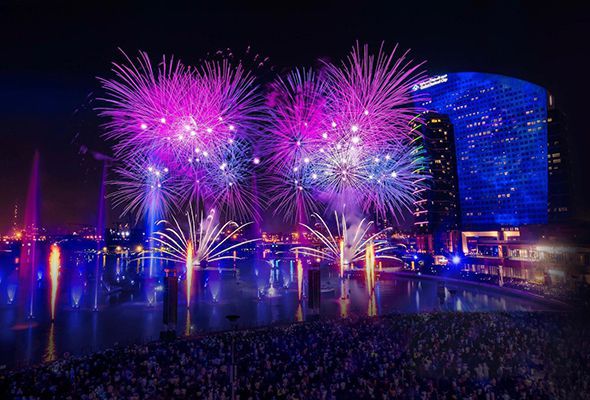 Visitors can expect to marvel at the expertly choreographed shows, which will synchronise fire, water and lights to the bright and beautiful fireworks. Best of all, the exciting performances are 100 per cent free for everyone to come and enjoy.

The public and private sector holiday dates have been announced for Eid Al Adha 2019. For both sectors the holiday will begin on Saturday, August 10, and employees will be off until Tuesday, August 13. Work will then resume on Wednesday August 14.

What is Eid Al Adha?

According to tradition, Eid Al Adha is held to honour Ibrahim’s willingness to sacrifice his son, after being instructed to do so by God. Prophet Ibrahim told his son of the dream, and the son then told his father to follow the order.

But God intervened, sending a sheep to take his sons place.

Things to do
EDITOR’S PICKS
Ain Dubai will open with fireworks, live music and a drone show
READ MORE
Incredible Aura SkyPool to open in Palm Tower this November
READ MORE
Brit Grand Slam hero Emma Raducanu confirmed for Mubadala Tennis
READ MORE
What’s On Nightlife Awards 2021: Here are the nominees...
READ MORE
MOST POPULAR
This Sicilian rooftop party brings Godfather glamour to Dubai
There's a murder mystery brunch at this Abu Dhabi bar
Celebrity-loved London restaurant The Cinnamon Club is coming to Dubai
Review: Step into a Spanish scene at Hola Rooftop
This brilliant Dubai beer garden reopens for the winter season
YOU SHOULD CHECK OUT
Our website uses cookies and other similar technologies to improve our site and your online experience. By continuing to use our website you consent to cookies being used. Read our privacy policy here.