Abu Dhabi to build a Mosque, Church and Synagogue in one location

When Pope Francis paid a landmark, three day visit to the UAE in February 2019, he attended an International Interfaith Meeting where he signed the Document on Human Fraternity for World Peace and Living Together along with Grand Imam of Al-Azhar and His Eminence Dr. Ahmed el-Tayeb.

The event took place on February 4, 2019 at the Founder’s Memorial and just a day later, on February 5, 2019 HH Sheikh Mohamed bin Zayed Al Nahyan, Crown Prince of Abu Dhabi announced the construction of the Abrahamic Family House – which will house a Mosque, Church and Synagogue all in one location. It will be located on Saadiyat Island. 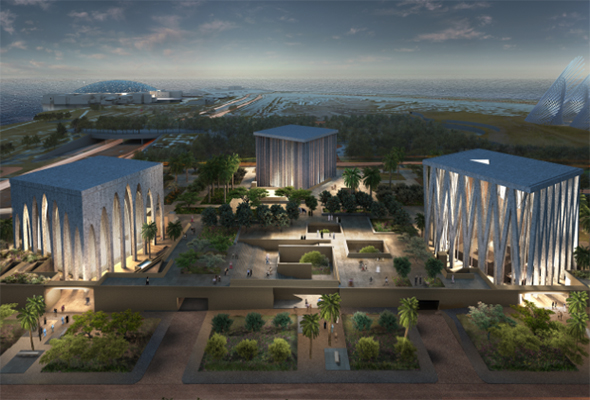 The name ‘Abrahamic’ stems from the word Abraham – and Abraham is recognised as the first prophet by all three religions – Judaism, Christianity, and Islamic, thus uniting the religions as one.

The three main buildings in the location will be the mosque, church and a synagogue, each with varying exteriors and interiors reflecting each religion, and each will each lead to a central garden. The garden will include a museum and centre for education.

As with all other houses of worship, the mosque will be facing toward the Kaaba in Makkah, the church’s altar will point east, and the synagogue’s podium and Torah will face Jerusalem.

All the places of worship here are all set to be the same height, but they will each differ when it comes to exterior and interior design, reflecting each religion.

Abrahamic Family House was designed by renowned British architect, Sir David Adjaye and images were released when the Higher Committee of Human Fraternity met for their second meeting at the New York Public Library. The committee was formed on August 19, 2019 here in the UAE to concretize the goals formulated in the Document on Human Fraternity.

Committee member Mohamed Khalifa Al Mubarak, chairman of the UAE’s Department of Culture and Tourism says that this latest proposal to “bring world cultures together” is rooted in an overall desire on the part of the UAE.

The message, he says is: “to simplify faith back to its simplest form. To simplify life to what all our religious books basically say: be good to thy neighbour, love thy neighbour, help thy neighbour… Projects and initiatives like the Abrahamic Family House, and there will be many more to come in the future, will bring people together. It’s a dream come true where the people of the UAE, a people who favour tolerance, have the opportunity of sharing that with the world”.

We can’t wait for this to be completed!

Culture
News
EDITOR’S PICKS
Exclusive Reveal: Topgolf Dubai is here and ready for action
READ MORE
65 of the best outdoor bars and terraces in Dubai
READ MORE
7 brilliant dining deals in Dubai this month
READ MORE
18 of Dubai's most Instagrammable breakfast spots
READ MORE
MOST POPULAR
The best restaurants at The Pointe with Palm Fountain views
Tough Mudder returns to the UAE this February
This family staycation includes daily tickets to Dubai's top attractions
Britain's Got Talent's hilarious improv troupe to perform in Dubai
The best restaurants on Abu Dhabi’s Hudayriyat Island
YOU SHOULD CHECK OUT
Our website uses cookies and other similar technologies to improve our site and your online experience. By continuing to use our website you consent to cookies being used. Read our privacy policy here.