Heading to The Dubai Mall will no longer merit a look of fear across any driver’s face as Dubai’s Roads and Transport Authority (RTA) have announced new bridges are set to open at the end of this month.

Confirming the news on the RTA’s official Twitter account, HE Mattar Al Tayer, Director-General and Chairman of the Board of Executive Directors of RTA, stated that the “bridges leading to entry/exit points of The Dubai Mall Zabeel multi-level parking building would be opened on Tuesday October 29, 2019.”

The bridges will help cut down congestion in the Downtown and the surrounding area.

Here are the details: 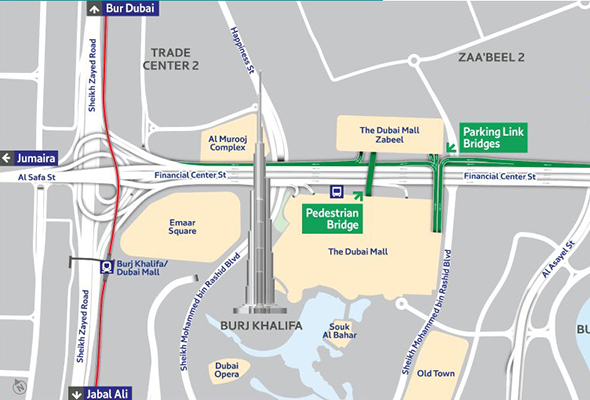 One bridge will link the Dubai Mall Zabeel parking building with the upper level of Financial Centre Street.

A second bridge will extend from the parking building to the direction of Sheikh Zayed Road and Jumeirah.

There will also be a footbridge linking the parking with The Dubai Mall.

We also have good news for cinema goers. According to Emirates News Agency (WAM), the contractor is currently carrying final works to bridges linking the upper level of the Financial Centre Street and The Dubai Mall’s cinema parking. An opening date will be announced soon.

News
Transport
EDITOR’S PICKS
Covid-19 rules in Dubai: all the updates you need to be aware of
READ MORE
9 royal-approved Dubai restaurants
READ MORE
16 of the best beach bars in Dubai for sundowners
READ MORE
Where to get the Covid-19 vaccine in Dubai, Abu Dhabi and across the UAE
READ MORE
MOST POPULAR
Inside one of the coolest new hotels opening in Dubai
Department of Health approves three new rapid Covid-19 tests
Save up to 90 per cent at malls in Dubai this weekend
Atlantis, The Palm relaunches underwater yoga classes
6 fun things to do in Abu Dhabi this week: January 24 to 27
YOU SHOULD CHECK OUT
Our website uses cookies and other similar technologies to improve our site and your online experience. By continuing to use our website you consent to cookies being used. Read our privacy policy here.