Legendary DJ Steve Aoki flew into Dubai for a special one-off gig at White this weekend, but still managed to find time to explore the Dubai desert. Aoki lived up to his wild reputation by throwing multiple full size cakes into the crowd at his gig, much to the delight of his super fans in the audience. Look out for his on Palm Jumeirah, as he’s staying in Royal Central Hotel – The Palm.

Ex-The Only Way is Essex star Samantha Faires is staying in Dubai with her family, at One&Only Royal Mirage. Her and her kids seem to be having a fun time at the resort, enjoying pool days, dinners and chill time together. 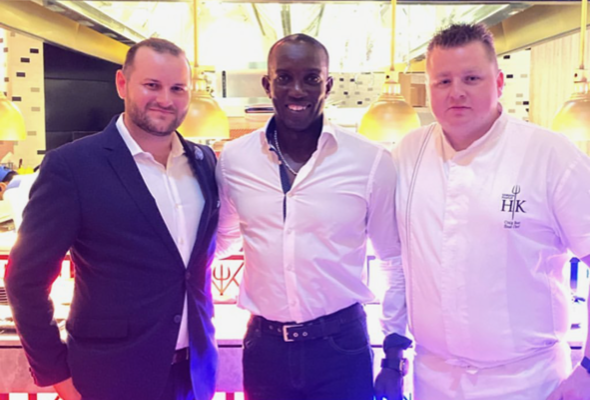 Legendary footballer Dwight Yorke is in Dubai too, although seemingly flying under the radar, our stalking skills spotted the former Manchester United player at Hell’s Kitchen.

Yep, he’s still here! Jason Derulo has been taking a well-deserved break relaxing in the UAE. This week he’s been to Palazzo Versace hotel to enjoy a chilled out pool day.

Haile and Louis Rei, members of R&B group Wstrn gave two performances in Dubai this week at Drai’s and Toy Room. When they weren’t working the pair found time to check out the Dubai Fountains, and some super cars.

Former Dubai resident and Love Island contestant, Laura Anderson, has returned to the UAE this week. Let’s see what she has in store for her trip while she’s here…

Former Love Island stars Olivia and Alex are back in Dubai for a holiday. The pair have visited many times before and seem as though they can’t get enough of it. They’ve been spotted having dinner in Hell’s Kitchen, as well as enjoying a night time boat party, sailing around Atlantis.

Former Coronation Street star Arianna Ajtar was in the UAE this weekend to attend the Secret Island Party at Zaya Nurai Island. She then went on to a Dubai boat party, with a few other celebs who also attended the party.

Harley Brash, a contestant on this year’s Love Island series, was another celeb on the guest list for the Secret Island Party in Abu Dhabi.

Francesca Allen, a contestant on this year’s Love Island series, was another celeb on the guest list for the Secret Island Party in Abu Dhabi.

Celebrities
EDITOR’S PICKS
13 Sheikh Hamdan-approved restaurants in Dubai
READ MORE
Dubai brunches temporarily banned in new preventative measures
READ MORE
12 upcoming Dubai mega-projects we can't wait for
READ MORE
16 of the best beach bars in Dubai for sundowners
READ MORE
MOST POPULAR
Tried and tested: The brand new slides at Atlantis Aquaventure waterpark
You can now bring your pet along to this luxury Abu Dhabi hotel
Bla Bla Dubai launches romantic date night cabana offer
These Dubai roads will be temporarily closed on Friday, February 26
Have unused beauty products lying around? Donate them to this wonderful initiative
YOU SHOULD CHECK OUT
Our website uses cookies and other similar technologies to improve our site and your online experience. By continuing to use our website you consent to cookies being used. Read our privacy policy here.