The first outdoor restaurant is now open on the QE2 Dubai

Over a year since the legendary QE2 cruise ship debuted as Dubai’s first floating hotel, it’s announced the opening of its first alfresco dining option. Called Pavilion, the restaurant will serve Mediterranean dishes and will aptly open on the Pavilion Deck from Saturday November 2.

Those who sailed on the ship during her years of service will recognise this spot as the space formerly occupied by the QE2’s outdoor swimming pool.

Inspired by its nautical surroundings, the menu reads like pages straight from a restaurant perched on the coast of the Aegean sea. An al dente pasta selections features Rigatoni Al Buffalo, spaghetti al putinesca and seafood linguine, while for mains guests can feast on giant garlic prawns and pan-fried red snapper.

An array of signature cocktails and mocktails will compliment the menu, including a QE2 sangria. 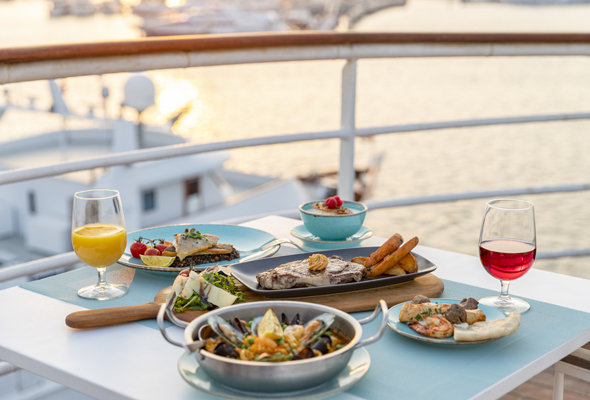 Open for lunch and dinner, diners will also be treated to beautiful views of the neighbouring Mina Rashid Yacht Club and twinkling Dubai skyline in the distance.

On Fridays, the Pavilion deck will be transformed into an extension of the popular QE2 Brunch., which takes place inside at Lido restaurant. With cuisines from around the world, it will feature live cooking stations of fresh pasta, seafood and BBQ options, as well as boasting a Mediterranean-style buffet. It’s available on Fridays from 1pm to 4pm, priced at Dhs225 for the soft package and Dhs395 including house beverages.

Eat & Drink
Restaurants
EDITOR’S PICKS
What’s On Nightlife Awards 2021: Here are the nominees...
READ MORE
It's back! What's On Lock In returns to Media One Hotel
READ MORE
Arts and culture: 5 spots we can't wait to visit at Expo 2020 Dubai
READ MORE
UAE petrol prices are set to decrease in September 2021
READ MORE
MOST POPULAR
Towards the next 50: Five transportation systems coming to the UAE
Celebrity hotspot Caviar Kaspia to open in Dubai this October
Want to revamp your home? Check out Dubai Home Festival at Dubai Festival City Mall
Review: The little-known brunch at Sayad, is one of the capital's best
Why Armani/Mediterraneo needs to be on your Dubai dining bucket list
YOU SHOULD CHECK OUT
Our website uses cookies and other similar technologies to improve our site and your online experience. By continuing to use our website you consent to cookies being used. Read our privacy policy here.