What’s On Abu Dhabi Awards 2019: Here are the winners…

Were your favourites crowned?

Last night, at a glittering ceremony at the Grand Hyatt Abu Dhabi, the city’s entertainment and hospitality industries were celebrated at our annual awards ceremony.

The majority of the awards are voted for by the general public, with just our four ‘Grand Prix’ (including the coveted Restaurant Of The Year award) trophies being chosen by the team at What’s On. So, here are the city’s best spas, restaurants, bars, concerts and more, as chosen by you, our army of readers.

RESTAURANT OF THE YEAR – Oak Room at The Abu Dhabi EDITION 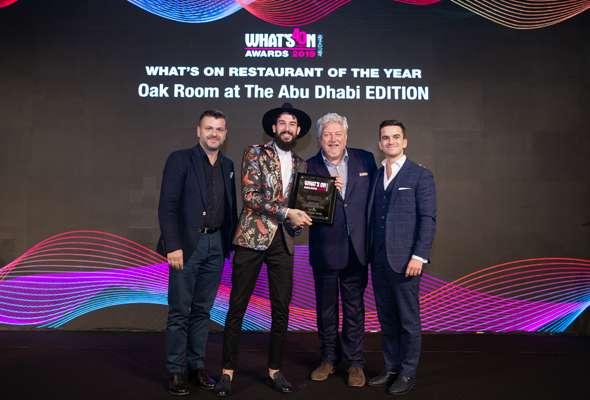 It turns out that Will Smith and the What’s On team have something in common – they both love this Abu Dhabi restaurant. In fact, Will Smith loved his meal so much on his first visit that he returned the very next night back to The Abu Dhabi EDITION – with a party of 16! Do as the Fresh Prince did and order the 250g Black Onyx striploin from Australia. It’s a cut that requires but a chew or two, simply melting in your mouth. It truly is a meaty marvel in the capital. Our Restaurant of the Year: The Oak Room.

CHEF OF THE YEAR – Chef Gaurav Kathawate, of Martabaan by Hemant Oberoi 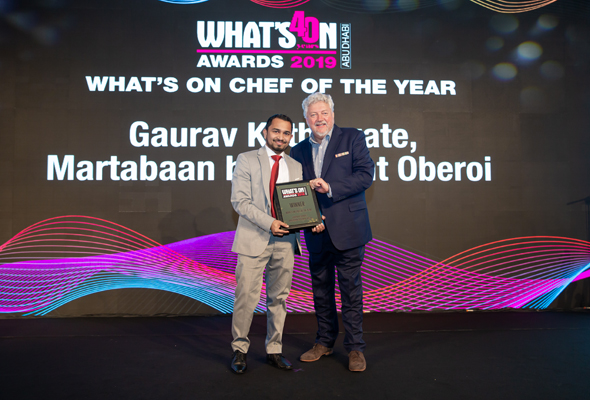 Our chef of the year has quite a resume. He’s worked in the industry for just shy of decade, with some of the finest global hotel chains around Asia. He’s conceptualised various food festivals and catered to VIP dignitaries. He’s mastered the art of presenting Indian food in the most authentic way with touches of contemporary presentation. But it’s as the right hand to legendary chef Hemant Oberoi where our chef has sealed his stature as a great chef, re-opening Hemant’s restaurant in Singapore and now as executive chef at Martabaan by Hemant Oberoi in Emirates Palace. Congratulations to our Chef of the Year, Gaurav Kathawate. 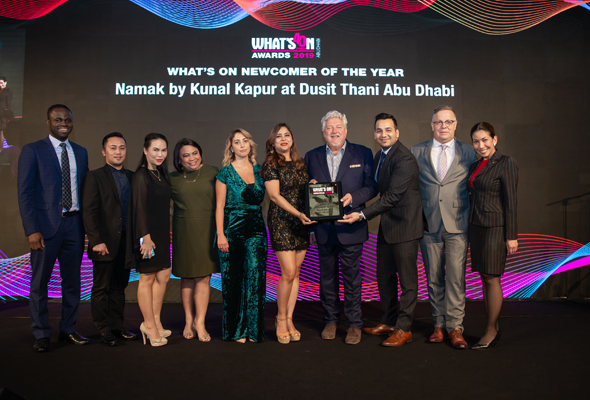 At the start of this year, there was one question on everyone’s lips. ‘Have you been to the new restaurant in the Dusit Thani yet?’ The brainchild of celebrity Indian chef Kunal Kapur, our Newcomer of the Year has been one of the most exciting restaurant openings in the capital. Don’t expect traditional cuisine here. Instead you’ll find unique dishes such as chicken tikka stuffed into a Tibetan bun and a smoked chicken soup served in a smoke-filled globe. It really must be seen to be believed. Take our advice: go hungry and take a food journey through its unique offerings. You’ll be glad you did. Our Newcomer of the Year: Namak.

INDIE RESTAURANT OF THE YEAR – Sanderson’s 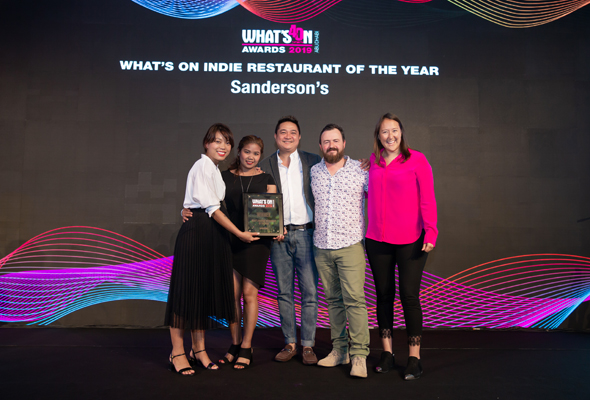 You’d be forgiven for thinking you’d walked into an LA juice bar, or an Ibiza café at our Indie Restaurant of the Year, Sandersons. It’s light, bright and contemporary. Its menu can best be described as wholesome, drawing inspiration and flavours from around the world. The man behind it – a bull to many – was behind some of Dubai’s best ever cafes so it’s not surprising that his Abu Dhabi outpost is as good if not better. 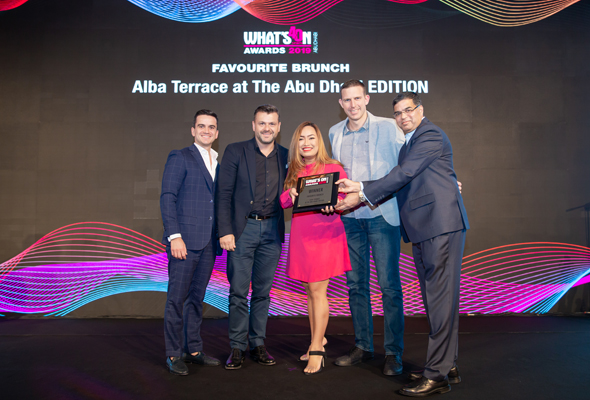 A pleasant afternoon treat, the Rose Brunch is a charming way to enjoy some Mediterranean dishes and excellent live music in a bright and elegant setting. Couple that with the beautiful terrace views and that burrata trolley, and you’ve got yourself an award-winning Friday brunch. 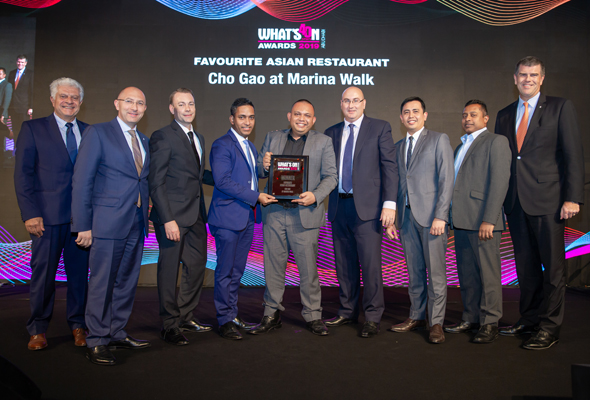 Expect delicious Pan-Asian dishes served in a fun, festive atmosphere at Cho Gao, Marina Walk. The menu features signature dishes from across the continent, and it’s a beautiful spot for a leisurely lunch next to the water by day, with a lively atmosphere by night thanks to a rotation of resident DJs. 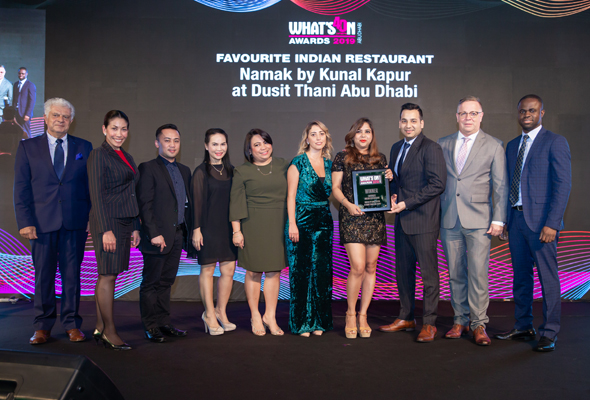 The brainchild of celebrity Indian chef Kunal Kapur, don’t expect traditional cuisine here. Instead you’ll find unique dishes such as chicken tikka stuffed into a Tibetan bun and a smoked chicken soup served in a smoke-filled globe. It really must be seen to be believed. Take our advice: go hungry and take a food journey through its unique offerings. You’ll be glad you did. 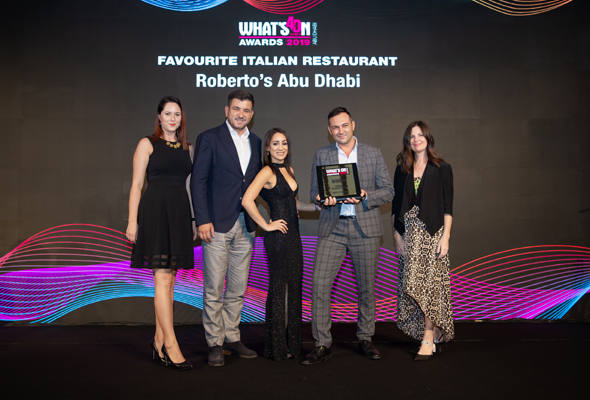 Step out of the capital and into an upscale, cosmopolitan Italian restaurant and lounge when you dine at Roberto’s. With an in-house bakery, brilliant brunch and live music nights, it’s firmly established itself as a homegrown hero in the UAE restaurant scene. 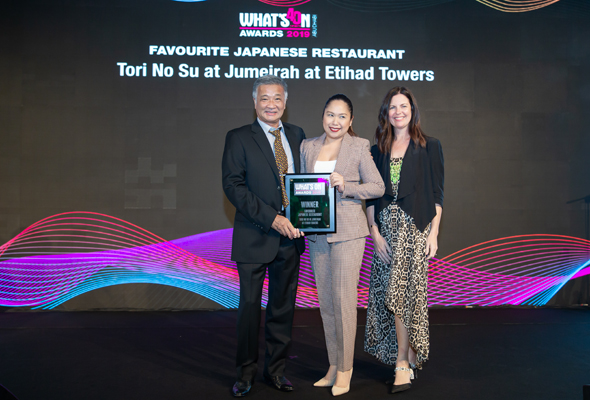 Looking for some top Japanese cuisine in the capital? Look no further than Tori No Su, the gourmet Japanese restaurant in Jumeirah Etihad Towers. 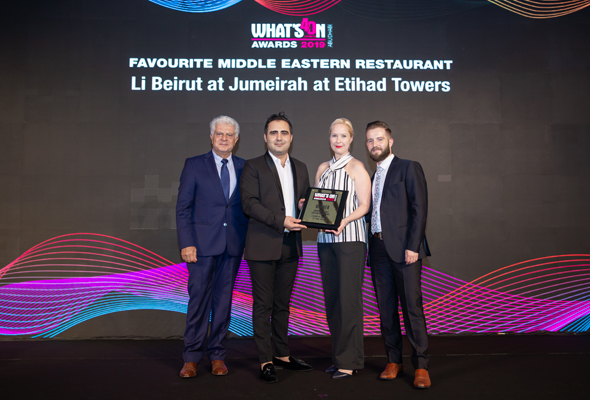 Far more than your classic Lebanese cuisine, book a table at Li Beirut. Open for lunch and dinner, it adds inventive and unique twists to traditional dishes that’ll keep you coming back for more. 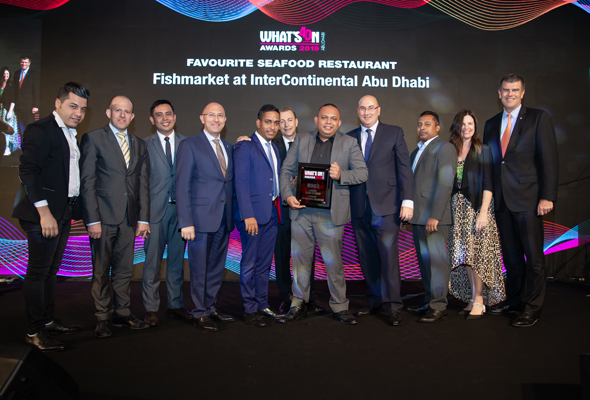 Decked out like a traditional seafood market, expect to dine on the freshest catch at Fishmarket. Found right on the beachfront, it’s stood the test of time thanks to its genuine, friendly service and focus on the freshest ingredients. 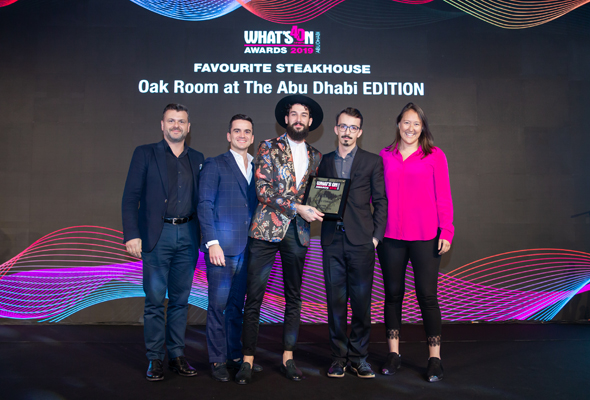 A sleek steakhouse with a celebrity chef, Oak Room is the restaurant everyone in Abu Dhabi’s been talking about in 2019. Celebrity clientele, delicious dishes and sultry interiors are just some of the things that impressed us most. There is so much else to love about this restaurant, too: the hidden entrance, the heavy crystal glassware arranged by size behind the imposing bar, the leather chairs and velvet banquette seating, and the atmospheric lighting 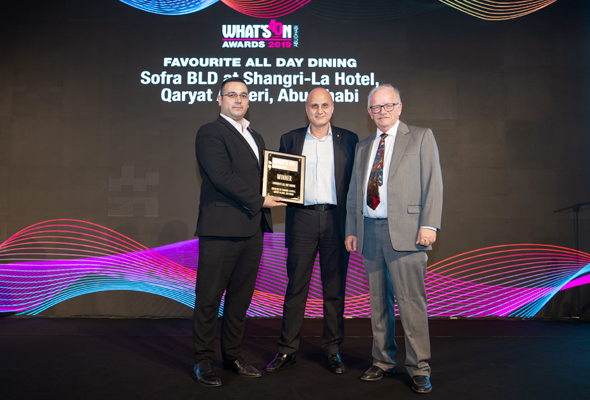 Dine around the world at this Souk-style restaurant, with an impressive array of live cooking stations available for breakfast, lunch and dinner. 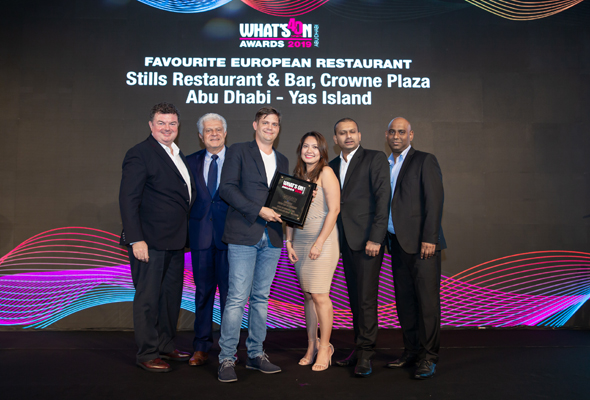 Home to the longest bar in Abu Dhabi at an impressive 26 metres in length, Stills is Abu Dhabi’s best spot for a mix of top European dishes in a casual setting. 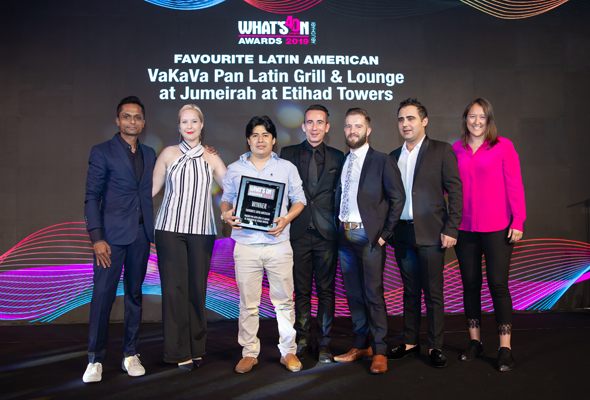 Jumeirah at Etihad Towers set tongues wagging when it welcomed an exciting new restaurant to its repertoire. Latin restaurant VaKaVa is the mischievous twin sister of long-standing UAE favourite, Toro Toro, and now stands in its place in Jumeirah at Etihad Towers. VaKaVa is described as more well-travelled, with a passionate personality, and that’s exactly what it delivers through its inventive Latin American dishes and striking decor. 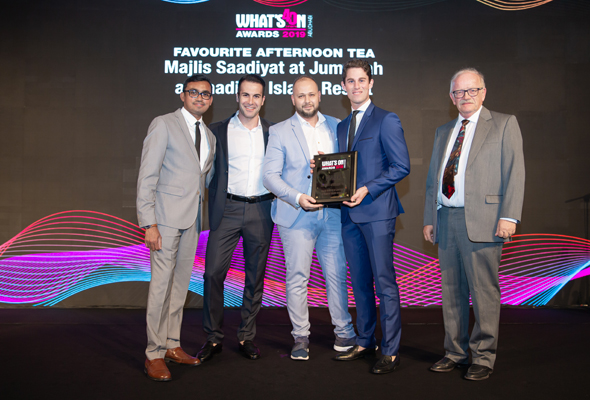 While there are many reasons to visit Jumeirah at Saadiyat Island, the beautiful outdoor terrace at Majlis has to be one of the main ones. The beautiful ocean front setting is the perfect place to wile away an afternoon while enjoying their lavish afternoon tea. 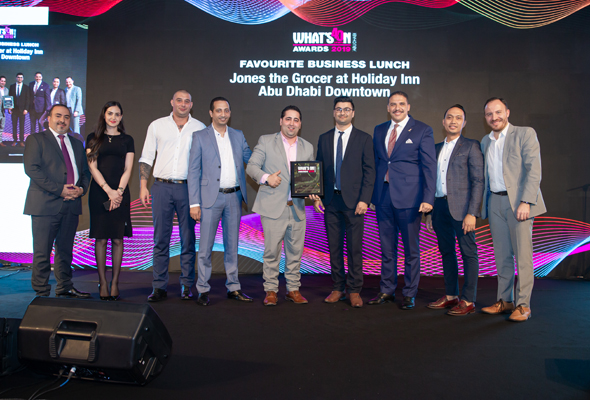 You’d have to travel a pretty hefty distance to find a UAE resident who hasn’t heard of Jones the Grocer. Fuss-free and focused on high-quality ingredients that are locally sourced where possible, their brilliant business lunch is a wallet-friendly Dhs69, inclusive of a hearty main, drink and dessert. 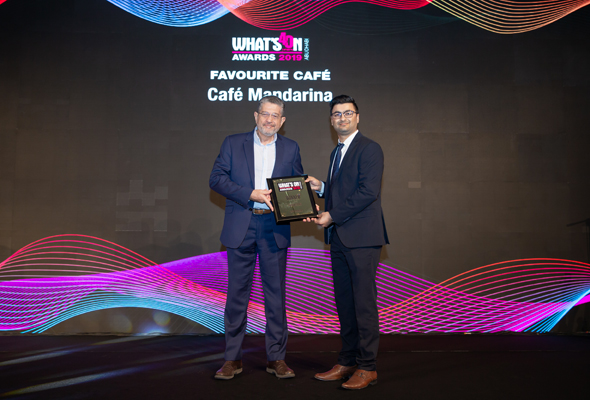 This hidden gem in Al Rabbha is not about the most modern cooking techniques or finely finished dishes, instead it puts its focus on producing fresh, nourishing dishes, this family-run business is a great spot to enjoy lunch with the family, or gathering with friends. 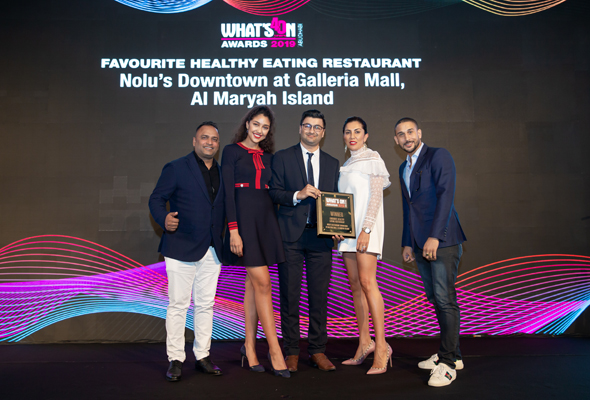 Dishes at Nolu’s are hearty and wholesome in equal measure, inspired by the traditional Afghan recipes owner-chef Marjon Ajami watched her mother bring to passionate Californian foodies. It’s a laid back spot, perfect for a leisurely weekend. 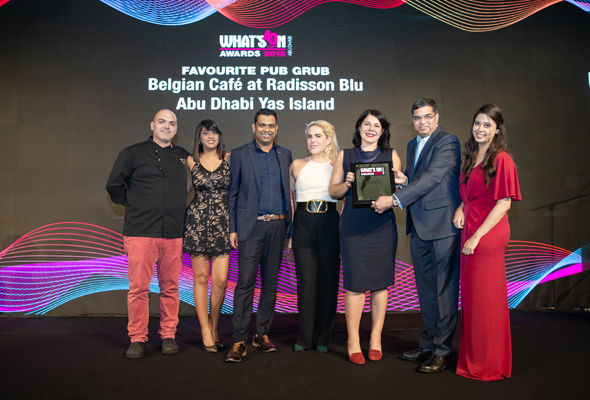 The Yas Island carnation of the popular Belgian Cafe chain is arguably the most popular – and it’s easy to see why. It’s still got that cosy pub feel, without feeling too claustrophobic, and it’s a brilliant spot for a hearty pub meal. 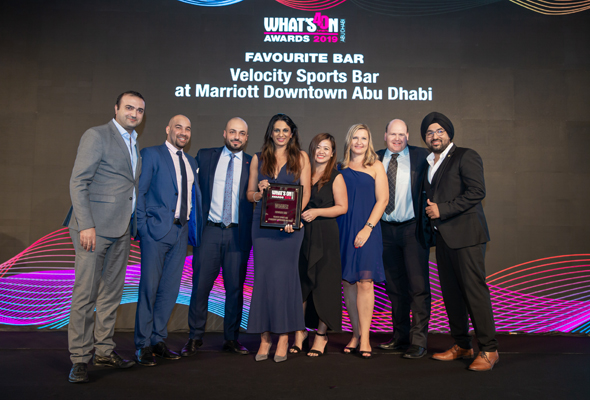 A night out in Abu Dhabi isn’t complete without making your way to Velocity. The popular sports bar is home to quiz nights, happy hours and an after-brunch party that most Abu Dhabi residents have definitely ended up at. 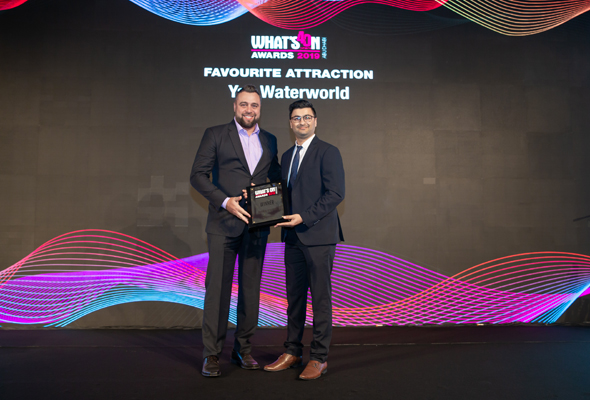 The city’s iconic waterpark has been a top day out since it opened back in 2013. It’s home to more than 40 waterslides, rides and attractions, but it’s not just stuck at that. Year on year it’s brought us new events and activities including a Mermaid School, in-water, 5D cinema and evening pool parties with international artists, and it’s no wonder families keep flocking back. 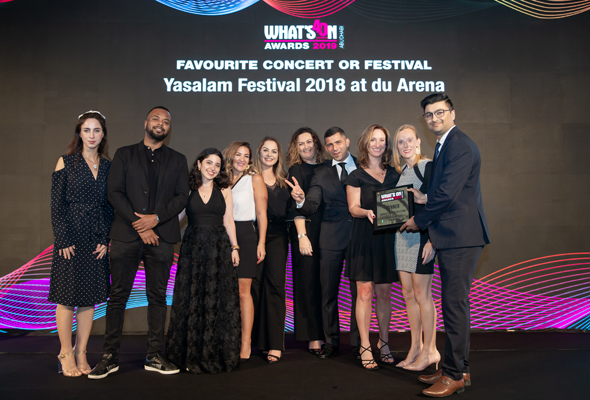 While the Abu Dhabi F1 is one of the biggest events in the sporting calendar, the after-race concerts are arguably the biggest in the music calendar. Bringing four international acts to the city is no mean feat, but Yasalm Festival manage it year in, year out. 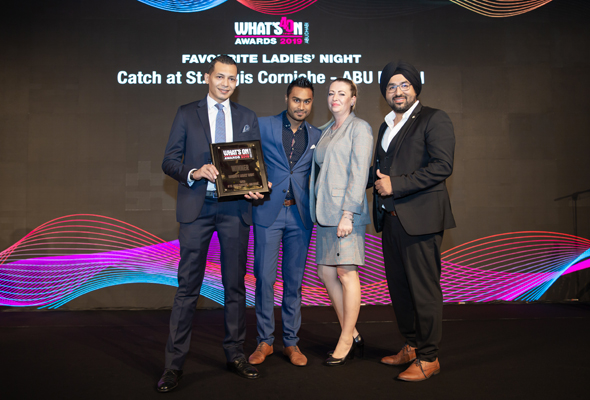 For a mid-week night out, they don’t come better than Catch’s Monday ladies’ night. Offering unlimited drinks for ladies from 9pm to 1am and sweeping views of the seaside from the rooftop, it’s the place to be for a girls get together in the capital. 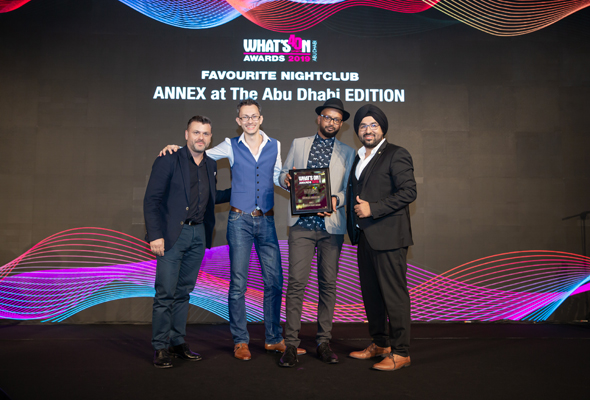 Making a sleek contribution to Abu Dhabi’s rapidly growing nightlife scene is Annex, a sleek social space split over three floors. Whether you’re looking for a rooftop cocktail, chilled drinks with friends over a game of pool or a night of nostalgic disco, Annex is here to shake up the scene in Abu Dhabi. 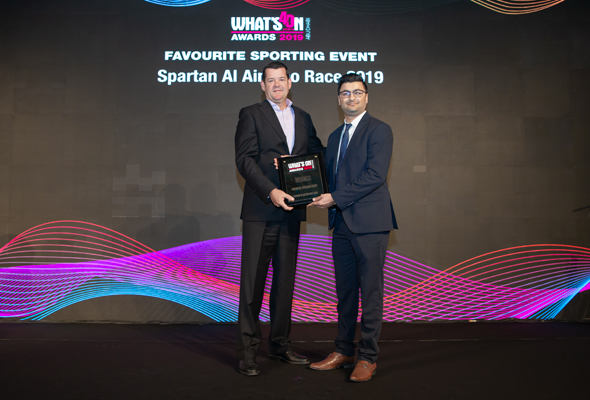 Not one for the fainthearted, this unique obstacle course at Al Ain Zoo saw Abu Dhabi residents bring their serious game faces to tackle more than 20 obstacles over a 5km sprint.

Culture
Eat & Drink
Nightlife
EDITOR’S PICKS
What’s On Nightlife Awards 2021: Here are the nominees...
READ MORE
It's back! What's On Lock In returns to Media One Hotel
READ MORE
Arts and culture: 5 spots we can't wait to visit at Expo 2020 Dubai
READ MORE
UAE petrol prices are set to decrease in September 2021
READ MORE
MOST POPULAR
Pics of the week: Your best photos of the UAE
How to use Playkey.me, the region's first supercharged cloud gaming service
The Mai Dubai half marathon is back in October
Exhibitions, workshops and more to experience at Sharjah Art Foundation
New Irish pub McCafferty's opens second venue in Dubai
YOU SHOULD CHECK OUT
Our website uses cookies and other similar technologies to improve our site and your online experience. By continuing to use our website you consent to cookies being used. Read our privacy policy here.