Know your fare before you ride with RTA's new 'Tech Taxi's'

The initiative has already been introduced in 1,500 taxis…

Dubai’s Roads and Transport Authority (RTA) have launched a new initiative called ‘Tech Taxi’, which will ensure that passengers know the route the driver is taking to their destination before hand, as well as the taxi fare. 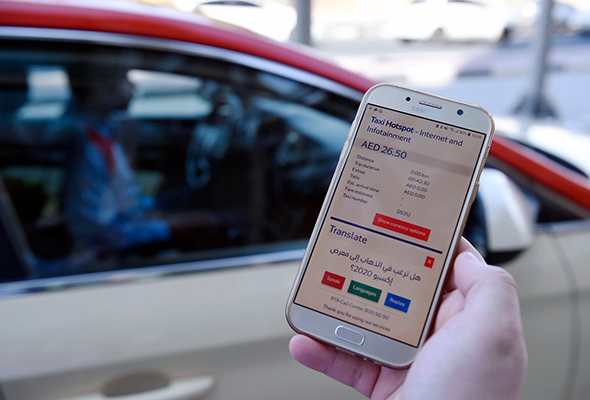 This means that taxi drivers will no longer be able to ‘take you for a ride’ via a much longer route in order to increase the numbers on the meter.

Need to go to one unknown street somewhere in Bur Dubai or Satwa? You don’t have to waste time explaining the location to the driver as this can now be set directly on a map using the service.

The implementation of ‘Tech Taxi’ which began in September 2019, was a move by RTA to digitise the services provided by Dubai taxis. The initiative involved providing free Wifi in Dubai taxis and other digital services to riders which can be accessed using the rider’s smart phones.

So, how it all work?

According to Khaled Al Awadi, once in the taxis, “Once connected (to the WiFi), the rider can log-on to taxiconnect.ae to access an array of digital services”.

One of the options includes communication with the driver, which works using Google technology. This means you will be able to communicate to the driver even though you don’t speak the same language. So far, 26 languages are available.

The service will also enable passengers that are using the service to track their journey and share the map with family or friends.

You will also be able to rate the performance of the driver using this service and you can even provide feedback on the ‘Tech Taxi’ service.