This week saw so many sports stars… 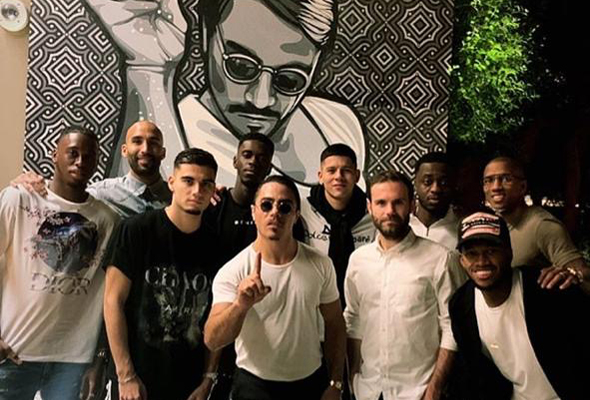 Several of the Manchester United team are in Dubai at the moment, working on their outdoor training regime. Several members of the team including Ashley Young, Aaron Wan-Bissaka, Andreas Pereira and Juan Mata paid a visit to Salt Bae Burger, while some of the football stars also visited Saif Belhasa’s farm Fame Park, and enjoyed downtime while staying at One&Only Royal Mirage.

Dua Lipa performed in Dubai this weekend for a crowd full of excited fans. The New Rules hit-maker took the stage at The Pointe, Palm Jumeirah, thanking Dubai for its energy. “Thank you for making my first trip out here so much fun!!” she said on Instagram.

German-Finnish former Formula 1 champion racing driver, Nico Rosberg, enjoyed a holiday in Dubai with his family this week. Along with his wife Vivian and some friends, Nico stayed at Emerald Palace Kempinski and said he ‘really enjoyed a couple of days together at the beach’.

Liverpool football player James Milner has been in Dubai recently and stopped by The Scene by Simon Rimmer for dinner. The celebrity chef was also in town and very pleased to have the athlete for dinner.

Former Love Island contestant Josh Denzel spent a few days in Dubai this weekend to celebrate a friend’s birthday. He enjoyed time on a yacht, as well as at Bvlgari Yacht Club, visited Nus-ret and White Dubai. It looks like the group are staying at FIVE Jumeirah Village during their stay.

British television and radio presenter, Ore Oduba, is in Dubai enjoying downtime with his wide Portia and their little one. The couple are staying at Anantara the Palm whilst celebrating Portia’s thirtieth birthday.

Love Island contestant India Reynolds has spent the weekend in Dubai with her friends and sister. The group stayed at FIVE Palm Jumeirah and enjoyed a boat party as well as a night at White Dubai.

Chelsea footballer César Azpilicueta has also been enjoying downtime in Dubai this week, and stopped by Fame Park to feed the giraffes.

German-Moroccan rapper Farid Bang is in Dubai exploring the sights including JBR, Four Seasons Jumeirah and Fame Park. The Maghreb Gang hit-maker also enjoyed a boat tour of Bluewaters while he was here.

Former England captain John Terry joined in the fitness fun during the final weekend of the Dubai Fitness Challenge. Taking to Instagram, the retired footballer said it was “Incredible to see Dubai inspiring and encouraging people of all ages and size to work out for 30 minutes every day for 30 days.”

Celebrities
EDITOR’S PICKS
So, when is the next UAE public holiday in 2021?
READ MORE
All of the lavish new hotels set to open in Dubai in 2021
READ MORE
16 of the best pool passes in Dubai that are fully redeemable
READ MORE
All of the restaurants at West Beach, Palm Jumeirah
READ MORE
MOST POPULAR
7 beautiful things to do in Abu Dhabi this weekend: June 24 to 26
10 amazing things to do in Dubai this weekend: June 24 to 26
Celebrate 40 years of JA with 40 per cent off these top resorts
This new breakfast deal includes pool access and Dubai fountain views
Immersive digital art gallery, Infinity des Lumières opens on July 1
YOU SHOULD CHECK OUT
Our website uses cookies and other similar technologies to improve our site and your online experience. By continuing to use our website you consent to cookies being used. Read our privacy policy here.