Zayed National Museum to open in Abu Dhabi in 2021

The stunning museum will tell the story of the late Sheikh Zayed, celebrating his life and achievements…

The striking Zayed National Museum is set to open in Abu Dhabi in 2021, the Department of Culture and Tourism – Abu Dhabi, has confirmed.

The national museum of the UAE promises to tell the story of the late Sheikh Zayed bin Sultan Al Nahyan, celebrating his life and achievements. It will provide a greater understanding of the history, culture and geography of the UAE to its visitors.

A video released by Department of Culture and Tourism – Abu Dhabi on their official Twitter account not only shows the museum’s construction progress, but also offers a quick sneak peak into the museum’s interiors.

Construction on Zayed National Museum, the national museum of the UAE, is underway in the Saadiyat Cultural District, Saadiyat Island #inAbuDhabi pic.twitter.com/aADFLD1Gsq

The striking structures atop the museum have been designed to look like the feathers of a falcon – the national bird of the UAE.

Each of the five steel structures will contain a gallery space showcasing the history and culture of the United Arab Emirates. There will also be a special indoor area dedicated to a live display of hunting birds, one of the many hobbies of Sheikh Zayed. 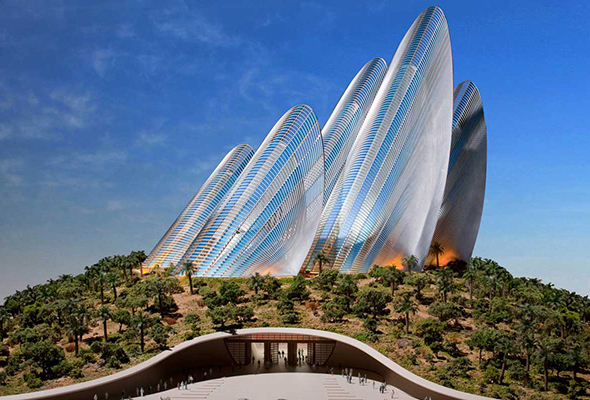 “The galleries are inspired by Sheikh Zayed’s strongly held values, such as a passionate belief in education, conservation, environment, sustainability, heritage and culture, all underpinned by his humanitarianism and strong faith,” reads information on the Abu Dhabi culture official website.

According to The National, the galleries on the ground floor will detail the life of Sheikh Zayed, how the UAE was formed and showcasing the country’s rich natural resources. The first floor will feature a set of four pod-shaped galleries which are suspended over the main atrium will take people on a trip through the history of modern-day UAE.

Saadiyat Island will also be home to the Guggenheim Abu Dhabi, which was first announced back in 2006. Information on the Abu Dhabi culture website describes that the museum will ‘showcase the most important international artistic achievements of the 20th and 21st centuries’. An official opening date for the architecturally stunning culture hub has not yet been given.

Art
Culture
News
EDITOR’S PICKS
Ramadan in Dubai: 48 iftars to try
READ MORE
Where can Dubai residents travel? Check out these 14 destinations
READ MORE
Rumours, facts and reveals: New Abu Dhabi bars and restaurants
READ MORE
UAE announces reduced working hours for Ramadan 2021
READ MORE
MOST POPULAR
#ThisIsNotABuffet: Here's how Alserkal Avenue celebrates Ramadan
Review: Could Hunter & Barrel be your favourite new steakhouse?
French restaurant La Serre to open in Habtoor Palace Dubai later this year
10 amazing things to do in Dubai this weekend: April 22 to 24
Sweet treats to enjoy this Ramadan in Dubai
YOU SHOULD CHECK OUT
Our website uses cookies and other similar technologies to improve our site and your online experience. By continuing to use our website you consent to cookies being used. Read our privacy policy here.