Battle Park, the 500,000 square foot adventure park located in Ghantoot, has launched a new challenge that will have you feeling like you’re a star in your own video game. Priced at Dhs60 per game, iBattle is described as ‘an advanced, none-projectile, high-tech combat gaming system’, meaning it’s fun but also super safe.

The technology was developed by the military, initially used for training purposes, so you know it’s the real deal. Imagine going to spend the day paint balling with all your friends, with the same adrenaline rush but none of the bruises.

There’s eight different outdoor themed fields, so you can choose the type of game you want to immerse yourself in. Whether it’s taking on the Zombie Wars, the Urban Assault course, a Junkyard Raid or tackling a Desert Storm, players of all ages will feel the thrill of the life-like game. 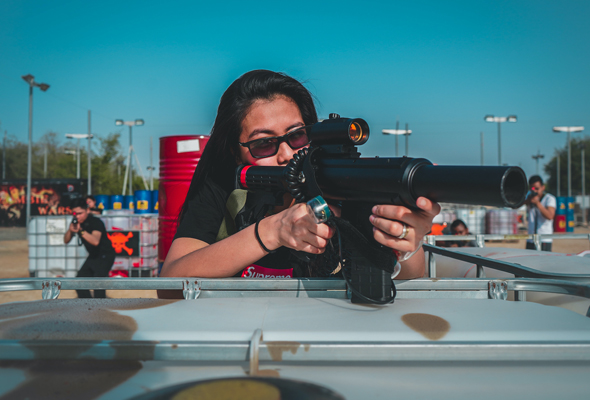 Although there’s no paint to see if you’ve shot someone or been shot, the IR-signal technology will communicate with each player to keep them informed. You’ll also be able to wear your own clothes, with no need for overalls or protective armour.

Ziad El Kassir, Battle Park founder, said: “When the idea came to me to create iBattle I wanted to recreate the online gaming experience in the real world with real guns and a variety of fields to make every game you play different.”

Ripleyâ€™s Believe It or Not! museum is now open at Global Village
16 new UAE attractions we can't wait for

Battle Park, which opened in Ghantoot in 2015, is also home to a range of other exciting adventure games including paintball, and XBattle. The adventure destination also has plans for a second park, which will be located at Last Exit Al Khawaneej, in early 2020.

Things to do
EDITOR’S PICKS
Here's the full list of UAE public holidays in 2023
READ MORE
23 incredible things to look forward to in the UAE in 2023
READ MORE
Hidden gems: 10 UAE desert pop-ups to discover this winter
READ MORE
Where to travel in 2023: 10 new flight routes from the UAE
READ MORE
MOST POPULAR
8 great spots for the tastiest and flakiest pastries in Dubai
An explosion of flavour awaits at Trove Dubai this Valentine's Day
Pop sensation Will.i.am to perform at rooftop club in Dubai
Sushisamba launches ultimate high tea experience
10 romantic ways to celebrate love with Jumeirah
YOU SHOULD CHECK OUT
Our website uses cookies and other similar technologies to improve our site and your online experience. By continuing to use our website you consent to cookies being used. Read our privacy policy here.