This adrenaline-pumping live combat simulator is opening in Dubai

Are you a big fan of laser tag? Or love nothing more than challenging your mates over a video shooter game? Multiply those adrenaline-busting feelings by ten and you’ve got Xstrike – a new live action combat simulation concept opening in Dubai’s Al Quoz.

Officially opening its doors on Friday December 13, Xstrike covers 31,000 square feet, bringing you out of the screen and into a real live-action combat scenario.

Described as a live action experience that “successfully bridges the gap between traditional paintball and laser tag”, Xstrike uses weapons systems and software from iCombat, a leading US live action combat simulation experience.

Combat simulation enthusiasts can get kitted out in the necessary gear, choose their weapon and head into one of two playing fields that closely mimic Hollywood movie sets. 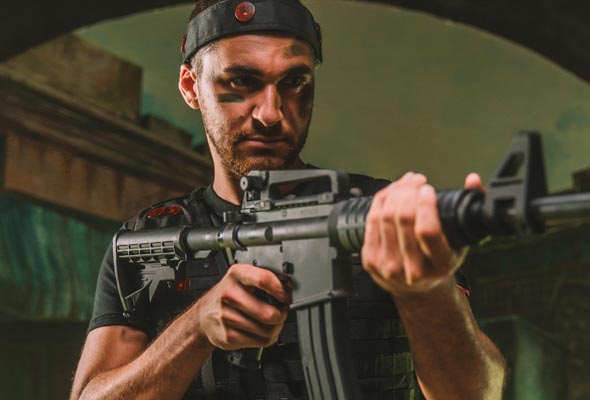 8 fun outdoor activities to try in Dubai this weekend
Adults: Here's 29 places where you can behave like a child in the UAE

The experience sees between two and 40 players split into two teams and sent on different missions, where special effects and custom-made props create the feel of a live-action battle.

You’ll search high and low for the best shooting angles, exploring different fields such as an authentic military-themed Base Camp, a mystical “Post-Apocalyptic City” and an “Abandoned Subway”.

Different missions have their own objectives and rewards, with players and teams able to track their performance throughout the game as well as afterwards on the leaderboard screen.

As well as the main attraction designed for ages 10 and above, Xstrike is also home to the “Tactical Laser Tag”, hero blast and arcade games – so there’s something to keep all gaming fans busy.

Prices for Xstrike start from Dhs89.

Things to do
EDITOR’S PICKS
Ramadan in Dubai: 50 iftars to try
READ MORE
Where can Dubai residents travel? Check out these 14 destinations
READ MORE
Rumours, facts and reveals: New Abu Dhabi bars and restaurants
READ MORE
UAE announces reduced working hours for Ramadan 2021
READ MORE
MOST POPULAR
A four-day ultra marathon is taking place in the Dubai desert
Put the pedal to the metal with free tickets to Ekart Zabeel
Etihad drops massive summer sale with up to 50 per cent off flights
Spend your summer in a snowy cinema in Dubai
Tipsy Lion reopens with wallet-friendly deals all week
YOU SHOULD CHECK OUT
Our website uses cookies and other similar technologies to improve our site and your online experience. By continuing to use our website you consent to cookies being used. Read our privacy policy here.