It’s the most wonderful time of the year again – or is it?

Christmas and New Year’s means booking the right restaurant for kids (big and small), snapping up the best deals while trying not to buckle under the pressure of pleasing everyone.

Well, if you celebrate with the luxury Crowne Plaza Dubai, Sheikh Zayed Road, you’ll be laughing all the way to guaranteed good times. With more than a dozen different deals to take advantage of over Christmas and New Year, we’ve picked out the very best.

Plus, early birds can book and pay before December 15 to get an extra get 20 percent off the bill.

Celebrate Christmas Eve by indulging in a seasonal buffet with a variety of international specialities and live cooking stations including Asian, Italian, Middle Eastern delicacies and much more.

Celebrate Christmas Eve in Brazilian style with a rodizio package featuring 18 different cuts of prime meat, as well as salad and dessert stations. Party the night away with live Latin music performed by the resident band.

Escape into an exotic island-like atmosphere and celebrate Christmas Eve with an eclectic four-course dinner and tropical drinks. Dance all night with live music performed by the resident band. 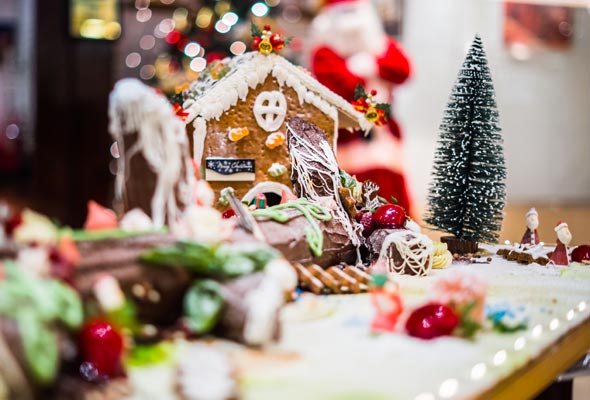 If you missed the Christmas Eve special three-course menu fear not, chefs will rustle up the same menu for the special occasion. To recap, options include parsnip soup to start, pan-seared salmon tournedos and king prawns or turkey saltimbocca for mains and an obligatory Christmas pudding to finish. Again, expect festive grape.

Swap your Turkey dinners for endless South American steak, steak and steak. It’s all served direct to your table while samba dancers and the resident Latin band keep the party, fiesta, forever going all night long.

Mix up your traditional Christmas roast by making your way around the authentic Japanese buffet. Don’t miss the Sakura signature rolls, they’re unlimited might we remind you, and the simply delicious sashimi.

Party like a pirate and ring in the New Year with a five-course dinner featuring Polynesian favourites: macadamia nut crusted hammour, wood-fired salmon and Mai Tai crème brûlée – just to name a few.

Dress to impress for a festive Brazilian white party. Alongside prime meat served on skewers directly to your table, treat yourself to some French bubbles.

This is top value package for party people this New Year. Plus, join in the retro party and feast on a traditional pub grub buffet served from live cooking stations.

Christmas
EDITOR’S PICKS
Ramadan in Dubai: 40 iftars to try
READ MORE
Where can Dubai residents travel? Check out these 14 destinations
READ MORE
Rumours, facts and reveals: New Abu Dhabi bars and restaurants
READ MORE
UAE announces reduced working hours for Ramadan 2021
READ MORE
MOST POPULAR
Sheraton Mall of the Emirates has a lot to offer this Ramadan
Looking for a cosy long stay residence in Dubai? Check this out...
Have you spotted the new Talabat Patrol team on Abu Dhabi roads?
Iftar home delivery for one? Here are some options...
Stunning Australian restaurant Hunter & Barrel is now open
YOU SHOULD CHECK OUT
Our website uses cookies and other similar technologies to improve our site and your online experience. By continuing to use our website you consent to cookies being used. Read our privacy policy here.