You'll soon be able to hire Careem Bikes all over Dubai

Memberships will cost between Dhs2 and Dhs20 per day…

Are you looking for an affordable and healthy way to get around the city? Well, soon you’ll be able to as Careem Bikes are set to launch soon – with smart bicycles and docking stations across Dubai.

A date for beginning to implement the new bike-pool system was not given but docking stations have begun to be installed across the city, so we can expect to start using them soon.

Careem Bikes are rented on a membership basis, which can be daily, weekly, monthly or yearly basis. You’ll select your membership through the soon-to-launch app called Careem Bike which will be available on the Google Play and App Store.

Daily memberships will cost Dhs20, weekly it will be Dhs45, monthly is only Dhs69 and a yearly membership is priced at Dhs399 – that’s Dhs2 per day.

You can ride your bike as many times as you like during the chosen period, but only up to 60 minutes at a time. After one-hour if you haven’t returned the bike, you’ll be charged an overtime fee of Dhs20 per 60 minutes. Once you’re done just return your Careem Bike to the bicycle rack closest to your destination. 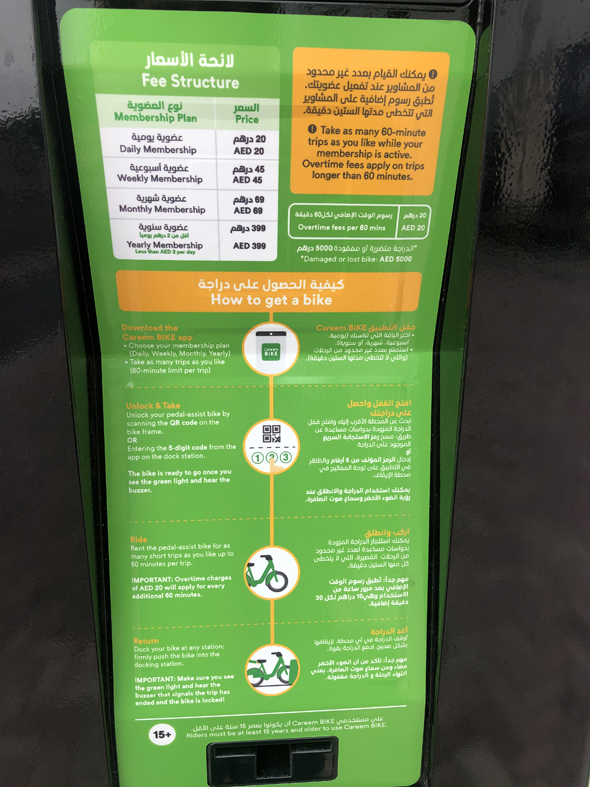 According to Careem, the bikes are pedal-assisted through electronic motors and are super easy to use. ‘Instead of twisting or pressing a throttle to activate the motor, you can just start pedalling and the motor will power up automatically’, the support website says.

Riders must be over the age of 15 to use a Careem Bike, and Careem recommends that riders wear a helmet, although it doesn’t look like one will be provided.

Announced as part of a deal with Dubai’s Roads and Transport Authority (RTA), no less than 1,750 bikes and 175 stations will be introduced in Dubai over the next two years.

Careem’s smart system will connect the bikes together through GPS, allowing them to track each bike’s locations and predict congested areas. They’re even doing their bit for the environment, with solar-powered bike racks connected to a wireless network.

Sport & Fitness
Transport
EDITOR’S PICKS
So, when is the next UAE public holiday in 2021?
READ MORE
All of the lavish new hotels set to open in Dubai in 2021
READ MORE
16 of the best pool passes in Dubai that are fully redeemable
READ MORE
All of the restaurants at West Beach, Palm Jumeirah
READ MORE
MOST POPULAR
Brunch is back: 9 of the best brunches to book this weekend
Abu Dhabi Golf Club now has a Golden Night pool pass deal
Dubai bars reopen for vaccinated residents, brunches can resume
Get your heart pumping at this brand-new Fitness First club
Here's where you'll find some of the most breathtaking views of Dubai
YOU SHOULD CHECK OUT
Our website uses cookies and other similar technologies to improve our site and your online experience. By continuing to use our website you consent to cookies being used. Read our privacy policy here.