From Arsenal’s camel riding adventures to Maluma’s Coca-Cola Arena performance, here are all the celebrities we’ve spotted in the UAE this week… 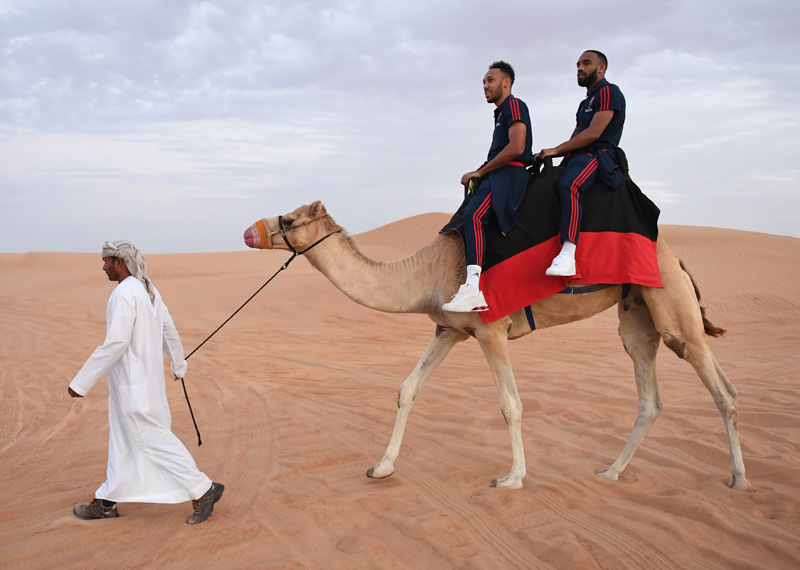 Arsenal Football Club took some time out of their hectic Dubai schedule to enjoy a desert experience. Arabian Adventures showed the team Dubai Desert Conservation Reserve (DDCR), the UAE’s first national park. After a bit of dune bashing and camel riding, they were treated to an Arabic dinner at the camp.

Colombian singer Maluma was in Dubai to host a concert at Coca Cola Arena. He stayed luxurious Al Habtoor City hotel, Habtoor Palace and got to test drive a few supercars.

Not content with just one week in Dubai, Charlotte Crosby stayed for another. It looks like she stayed at FIVE Palm Jumeirah, as well as checking out the new ladies’ day at Paradise Beach and WET Deck at W Dubai – The Palm.

Ivanka Trump is in the UAE to keynote the We-Fi Regional Summit at the Global Women’s Forum Dubai happening on Sunday February 16. Before the event she went to Abu Dhabi to visit the Sheikh Zayed Grand Mosque and Louvre.

American rapper Young MA was in Dubai to perform at superclub White Dubai this weekend. While she was here she also paid a visit to Fame Park and rode dune buggies in the desert.

Former professional boxer Wladimir Klitschko was in the UAE for the Milken Conference in Abu Dhabi. While he was here, he also came to Dubai and enjoyed dinner at Caesars Resort Bluewaters restaurant Paru.

Everton Football Club player Alexander Iwobi is also in Dubai for some warm weather training. During his visit, he went to check out Fame Park and spent some time with the animals there.

Celebrities
EDITOR’S PICKS
13 Sheikh Hamdan-approved restaurants in Dubai
READ MORE
Dubai brunches temporarily banned in new preventative measures
READ MORE
12 upcoming Dubai mega-projects we can't wait for
READ MORE
16 of the best beach bars in Dubai for sundowners
READ MORE
MOST POPULAR
Abu Dhabi restaurants where you can celebrate your love of Spritz
6 great beachside breakfast spots to try in Dubai this weekend
7 great deals to check out in Original Wings & Rings in March
Throwback: Check out these photos of the UAE's first hotel
5 empowering ways to celebrate International Women's Day in Dubai
YOU SHOULD CHECK OUT
Our website uses cookies and other similar technologies to improve our site and your online experience. By continuing to use our website you consent to cookies being used. Read our privacy policy here.