Watch: Jetman soars across Dubai in a special world first

If you were around Skydive Dubai on Friday February 14 and happened to notice a man soaring through the skies, your eyes weren’t playing tricks on you. It was Expo2020 and Jetman Dubai – smashing world records again – and one step closer to their mission of achieving a 100 per cent autonomous human flight. 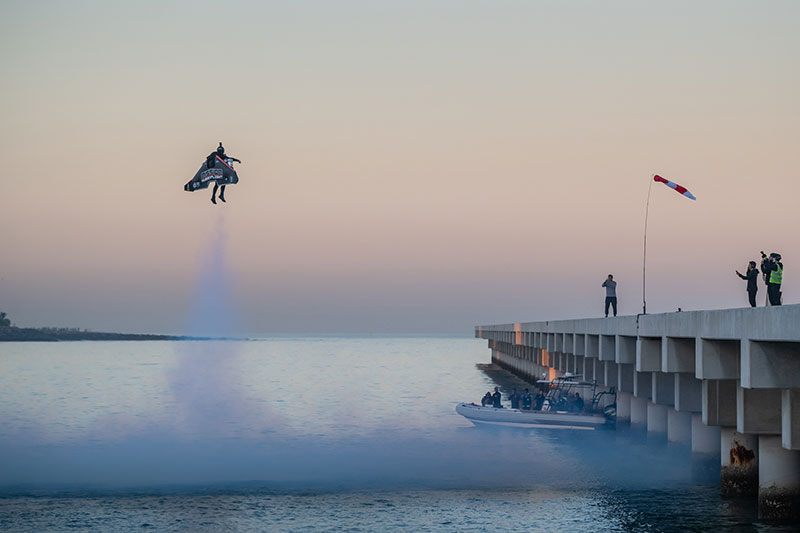 Jetman was equipped with a carbon fibre wing powered by four mini jet engines. The only controls he had was his human body.

How high up did he actually get? He reached an altitude of about 1,800m  – that’s twice as tall as the Burj Khalifa. This milestone proved that Jetman can now fly directly upwards from a standing start without the need for an elevated platform.

According to a release, Reffet hovered five metres above the waters of the Arabian Gulf for 100 seconds. After ensuring he had full control, Reffet landed and took off again and headed towards Jumeirah Beach Residence slowly building speed and height.

His entire experience lasted three minutes and he ended his stunt with a a roll and a loop at 1,800m altitude before opening his parachute and landing back at Skydive Dubai.

Here’s the super cool stunt in all its glory…

HH Sheikh Hamdan bin Mohammed bin Rashid Al Maktoum Crown Prince of Dubai was also present at the launch, which he posted to his official Instagram account with a text that read ‘A major milestone in the quest to achieve 100% autonomous human flight. Well done boys.’

While this trick may have been accomplished before, this is the first time a Jetman pilot was able to combine safely hovering at a low altitude and flying aerobatics at a high altitude in the same flight.

But Expo2020 and Jetman hope to accomplish more in the near future. Shortly after landing Reffet stated “One of the next objectives is to land back on the ground after a flight at altitude, without needing to open a parachute. It’s being worked on.”

The accomplishment was a landmark moment for Expo2020 and its theme ‘Connecting Minds, Creating the Future’.  Aysha Al Nuaimi, who is leading the project for Expo 2020 Dubai stated “It’s fitting that the stunt was performed here in the UAE, the nation of no limits, as Expo 2020 and Jetman Dubai continue to highlight that anything is possible when you combine innovation, passion, creativity and hard work.”