A guide to what's closed under Abu Dhabi's preventative measures

With public safety being the primary concern, some public spaces in the capital have been temporarily closed…

To help minimise any potential health risk to the public during the current global COVID-19 outbreak, government agencies in the UAE have put in place a series of proactive and protective measures.

This includes the temporary closure of certain public spaces in Abu Dhabi, either until the end of March or beyond.

The Department of Culture and Tourism – Abu Dhabi, announced as part of its ongoing efforts limit the potential spread of COVID-19, that all nightclubs will be closed until the end of March.

The DOH's new website cuts through the noise surrounding coronavirus
Sheikh Hamdan announces reduction on DEWA bills for 3 months
Dubai Tourism suspends events, bars and nightclubs until end of March
Here's what the UAE's temporary visa suspension means for you

Abu Dhabi City Municipality has announced the closure of all beaches, from Sunday, March 15, 2020 until further notice. Jubail Mangrove Park and Al Wathba Wetland Reserve will also remain closed until the end of March. Parks were closed, but have since reopened following a deep clean. 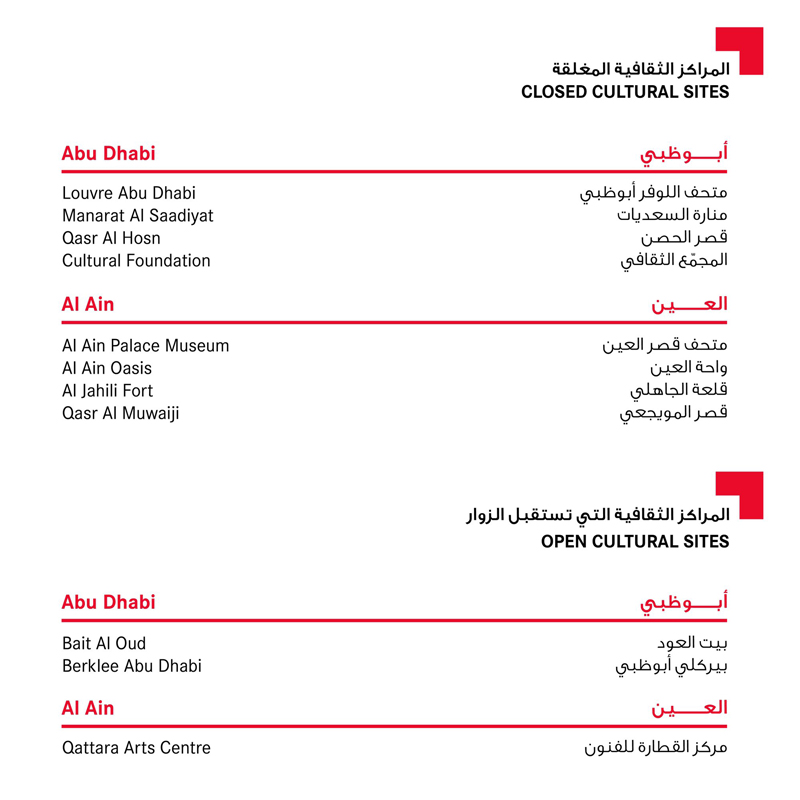 Many cultural sites in Abu Dhabi have also been temporarily closed for the protection of visitors and staff. The Department of Culture and Tourism – Abu Dhabi has announced that Louvre Abu Dhabi, Manarat Saadiyat, Qasr Al Hosn, Abu Dhabi Cultural Foundation, Qasr Al Watan Tour, Al Ain Palace Museum, Al Ain Oasis, Al Jahili Fort and Qasr Al Muwaiji will be closed until the end of March.
A separate notification was issued by the UAE’s Ministry of Presidential Affairs confirming that the Sheikh Zayed Grand Mosque would be closed to visitors until further notice.

A number of events and festivals have been postponed in the capital. These include VidCon (now taking place in December 2020); Club Social Abu Dhabi (indefinitely); Abu Dhabi International Book Fair (postponed until May 2021); Ultra (indefinitely); Mother of the Nation festival (delayed until Q4 2020); Russ — Coca-Cola Arena (postponed until November 27); the Dubai International Boat Show (now booked in for November 2020); and Dubai Lynx, which is now rescheduled for September 2020.

Spring break was brought forward as educational institutions were closed on March 8 for a period of four weeks. In that time the Ministry of Education instructed facilities to carry out deep clean sterilisations and implement eLearning facilities in accordance with the ‘Learn from Afar’ programme.

The Abu Dhabi Department of Economic Development (ADDED) has confirmed that “entertainment destinations” will be temporarily closed across the capital. This includes movie theatres and videogame centres and lounges. Those breaking the restrictions could face a fine of between Dhs3,000 and Dhs10,000 under ADDED’s Article 72. These facilities will remain closed “until further notice.”

What’s on will endeavour to keep you up-to-date on all further developments. For what you can do to help reduce risk of contraction, and the latest COVID-19 statistics, jump on the Department of Health – Abu Dhabi’s (DOH) new COVID-19 website.

News
Things to do
EDITOR’S PICKS
Here's the full list of UAE public holidays in 2023
READ MORE
23 incredible things to look forward to in the UAE in 2023
READ MORE
Hidden gems: 10 UAE desert pop-ups to discover this winter
READ MORE
Where to travel in 2023: 10 new flight routes from the UAE
READ MORE
MOST POPULAR
6 brilliant things to do in Abu Dhabi this week: Feb 6 to 9
Dubai tourism increases by a massive 97 per cent
16 incredible mega projects coming to Abu Dhabi soon
The epic Asian Le Mans Series returns to Dubai Autodrome this month
Snapped: Celebrities spotted in the UAE this week
YOU SHOULD CHECK OUT
Our website uses cookies and other similar technologies to improve our site and your online experience. By continuing to use our website you consent to cookies being used. Read our privacy policy here.