From actors to reality stars, it’s been a busy week for celebs in the UAE…

A post shared by Michele Morrone (@iammichelemorroneofficial) on Oct 31, 2020 at 7:04am PDT

Actor Michele Morrone told us in a recent interview that he’ll be staying in Dubai for a while to work on some projects, including the above campaign with fashion brand Guess.

Known for: British TV show – The Only Way is Essex

Reality personality and new mum Chloe has brought her daughter to Dubai for some winter sun. The pair have been enjoying relaxing beach days for the past week. 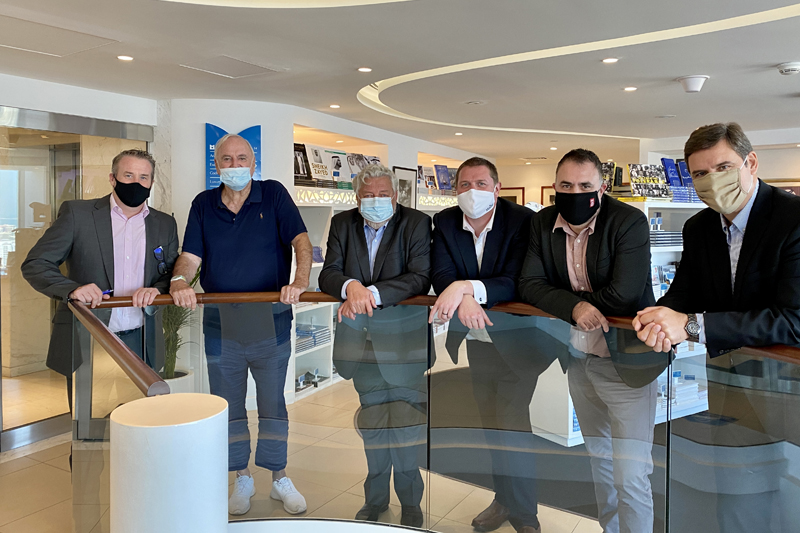 John Cleese has revealed he’ll be staying in Dubai for a while to work on some exciting projects. One of which will be working with the newly launched Motivate Talent agency, helping out on a series of events over the next two months, as well as entertaining through after-dinner speaking and special appearances at Covid-compliant events.

Amber Davies is in Dubai at the moment with her boyfriend. The pair are staying at Five Palm Jumeirah and have enjoyed beach days at Drift and Summersalt, as well as dinner at Thiptara.

Regular Dubai visitor, Tyrone, is back again enjoying the sights. He was spotted mostly hanging out at Five Palm Jumeirah, as well as jet skiing at JBR.

Kaz has revealed she’ll be staying in Dubai for the next month, however we’re yet to see what she’ll be getting up to while she’s here.

Ellie was here with her friend and fellow Love Islander, Stephanie Lam. The pair enjoyed beach days as well as a yacht trip.

Known for: British TV show – The Only Way is Essex

Jess and her mum Carol extended their trip by another week to enjoy more of what Dubai has to offer, including dinner at Siddharta Lounge and Play.

Known for: British TV shows – Ex on the Beach, The Only Way is Essex, Celebrity Big Brother

Megan got plenty of tanning in during her week in Dubai, while she was staying at Westin Mina Seyahi.

Celebrities
EDITOR’S PICKS
So, when is the next UAE public holiday in 2021?
READ MORE
All of the lavish new hotels set to open in Dubai in 2021
READ MORE
16 of the best pool passes in Dubai that are fully redeemable
READ MORE
All of the restaurants at West Beach, Palm Jumeirah
READ MORE
MOST POPULAR
The best deals we've found in Amazon's Prime Day sale
This new salon package includes lunch, manicure and blow dry for Dhs150
Glastonbury comes to Dubai with Reform's one-off brunch
Folly launches five-week masterclass programme for aspiring chefs
World-famous attraction Madame Tussauds to open in Dubai this year
YOU SHOULD CHECK OUT
Our website uses cookies and other similar technologies to improve our site and your online experience. By continuing to use our website you consent to cookies being used. Read our privacy policy here.