Want the best seat in the house when the clock strikes 12? 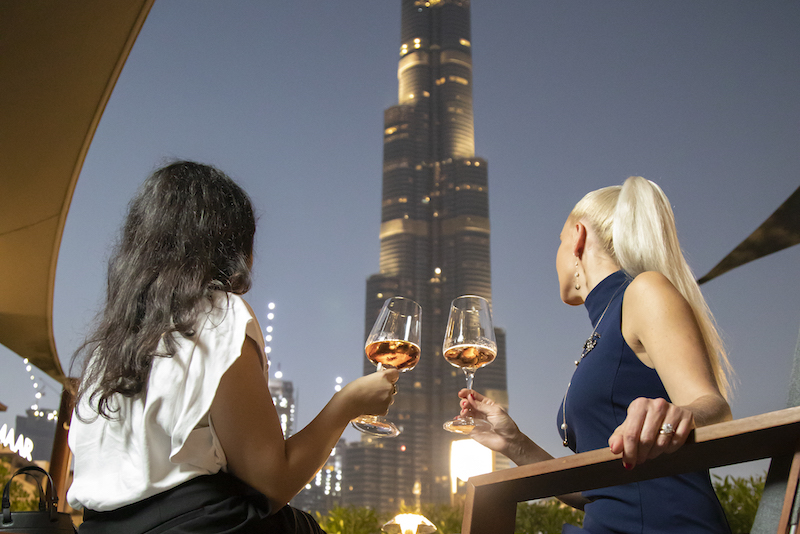 If you’re feeling particularly flush, book one of the restaurant terrace tables at 99 Sushi, which will give you an uninterrupted view of the Burj Khalifa. It’ll set you back a cool Dhs4,500, inclusive of a 14-course meal, free-flowing drinks, and a glass of Champagne at midnight. 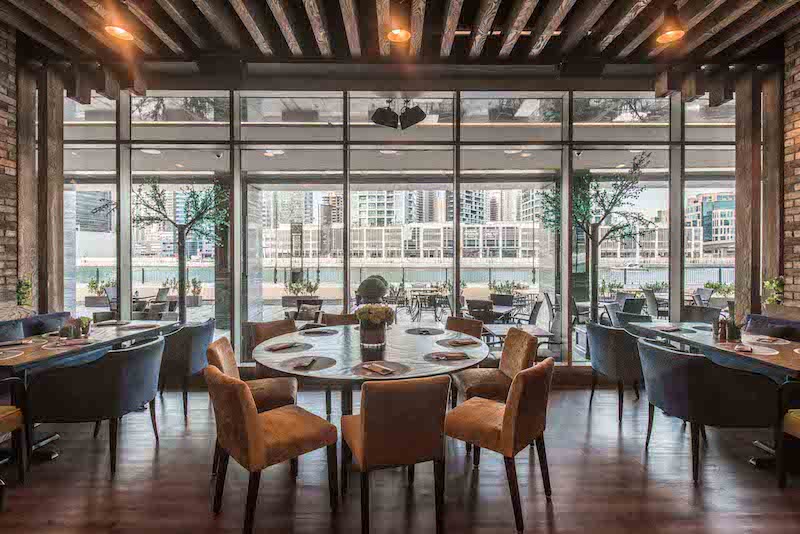 One of the more affordable options for Burj Khalifa views on New Year’s Eve, Beau Rivage Bistro is offering a generous buffet of international flavours, including live cooking stations and desserts, paired with free-flowing drinks. There’s live entertainment and spectacular views of the Dubai Canal and Burj Khalifa from the outdoor terrace. Prices start from Dhs495. 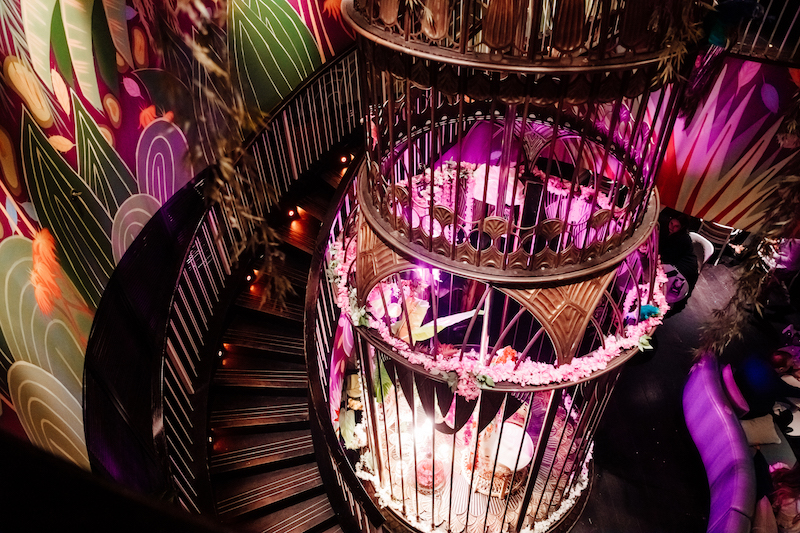 A decadent New Year’s Eve awaits at the top of the JW Marriott Marquis, with 360-degree views of the city and the glittering Burj Khalifa. Expect a momentous banquet packed with the explosive flavours of Latin America and beyond. Mrs Buendia’s dancers and resident DJ Kio will keep you entertained while you wait for the countdown. 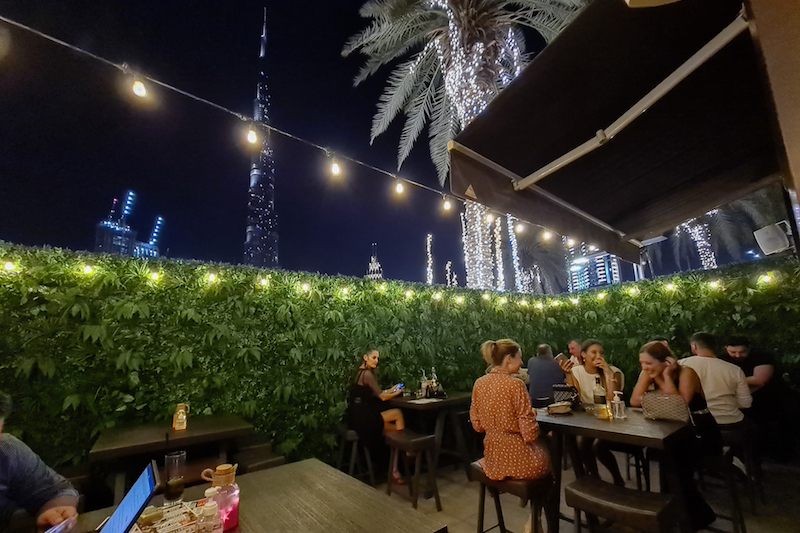 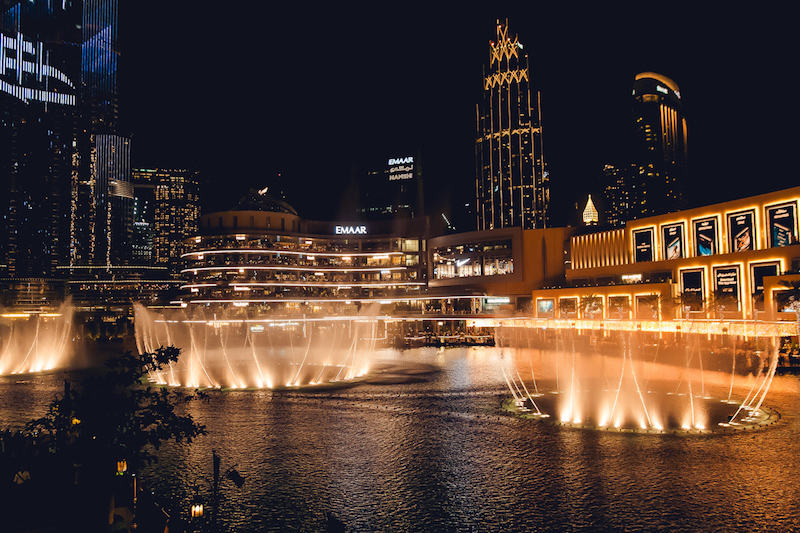 Karma Kafe is bringing the glitter to Downtown Dubai, with a Sequin Samurai party on New Year’s Eve. Catch incredible Burj Khalifa views form the Karma Kafe terrace, with happy hour from 5pm to 9pm, a food and drinks package from 9pm to 1am, and a cash bar after that. 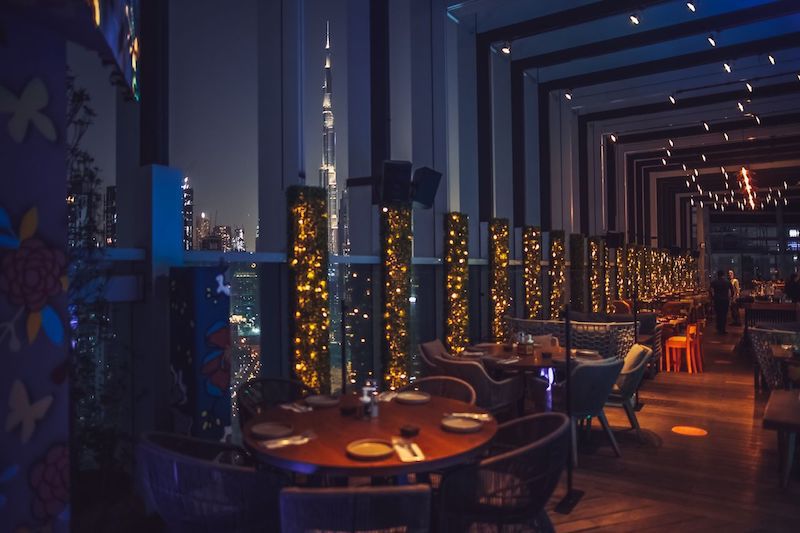 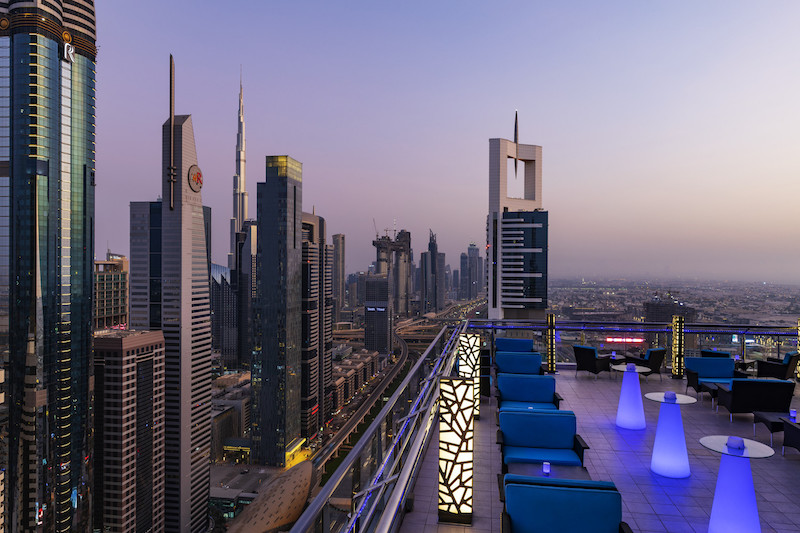 Hightail it to the lofty Level 43 Sky Lounge, at Four Points by Sheraton on Sheikh Zayed Road, for a bird’s-eye view of the Burj Khalifa (and the rest of Dubai). It’s Dhs800 for a three-course menu and free-flowing drinks, from 8pm to 2.30am. 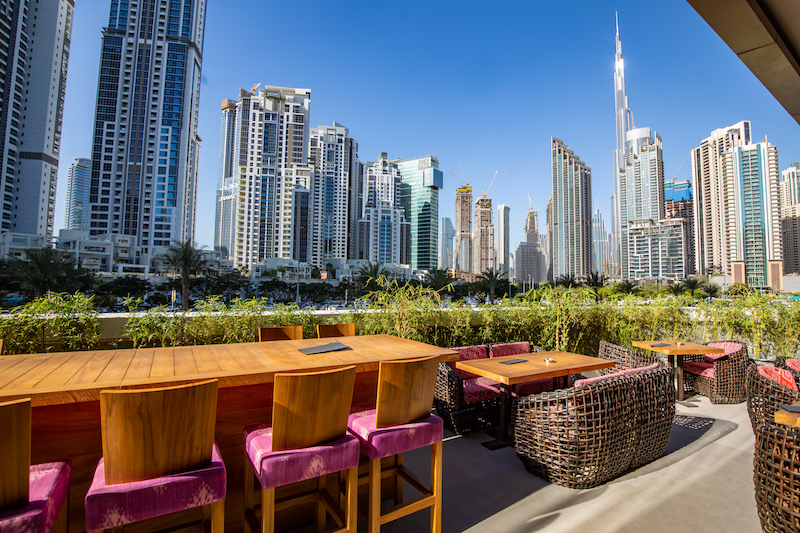 One of the better value deals going around, Roka has set a minimum spend of Dhs550 per person for a seat on the view-blessed terrace (it’s Dhs450 per person for an indoor table). There’s a choice of a la carte dining or a set menu, and there are two seatings available, from 6.30pm to 8.30pm, or the prime time slot from 9.30pm. 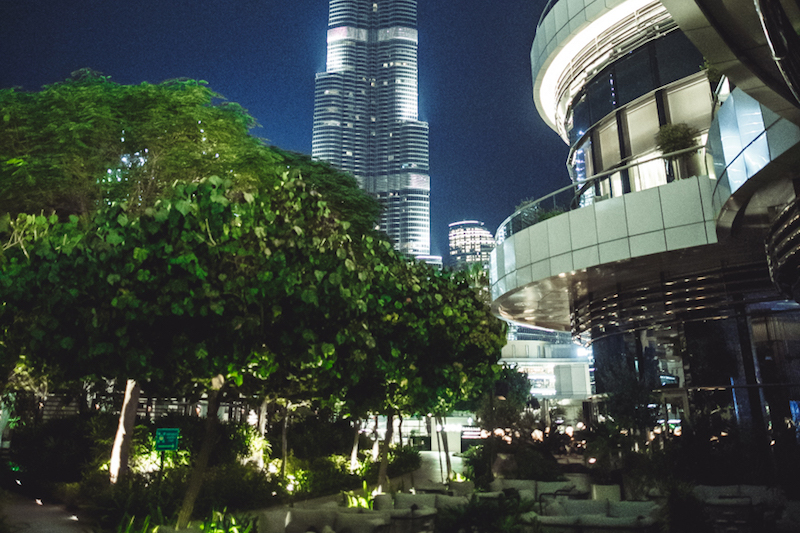 Catch all the action of Burj Khalifa from STK Downtown. Get the night off to a flying start with happy hour from 5pm to 9pm, then sit down for your New Year’s feast from 9pm to 1am. A cash bar will be in operation from 1am to 2am. 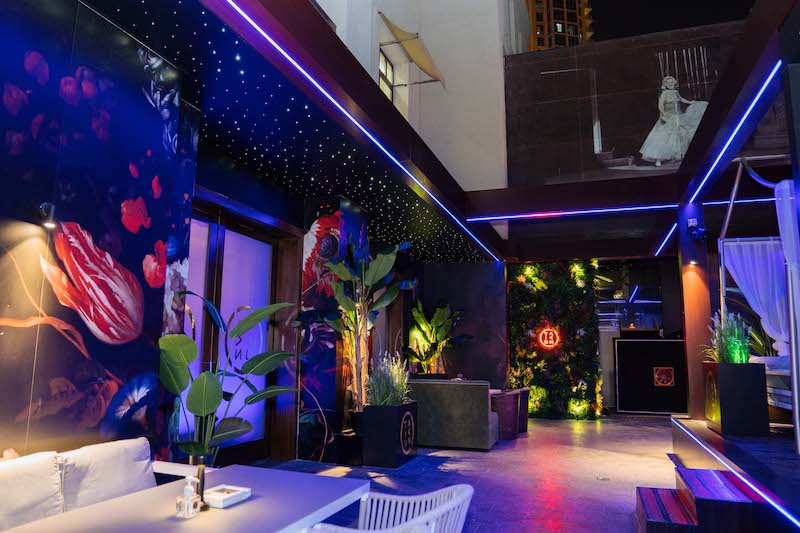 Taikun restaurant and lounge is hosting a Goldfinger-themed New Year’s Eve party, with scintillating live performances throughout the evening. If you can draw your eyes away from the stage, the garden area here boasts views of the Burj Khalifa. The four-hour package includes a set menu of pan-Asian flavours, paired with free-flowing drinks. 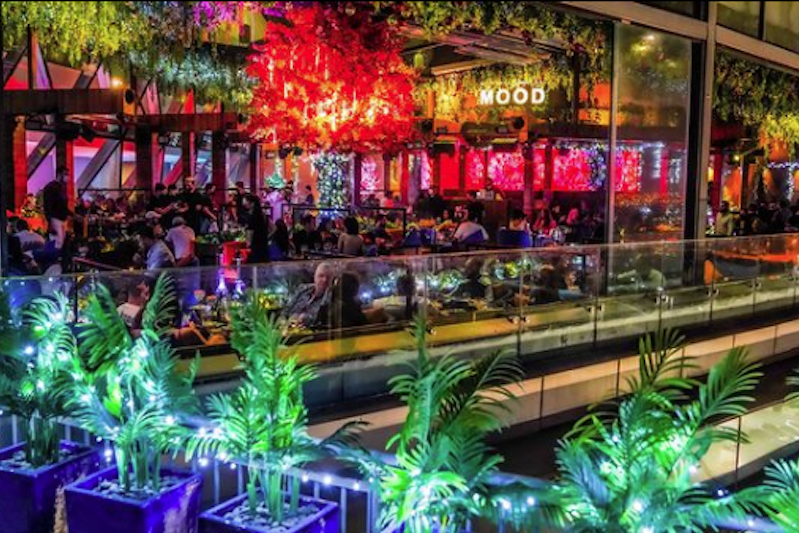 From the Mood Rooftop Lounge at The Meydan Hotel, soak up an unobstructed view of Downtown Dubai, including the sparkling Burj Khalifa. Enjoy live entertainment from DJs Aseel, Amory and Tamer and Kefah & African band, with a set menu of food and drinks for a minimum spend of Dhs1,500 per person. 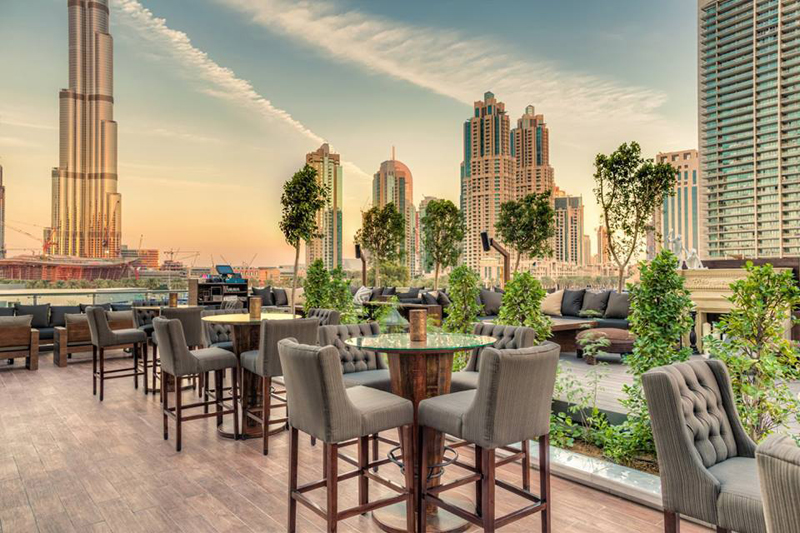 The terrace at Treehouse at Taj Dubai boasts seriously good views of the Burj Khalifa fireworks. There’s a range of packages to choose from, including bottomless drinks, live grills and fresh oysters. 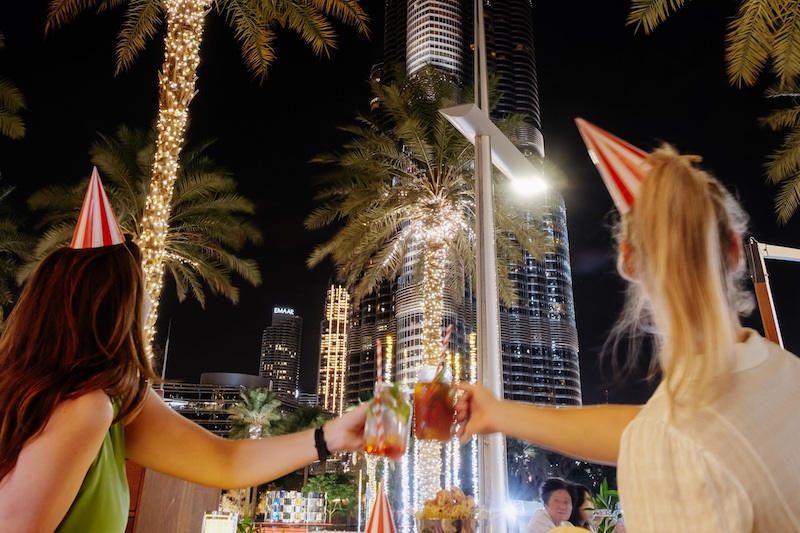 Fan of Vietnamese food? Head here for an all-you-can-eat table-service menu with unlimited street food favorites, live DJ, party favors and stunning views of the Burj Khalifa’s fireworks. Get your tickets for Dhs699 per person for indoor seating and Dhs899 per person for outdoor seating. 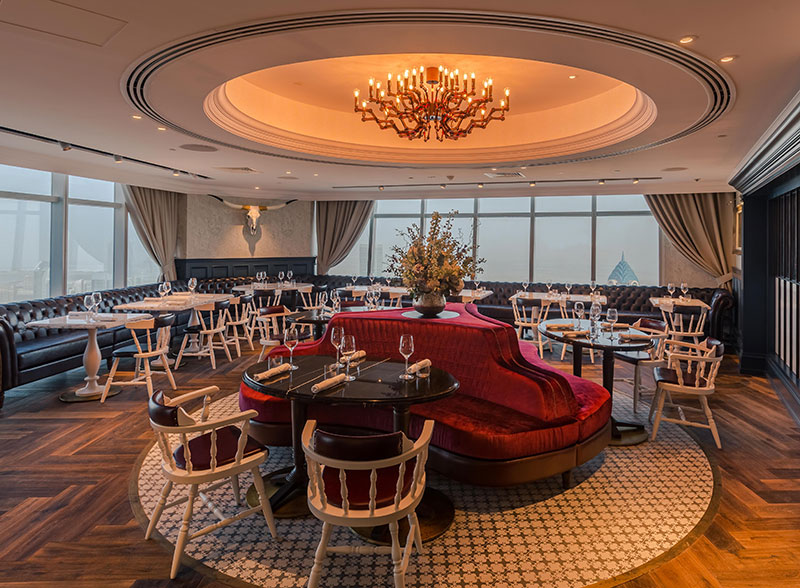 For something a little different… 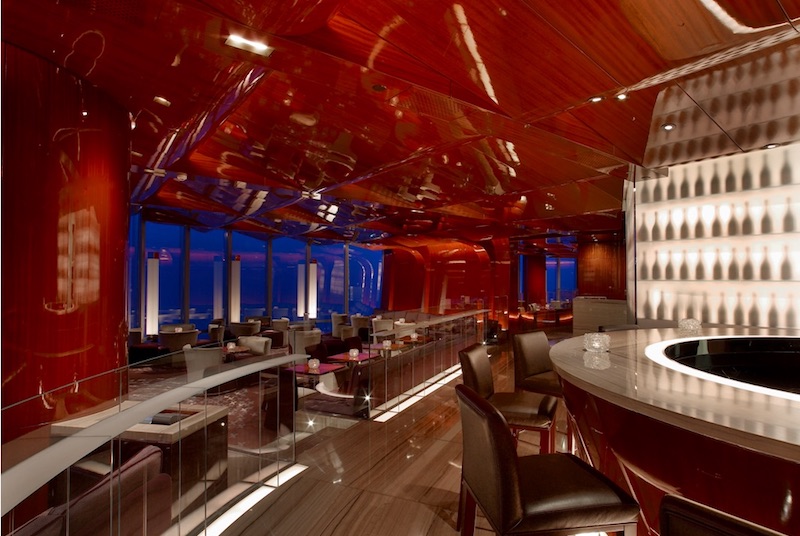 If you feel like you’ve seen the Burj Khalifa fireworks from every angle, then Atmosphere’s New Year’s Eve party promises a fresh outlook. Watch the Burj Khalifa New Year’s Eve fireworks from inside the building itself. The privilege doesn’t come cheap, with seats priced at Dhs3,000 for a nine-course menu, free-flowing Champagne and cocktails for seven hours. But the bragging rights? Priceless.

Eat & Drink
Nightlife
Restaurants
EDITOR’S PICKS
Ramadan in Dubai: 48 iftars to try
READ MORE
Where can Dubai residents travel? Check out these 14 destinations
READ MORE
Rumours, facts and reveals: New Abu Dhabi bars and restaurants
READ MORE
UAE announces reduced working hours for Ramadan 2021
READ MORE
MOST POPULAR
The UK and eight other countries added to Abu Dhabi Green List
Breaking: Flights from India to UAE suspended for 10 days
A sweet new Japanese restaurant has opened in The Greens
Book a Yas Hilton Ramadan stay and play package from Dhs396pp
There's a cool new coffee shop to check out in Dubai
YOU SHOULD CHECK OUT
Our website uses cookies and other similar technologies to improve our site and your online experience. By continuing to use our website you consent to cookies being used. Read our privacy policy here.