With huge celebrities as fans and queues around the block, what is it about this young chef’s restaurant that gets people so excited?

Burak Özdemir is the most famous chef you’ve probably never heard of. The Turkish restauranteur is the man behind a TikTok account with 30 million followers, and an 18 million-strong Instagram account, both named CznBurak.

At just 26 years old, having already launching six successful restaurant in Turkey, Burak set his sights on Dubai for his next challenge. CznBurak Dubai opened on December 25, 2020 and naturally, What’s On Dubai was keen to see what all the fuss was about.

The huge ground floor space can be found on the corner of Sheikh Mohammed bin Rashid Boulevard, across the road from Address Downtown. We arrive at the earlybird time of 6.30pm and there’s already a wait for a table in the 600-seat restaurant.

There’s both indoor and outdoor seating, but the alfresco terrace offers Burj Khalifa views under the twinkling fairy lights of the Boulevard. The venue is well-staffed and everyone knows their role, leading to a seamless operation throughout the night. 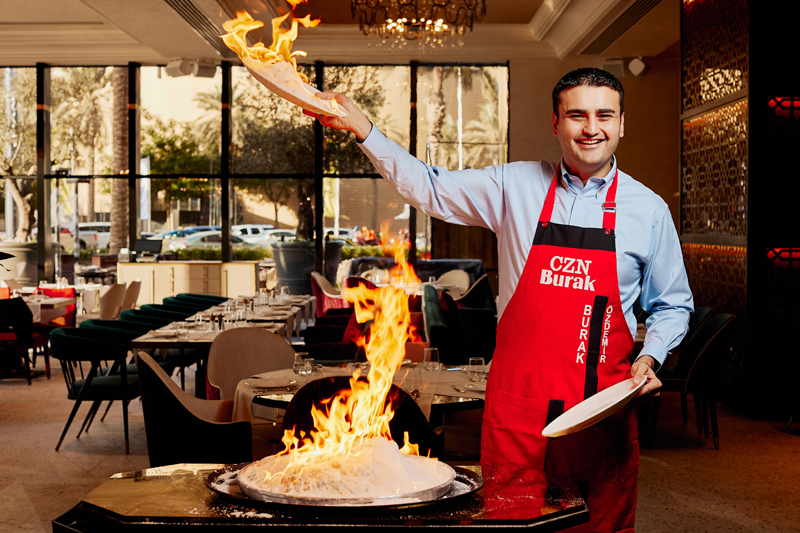 Middle Eastern wooden trolleys roll around the venue, delivering food and entertainment in one – and it seems this is what the people came for. An experience that blends food with music and performance, waiters present meals to the sound of clanging drums while flaming salt is repeatedly tossed in the air.

As an unlicensed restaurant, guests come to get their kicks through dine-tainment shows, shisha and the hopes of catching a glimpse of Chef Burak himself.

So what about the food? The menu isn’t minimal but lacks variety, three types of hummus can be found in the starters, and lamb features heavily in the main courses – an element in 14 out of the 16 choices. Most plates are designed to be shared between two to four people and come with the aforementioned show.

Hummus with meat (Dhs47) was unlike we’ve ever had before in the sense that it arrived warm with a soft crust. It’s a strange change that takes a while to get used to but the beef chunks in the centre are very tender and flavourful. 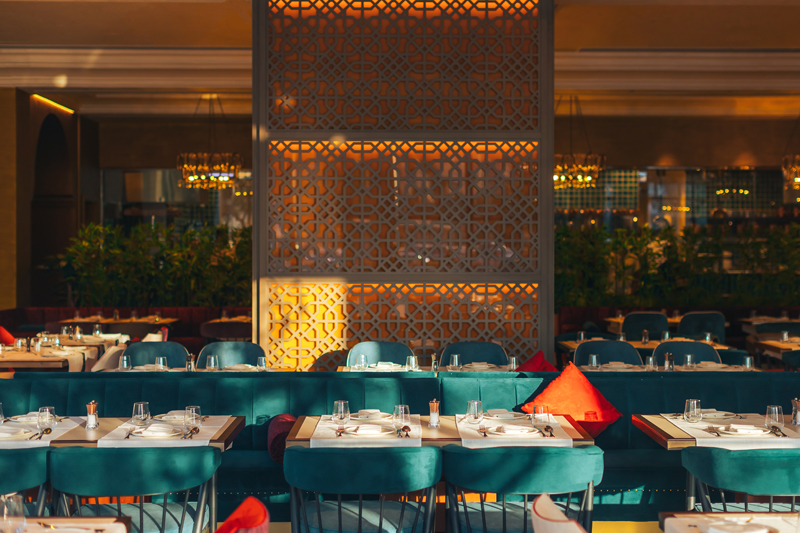 From the kebab and grill section we played it safe with a mixed grill for one (Dhs104), which could’ve easily fed two people. The platter includes marinated beef and lamb, as well as chicken shish, tomato-flavoured rice, roasted veg and Arabic bread.

We also opted for a beef casserole with eggplant (Dhs225) which arrived in a large clay dish. Creamy aubergine puree bubbles and oozes from the top forming a crispy top, while underneath the smooth sauce pairs well with a portion of soft beef cubes.

Of course we couldn’t leave without trying Burak’s famous cheese kunafa (Dhs55). The slice was thankfully not as large as those in his TikTok videos, but looked just as appetising with stretchy melted cheese in the middle. The Hatay syrup was a little too sweet for our liking but the shredded kadayif added a pleasant crunch to the dish.

As we made our way out of the door, we were surprised to see a queue of people forming down the street to get a table at this hotspot. The venue doesn’t accept reservations so if you are keen to check it out, we recommend to arrive as early as we did.

Reviews
EDITOR’S PICKS
Ramadan in Dubai: 50 iftars to try
READ MORE
Where can Dubai residents travel? Check out these 14 destinations
READ MORE
Rumours, facts and reveals: New Abu Dhabi bars and restaurants
READ MORE
UAE announces reduced working hours for Ramadan 2021
READ MORE
MOST POPULAR
A four-day ultra marathon is taking place in the Dubai desert
Put the pedal to the metal with free tickets to Ekart Zabeel
Etihad drops massive summer sale with up to 50 per cent off flights
Spend your summer in a snowy cinema in Dubai
Tipsy Lion reopens with wallet-friendly deals all week
YOU SHOULD CHECK OUT
Our website uses cookies and other similar technologies to improve our site and your online experience. By continuing to use our website you consent to cookies being used. Read our privacy policy here.