Could this double brunch really be the best of both worlds..?

Adding two great things together doesn’t always guarantee that the resultant compound will also be great. If you need an example for reference purposes, we submit Nicole Kidman and Will Ferrell’s 2005 romcom, Bewitched.

On paper, however, combining the culinary craft from one of the capital’s most beloved Pan-Asian restaurants with leading Latin meatery, Chamas — instantly looks like a passionate marriage that’s built to last.

We’re here at this new Saturday Duo brunch to see for ourselves what sort of union is formed from the collision of these two culinary worlds, and we’ve taken a seat amongst the dark wood partitions and playful Asian decor of Cho Gao.

In this section of the brunch, let’s call it ‘the Eastside’ (any resemblance to a 90s hip hop beef is purely coincidental) we find a selection of neat Eastern tapas-sized dishes. We build up a tasting plate of yum looking cha — chicken shumai, vegetable gyoza, chocolate bao; some sticky chicken wings and a few varied pieces of maki. 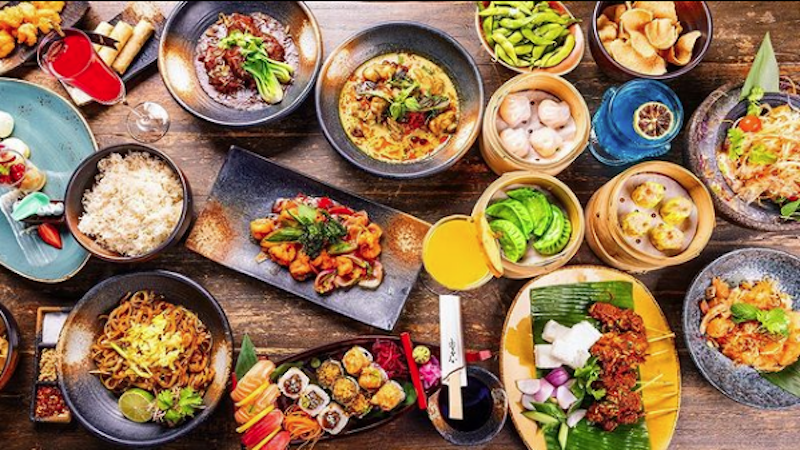 The ensemble is good, a tier above most brunch dim sum — but our first wow moment comes courtesy of the chicken and rice stand. When you’ve racked up a rotisserie count as high as ours, you know honing in on breast meat is a rookie hustle. It’s all about those paunchy thighs, and the juicy oysters plucked from just behind the haunches. This was a near perfect roast, the meat spoke in eloquent flavour, and the feisty chilli sauce that went with it lives in our palate’s memory bank rent free.

Although we confess to feeling a little terriorial, we walk over to Chamas’ ‘Southside’ without any clicking of fingers or flipping of gang signs. Here we load up on South American churrasco-prepared meats that have earned the restaurant a trophy cabinet of awards and critical acclaim. Here too we stop for ceviche and salads, citrus-dressed tacos and oceanic nibbly bits. 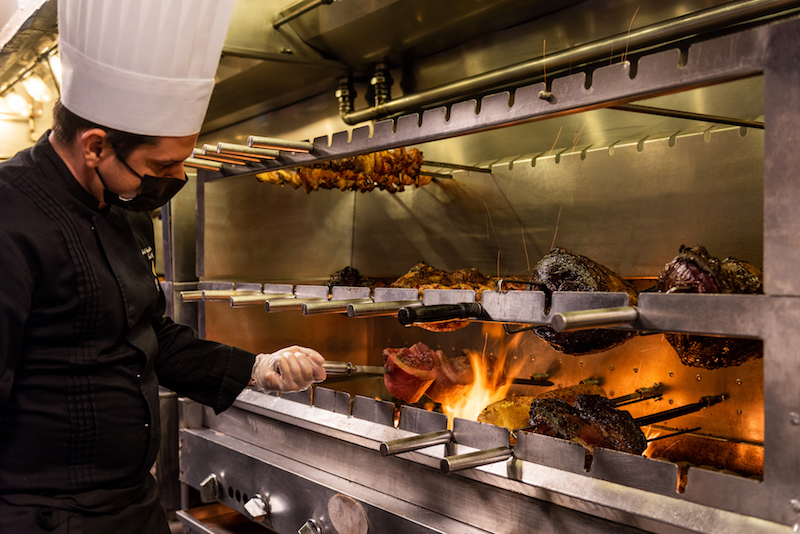 We’ve visited Chamas before and are delighted to confirm the calibre continuum carries through. These are elite meats, slithers of flame-fanned sirloin carved straight on to your plate, thick tranches of medium rare picanha, and tender salt-crust fillet served with seared cinnamon-topped pineapple.

There is no question over the quality, the precook marination ritual or the skill of kitchen staff. Big, loud, Latin carnival mouthfuls. If this does turn into a gang war, we’re switching sides. Whilst it doesn’t neglect the plant-based or seafood fans, we find that above all else, Duo is essential brunching for the capital’s discerning carnivores.

Verdict: With packages from Dhs249, this feels like a firm name in the hat for brunch of the year. The desserts only add further furore to the cause. Their vanilla ice cream is out there making all the right kind of headlines. Rating: A

Brunch
Eat & Drink
Reviews
Things to do
EDITOR’S PICKS
UAE holiday dates announced for Eid Al Adha
READ MORE
Another update: Emirates extends suspension of flights from India to UAE
READ MORE
Coming soon: Everything we know about Ain Dubai so far
READ MORE
Khorfakkan set to open new tourist attraction 580 metres above sea level
READ MORE
MOST POPULAR
It's Dhs350 to brunch, stay and play at the What's On Lock In this weekend
After party: 8 of Dubai's best after-brunch deals on a Friday
Jones The Grocer is bringing its cheese, grape and jazz night to Abu Dhabi
A two-day art festival is taking place in Alserkal Avenue this weekend
Transport to Greece as Opa's monthly brunch returns
Al Qana update: Abu Dhabi mega project announces four new F&B outlets
YOU SHOULD CHECK OUT
Our website uses cookies and other similar technologies to improve our site and your online experience. By continuing to use our website you consent to cookies being used. Read our privacy policy here.