Supercar review: What happened when What's On rented a Lamborghini

Culture
Tech
Things to do
Transport

Some say his hair is 115 per cent bleach, and he has a pathological fear of David Blane, all we know is — he’s not The Stig…

When I was growing up, my brother used to have a poster of a Lamborghini on his wall. It was a phantom white Countach, a model the luxury Italian car manufacturer has just remixed and relaunched for the car’s 50th anniversary. We, my brother and I, made a pact back then — that one day he’d have his Lamborghini and I’d have a Ferrari, together we’d fight crime and never steer away from any sweet jumps. Today, I get to steal my brother’s dream.

As I drive towards the pick-up location, I confess a mix of apprehension and excitement. The only supercars I’ve ever driven have been entirely constructed from pixels, and they’ve rarely passed the finish line in insurable condition. There are no ‘restart race’ options on the pause menu of real life, my rational brain is telling me, but if supercars were built to be rational — we wouldn’t have posters of them on our walls. 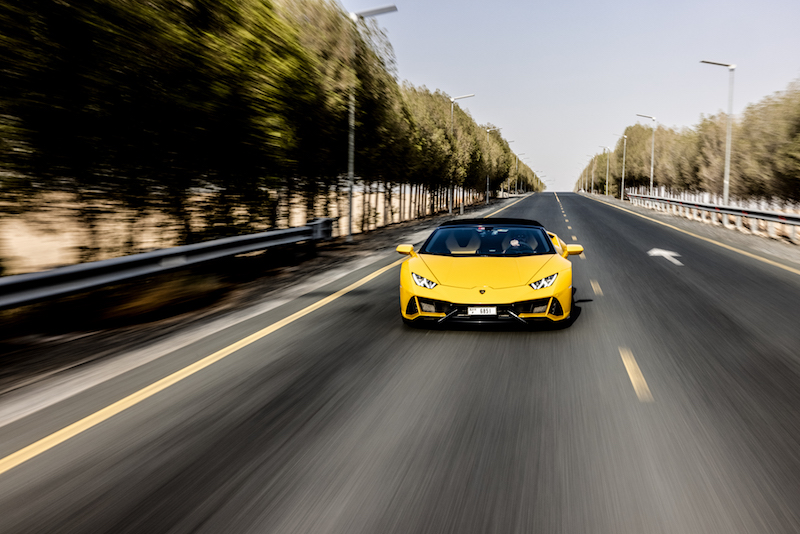 Luxury Supercar Rentals Dubai has its hub at Gulf Court Hotel in Business Bay, and as I approach, it feels like I’m entering the Toretto family garage. It’s not uncommon to see a supercar outside a Dubai hotel, but when you see 10 or 12 all lined up, either there’s a crypto convention in town, or something very special is going down.

And it is special, Luxury Supercar Rentals Dubai offers an elite fleet of fantasy horsepower, from McLarens to Rollers, to G Wags kitted up to the nines with Brabus swag, available at prices from Dhs1,000 per day. I’m picking up a 2021 model Lamborghini Huracán Evo Spyder (Dhs4,500) in canary yellow. It’s outrageous, a straight 10 on the audacity scale, it looks like it’s been driven straight outta 2031, and growls like a cornered wild cat when I plunge my finger into the ignition well.

After a brief orientation session, I’m free to roam, but where does one go in 1.5 million dirhams worth of automotive sass?

I ask myself ‘where would James Bond go?’ I mean, if his route wasn’t dictated by having to stalk dubiously-accented carnage-mongers. ‘The desert’, I decide. So off to Al Qudra I go. 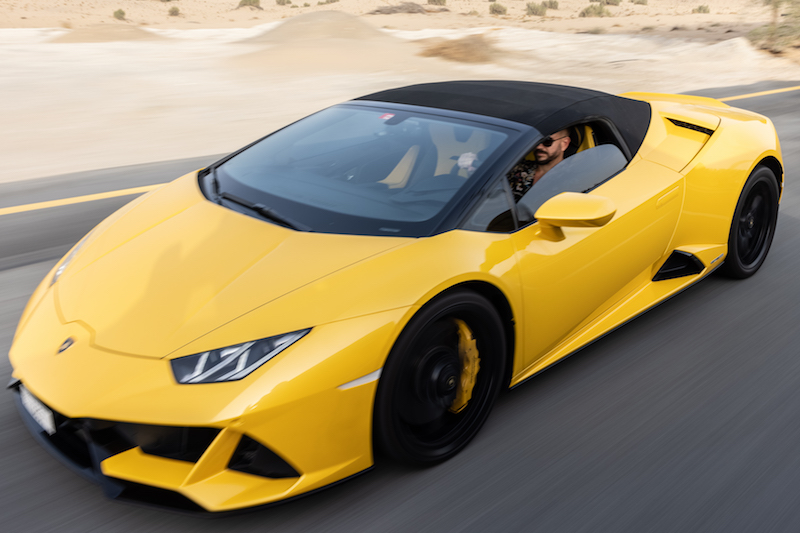 This Lambo has a V10 engine, pushing out around 630BHP, and can hit a speed of 100kph from a standing start in about 3.5 seconds. All of this means *Jeremy Clarkson voice* that it moves quicker than your stomach after a dodgy shawarma.

But it doesn’t have to, in the fully automatic mode it glides gracefully through lunch hour Business Bay traffic, it even has a Q-Branch approved nose lift for getting over speed bumps delicately. It feels measured, precise and elegant, like a neatly coiffured pedigree greyhound.

@whatsondubaiHave you even lived in Dubai if you haven’t rented a lambo tho? Whip care of Luxury Supercar Rentals ##Dubai ##whatsondubai ##lamborghini @lamborghini♬ original sound – What’s On Dubai

Whilst stopped at red lights, I keep expecting that guy from TikTok to come up to me and ask what I do for a living, and I’d either have to come up with a lie on the spot like ‘I’m a financial transpondster’ or I tell him the truth and he walks away with a vastly unrealistic expectation of regional journalist salaries.

He never materialises thankfully, and as the roads blend into the solace of surrounding dunes, and the cars become as infrequent as clouds in the Dubai sky, I slip into the semi-manual flappy paddle mode and that debonair greyhound transforms into a slathering timberwolf.

Immediately after hitting the gas, my body is thrust into a rollercoaster corkscrew of jowl-clapping Gs. My internal organs feel like they’re trying to rearrange themselves into the shape of the wow emoji. It’s quite literally breathtaking, but never, not even for a fraction of a second, does it feel like control is slipping away. 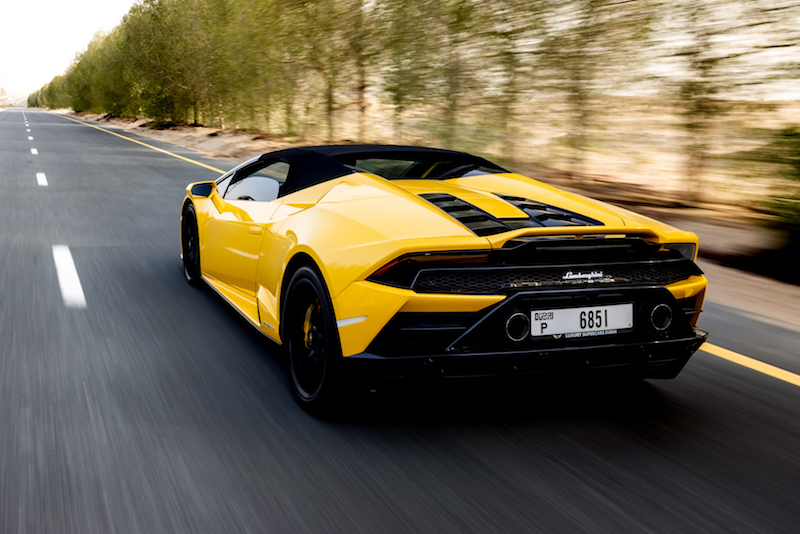 For legal reasons I stress, we’re only talking about going up to the governmentally prescribed speed limits of course, and although the acceleration feels intergalactic, the same engineering that enables such jumps into hyperspace, also keeps you perfectly stable.

With the sun’s light leaking into the desert sands, it’s time to hand this poetic little beast back. Whilst it’s truly been an honour to go out and road trip with such a sophisticated date, the background anxiety of being responsible for something that’s worth more than your annual salary, never completely vanishes.

This experience was certainly one of the most enjoyable and spectacularly extra, I’ve had the pleasure of indulging in, in the UAE. It was above all else Fast and I’m now Furious I have to drive home in my 2.0 litre Renault Captur. Slowest. Commute. Ever.

Culture
Tech
Things to do
Transport
EDITOR’S PICKS
What’s On Nightlife Awards 2021: Here are the nominees...
READ MORE
It's back! What's On Lock In returns to Media One Hotel
READ MORE
Arts and culture: 5 spots we can't wait to visit at Expo 2020 Dubai
READ MORE
UAE petrol prices are set to decrease in September 2021
READ MORE
MOST POPULAR
Oktoberfest at Atlantis The Palm includes a themed brunch at Saffron
5 nice things to do in Dubai this week: September 19 to 22
Middle East Comic Con is coming to Abu Dhabi in March 2022
6 fun things to do in Abu Dhabi this week: September 19 to 22
Most affordable way to rent a car in the UAE? Try pay-as-you-go…
YOU SHOULD CHECK OUT
Our website uses cookies and other similar technologies to improve our site and your online experience. By continuing to use our website you consent to cookies being used. Read our privacy policy here.