The next Regional Artist Spotlight rising star is: Michele

Warning, listening to Michele’s music will likely bring tears to your eyes. It certainly did with us, and appears to be a running theme at most of her intimate concerts around the region. That’s just how Michele likes it anyway. The Dubai-based R&B meets neo soul singer creates music that she describes as ‘sultry and dreamy depression’. Probably not the kind of music you’ll want to listen to pre-brunch, but spot on if you’re feeling a bit emosh.

What’s On: How did you first get into music?

Michele: I’ve been singing since I was three years old. My parents found out I had a nice voice and put me through vocal, piano and guitar classes. My first vocal coach wanted to train my voice to sing classical music and opera… that obviously did not stick. I always thought that I would be a cover artist or just someone who could ‘sing well’. I had major stage fright, which didn’t help my performance ambitions. But as I got older, I didn’t want to live life with regret, so I pushed myself and started going to open mics. It kind of grew from there… 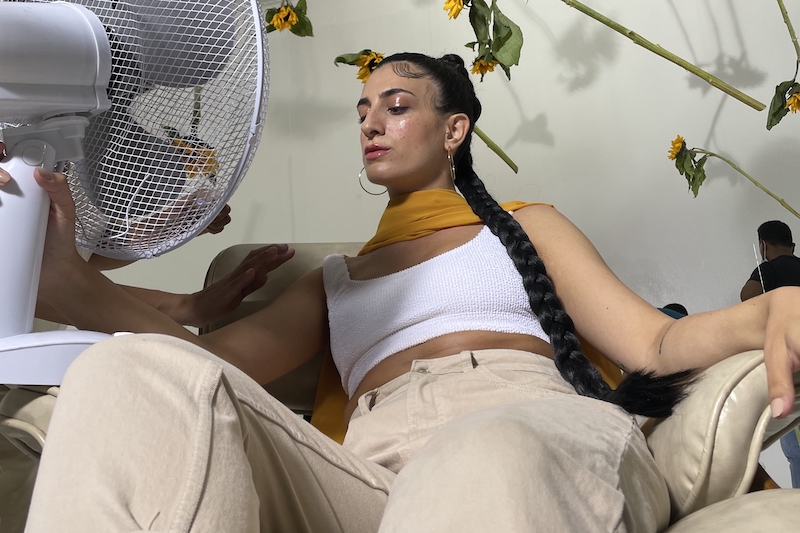 WO: How would you describe the music that you make?

M: I love to describe my music as sultry sadness. I try to squeeze the listeners’ hearts so tight they’d have to confront themselves and their feelings. I don’t think I fit into one genre but there’s a lot of influence from neo- soul, jazz, dream pop and sometimes bossa nova.

WO: Who are the artists, or people, who inspire you?

M: I look up to a lot of independent artists who are starting to make it big. I like to study them and learn from them. Artists such as Tanerelle, Alina Baraz, Galimatias, Col3trane, Joy Crookes, Rum.gold… I could go on for days. I’m also very inspired by the artists in Egypt. The music scene there is really booming, and I look up to these artists and try to learn from them.

WO: What are your latest musical accomplishments?

M: One of my latest releases All for me was added to a big Spotify playlist, which was extremely exciting. I also got played a few times on BBC’s ‘Introducing’, which was a big win. Another personal accomplishment was when someone from Australia sent me a video of her and her husband at their wedding dancing their first dance to one of my songs. That was a shock in the best of ways.

WO: What is your creative process like? Has it changed since the pandemic?

M: My process starts with a melody or a loop I get off Splice or a beat off YouTube. Once I find the right one, I start singing gibberish to it, creating a skeleton for a potential song and then depending on the song’s sound I decide which producer I want to work on the song with. The songwriting part is my least favourite part. I’m more of a melody person so the songwriting comes last. It’s definitely not easy. There’s a lot of work that goes into creating a song but working with the right people will make the process so much smoother.

WO: Where have you performed? What was your favourite venue to perform at?

M: My favourite performance so far was at a Blank Space event back in November. I was the guest artist, and it was my first performance after the pandemic. It was so memorable because it was such an intimate setting, it took place at The Theater at Mall of the Emirates, which I think is a hidden gem in Dubai. The audience was so receptive to every song. Some said they cried, during my performance of Mirage. If that’s not a compliment to my music I don’t know what is.

WO: What are your latest releases? What is the story behind them?

M: I released a small project called A field of Green back in May. It’s a three-track EP. One track is more of a monologue that connects the two songs. I had written them separately about going through the pandemic. The pandemic definitely sent me through a rollercoaster of emotions. I was able to take inspiration from what and how I was feeling to write songs for this project. Another release that came out earlier this year is All for me It’s pretty self- explanatory; it’s about being in a toxic relationship. The song was inspired by a small event in my personal life that I exaggerated in my songwriting.

WO: Which one of these releases is your favourite and why?

M: ‘All for me’ is definitely one of my favourite tracks I’ve created so far. Also Fire that I released in 2020. They’re my favourites because they’re the closest to the direction I would like my sound to move towards. I’m very excited about my next release, too. I teamed up with Jay Wud for this project and he pushed me to experiment with more sounds.

WO: What is an average day like for you?

I wake up at around 7am and like to start crossing things off my list. I work a nine-to-five so during the week my days are spent at work, and I get to the music stuff later. I do enjoy being home but I have my social butterfly moments, too.

WO: What does your involvement in the Regional Artist Spotlight mean to you?

M: I’m so honoured to be the artist of the month especially among the roster of artists that have already been featured. It definitely makes me feel like I’m doing something right. I never thought I would be where I am today so any win, big or small, I celebrate and push myself to do better and do more every time. I am very grateful for being a part of the Regional Artist Spotlight platform and I only hope that through it my music will reach more people and more hearts.

WO: What is your top four after-party playlist?

M: I have a playlist of 600 favourite songs to choose from, but these are the ones that made the cut: Concrete by Teyana Taylor; Let Go by Galimatias; Baby Powder by Jenevieve; Mama Saturn by Tanerelle.

Culture
Things to do
EDITOR’S PICKS
What’s On Nightlife Awards 2021: Here are the nominees...
READ MORE
It's back! What's On Lock In returns to Media One Hotel
READ MORE
Arts and culture: 5 spots we can't wait to visit at Expo 2020 Dubai
READ MORE
UAE petrol prices are set to decrease in September 2021
READ MORE
MOST POPULAR
Oktoberfest comes to Atlantis The Palm including a themed Saffron brunch
5 nice things to do in Dubai this week: September 19 to 22
Middle East Comic Con is coming to Abu Dhabi in March 2022
6 fun things to do in Abu Dhabi this week: September 19 to 22
Most affordable way to rent a car in the UAE? Try pay-as-you-go…
YOU SHOULD CHECK OUT
Our website uses cookies and other similar technologies to improve our site and your online experience. By continuing to use our website you consent to cookies being used. Read our privacy policy here.