The hole was discovered in a local area code…

Immediately reminiscent of the Great Blue Hole in Belize, this slightly smaller sea-framed sapphire popped up on the Environment Agency – Abu Dhabi’s (EAD) radar during routine surveys, and has been given the name, Al Dhafra Blue Hole.

At 12 metres in depth, its a drop in the ocean (sorry) compared to its Latin American counterpart (125m deep), but it’s no mere blip — it’s 300 meters long and 200 metres wide and filled with a rich abundance of colourful marine life (including grouper, sweetlips, emperor fish and jackfish and at least 10 different coral species).

Marine features like these attract diving enthusiasts from around the world — the call of the void, swirling azure blues and kaleidoscopic collection of fish make them an irresistible pin in the map for the intrepid members of the scuba squad.

We’ve already name-dropped what is probably the most famous blue hole, in Belize — but the deepest discovered so far is The Yongle (which eerily sounds like it could also be the name of the creature living at the bottom of it) — in the South China Sea. It’s 300 metres deep, which means it could swallow the whole Address Downtown in one go. “Yum”, Yongle says, “more”.

How do blue holes form? 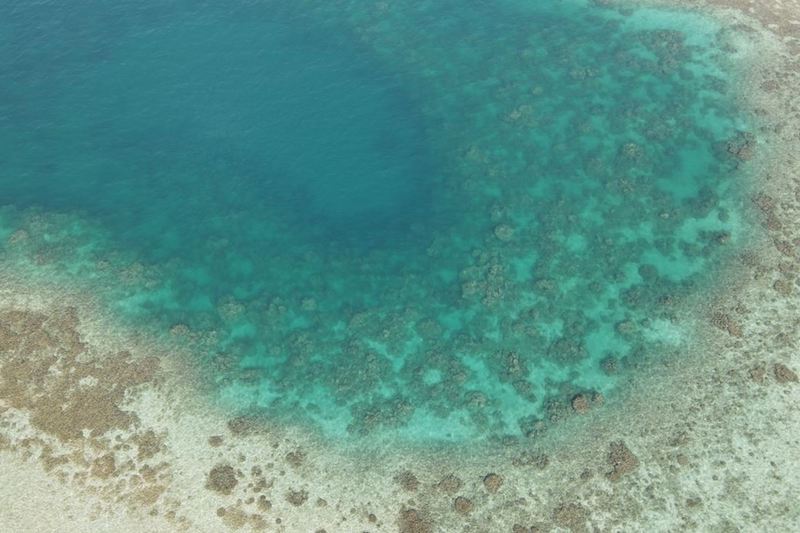 The short answer is ‘erosion’ — blue holes are vertical caverns or sinkholes, usually in relatively shallow water with a bedrock of limestone or coral. Many of the larger ones were believed to be formed during previous ice age, when the sea levels were lower, and the limestone was exposed to the same weather-based erosion that forms caves on land. Was this how the Al Dhafra Blue Hole was formed? Unsure, but it’s entirely possible.

News
Travel
EDITOR’S PICKS
Here's the full list of UAE public holidays in 2023
READ MORE
23 incredible things to look forward to in the UAE in 2023
READ MORE
Hidden gems: 10 UAE desert pop-ups to discover this winter
READ MORE
Where to travel in 2023: 10 new flight routes from the UAE
READ MORE
MOST POPULAR
Dubai tourism increases by a massive 97 per cent
16 incredible mega projects coming to Abu Dhabi soon
The epic Asian Le Mans Series returns to Dubai Autodrome this month
Snapped: Celebrities spotted in the UAE this week
With its unique decor, Dubai's La Nina restaurant evokes tales of distant travels
YOU SHOULD CHECK OUT
Our website uses cookies and other similar technologies to improve our site and your online experience. By continuing to use our website you consent to cookies being used. Read our privacy policy here.