Staycations
Things to do
Travel

A staycation sprinkled with more than a little movie magic…

The world’s first Warner Bros. Hotel is now open on Yas Island — located a mere cape-twirl away from the spandex-clad wonderland of Warner Bros. World Abu Dhabi. But it’s more than a launchpad for Yas Theme Park adventures, the hotel comes with an exciting collection of new restaurants and recreational facilities; it plays curator to a museum-load of props and exhibits from Warner Bros.’ vast entertainment dynasty; and with a generous schedule of character visits, it offers kids the opportunity to come face-to-face with costumed heroes 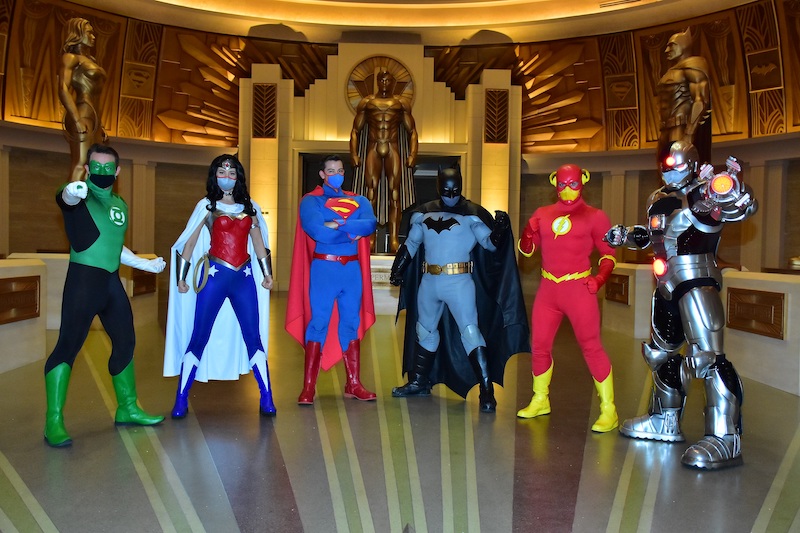 If your staycation priority list leans more heavily on thrill than it does on chill, you’ll struggle to find a better place to temporarily lay your hat, than on Yas Island. And this WB Hotel (full name The WB Abu Dhabi, Curio Collection by Hilton), is right in the heart of it — minutes away from a trio of theme parks (Warner Bros. World, Ferrari World and Yas Waterworld); Yas Mall and adventure hub, Clymb are just down the road; the stunning collection of new eateries at the Yas Bay Waterfront development are conveniently adjacent; and quite unexpectedly — the hotel’s rooftop bar, The Overlook — offers absolutely stunning sunset views across Yas Links Golf Course, and a green arm of mangrove forest stretching towards the city skyline.

The look and feel 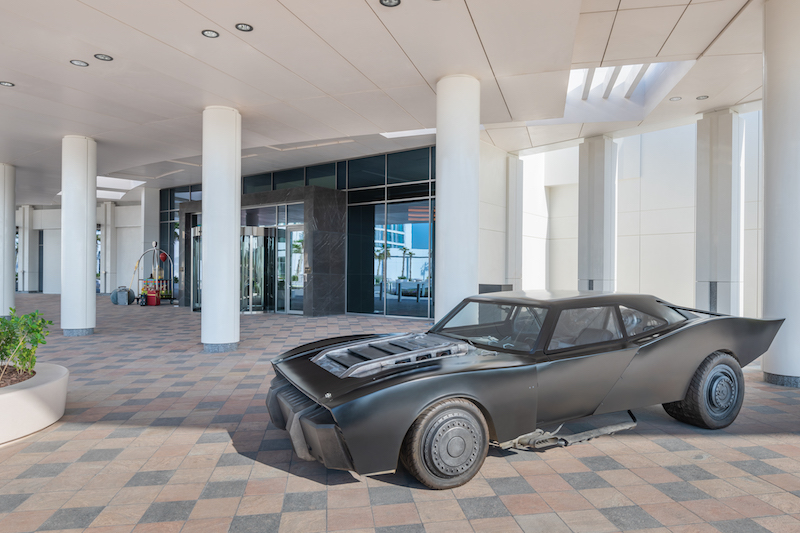 Even before you make it into the lobby, you’re greeted by some pretty august nuggets of reconstructed WB memorabilia. You’ll find the iconic sofa from the opening montage of cult sitcom Friends, Battison’s Batmobile and a collection of luggage from select celluloid-spun characters. Inside there’s a virtual marble mural depicting etched scenes from stream and screen; a spiraling staircase puckering with movie props and celebrity paraphernalia; and an autoplay WestWorld piano bashing out tinny renditions of 90s garage grunge. What’s here is well thought out, the degree of detail and its presentation is extravagant, and there’s plenty to kindle both kid and adult attention. But with a heritage offering so much to draw from (Harry Potter, Sopranos, Mad Max, the Lord of the Rings, the entirety of the DCEU, Tom and Jerry, Buggs and Daffy and Friends to name a few), it feels like there’s space for growth, and we do hope this aspect of the magic does expand. 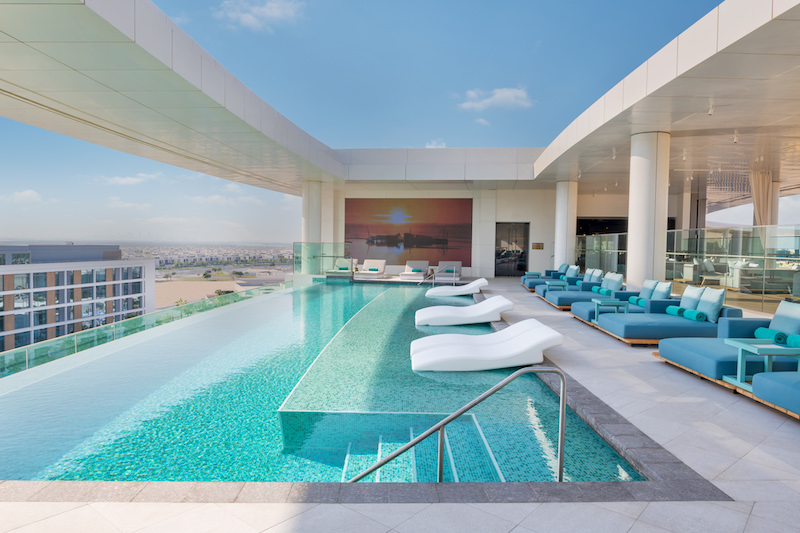 With the frankly sugar-dizzying array of attractions in the point-blank vicinity, there isn’t a huge amount of pressure on the hotel to supply a big range of amenities. But there are actually some absolute crackers on-site, chief amongst them being the pool complexes. The ground level aqua-frolics include a ‘dive-in’ in-pool cinema screen (which was frustratingly stuck cycling the highlight reel of Quacker’s appearances in Tom and Jerry during our stay for some reason) and a swim-up bar. The rooftop infinity pool offers absolutely mesmerising sundowner views. and there’s a well-stocked fitness centre, kids’ club and splash pad. 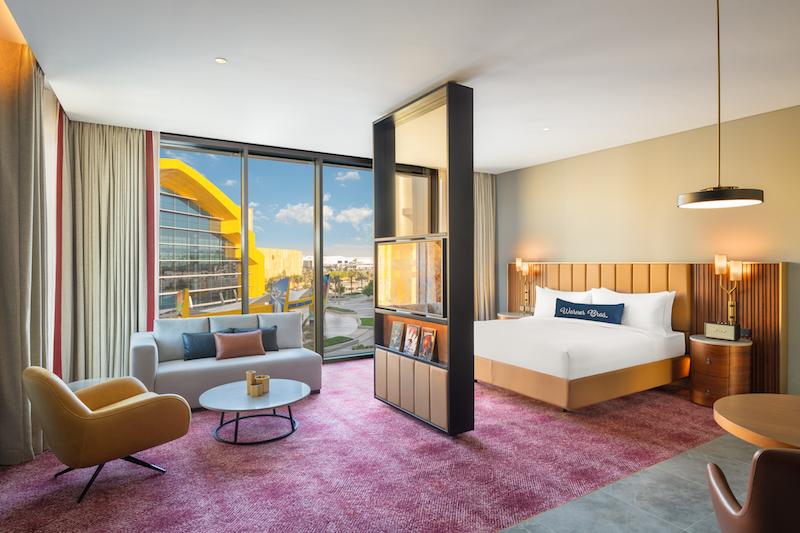 These aren’t the most luxurious rooms, this isn’t a deluxe class hotels, but they’re neat, well-appointed and the entertainment themes are continued with gusto. Each of the 257 keys offering artwork and design finishes fitting in with three separate themes. “From Script to Screen” offers BTS and origin story insights for a range of Warner Bros projects, illuminating the journey from written page to the final shot. “Artist Confidential” showcases a collection of some of Warner Bros. most dazzling talent from both sides of the camera. And “The Vault” theme offers exclusive access to rare images from Warner Bros.’ voluminous archives.

The food and drinks 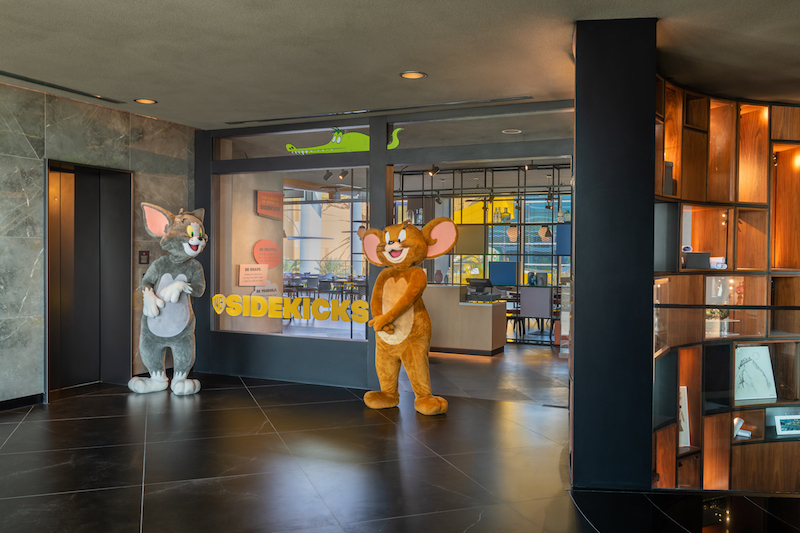 There are actually five restaurants on the premises, but we’d like to draw special attention to three. As we’ve already mentioned, With a watery perch to ponder the horizon, The Overlook provides some genuinely jaw-dropping moments. The Directors’ Club operates primarily as a steakhouse, and for a theme hotel restaurant really has no business being as good as it is – the prime cut ‘steak flight’ trio is one of our favourite meaty discoveries so far in 2022. Sidekicks is the all day diner and it’s chief menu offering, is character encounters. These are the sorts of experiences — particularly for the younger sets of guests, the ones still capable of suspending disbelief that there’s a man beneath the costume —that are the fuel of forever memories.

Based on a room night for two adults and a child, with breakfast — you can get standard semi-flex packages from around Dhs1,000. This price also includes access to one Yas Theme Park for all guests, every night of the stay.

Staycations
Things to do
Travel
EDITOR’S PICKS
Here's the full list of UAE public holidays in 2023
READ MORE
23 incredible things to look forward to in the UAE in 2023
READ MORE
Hidden gems: 10 UAE desert pop-ups to discover this winter
READ MORE
Where to travel in 2023: 10 new flight routes from the UAE
READ MORE
MOST POPULAR
Nobu Hospitality to open luxury resort in Ras Al Khaimah
How to become the best version of yourself in 2023
106 amazing new restaurants coming to Abu Dhabi very soon
Rafting and surfing adventures are now back at this Abu Dhabi park
UAE fuel prices are rising in February
YOU SHOULD CHECK OUT
Our website uses cookies and other similar technologies to improve our site and your online experience. By continuing to use our website you consent to cookies being used. Read our privacy policy here.