Best of
Eat & Drink
Restaurants
Reviews
Things to do

Square pizzas seem to be having a bit of a moment in Abu Dhabi right now, and why not? There are far more dangerous ideas circulating in the world of fire-baked carbs. We won’t name names, but *coughs* pineapple *coughs again* you know who you are.

This particular geometry-bothering pizza joint, Emmy Squared — is a popular US import that does an award-winning side hustle in burgers and street bites. And this Abu Dhabi location, found along the boardwalk of the Yas Bay Waterfront, marks an exciting first step for the brand, outside North America. 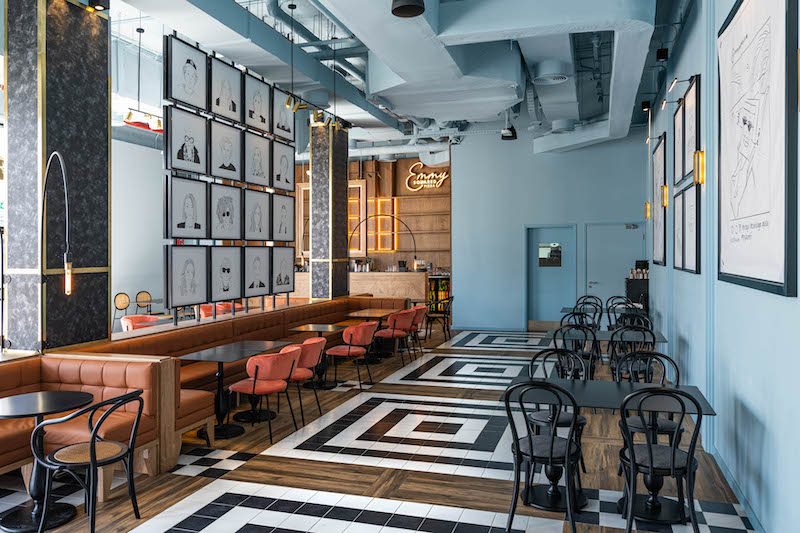 It’s a relatively tame space compared with some of the other Bay inhabitants. It’s stylish, make no mistake, there’s just less overt peacocking performed by the decor. Inside the hazy-sky-blue walls are occasionally interrupted by wood pannel, a part-open kitchen and blocks of monochrome from framed illustrations.

Today we’re ordering our twist on the ‘Joey Special’, a pizza and a burger. And some side bites of ‘chicken crunchers’ because, much like the shape of their pizzas, the wheels are already off.

It’s midweek and during the day so it’s not a particularly peak-bustle moment here at Emmy, but we’re still impressed by the speed at which the food arrives. We’re starting with the chicken crunchers (Dhs49) — crispy nuggets of chicken fillet, marinated with sriracha and coriander, served with a ranch dipping sauce. They’re tender, juicy, as-crunchy-as-as-advertised and despite the best efforts of hipsters to oversaturate the world with sriracha, we’re still not yet bored of that punchy Asian hot sauce.

Our burger, Le Big Matt (Dhs65) is served to the table with an elevated tray sitting above it to stage the pizza. We’ve never been able to resist an invitation ‘to pizza,’ so we start there. We’re eating The Emmy (Dhs57), one of the white sauce-based pizzas and it comes topped with banana peppers, ranch sauce stripes and red onion. 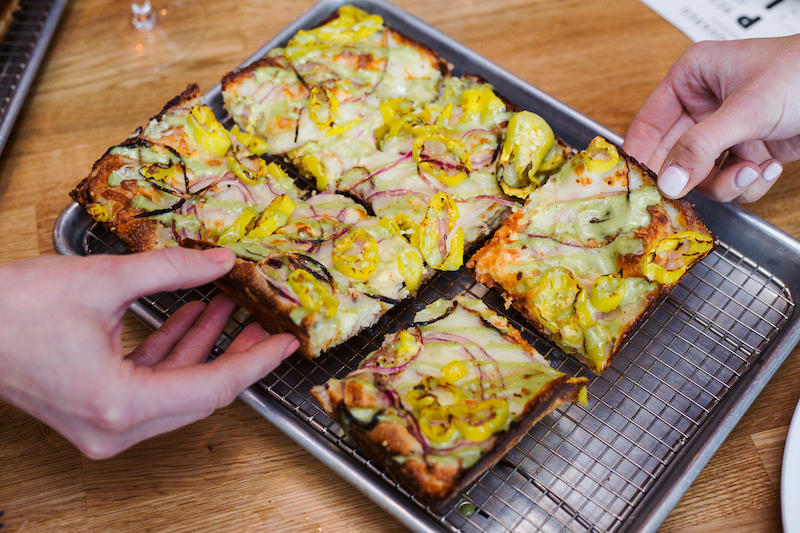 This is unmistakably American engineering. Underneath, the dough base is pure Detroit muscle, made with organic flour — it’s deep and buttery, offering a tailored crisp to the undercarriage and edges. But the toppings, they’re pure New York sass. We’ve opted for a relatively humble ensemble but it sings from each of the four sides of the square. There’s warmth in the peppers, tang in the onion, and synaptic swells from the rich and creamy sauce.

All the pizzas here are served with a pomodoro-based dipping sauce, a considerate inclusion that helps add a bit more depth to those last topping-free mouthfuls. And there are more wild creations if you’re partial, possible topping combos include pepperoni and honey, and Russian-beverage-based sauce with parsley pesto.

We’re slightly less awed by the burger, a food group that faces much fiercer competition in Abu Dhabi. It’s framed with a pretzel bun, which is more of a novelty than a revelation. The beef patty is neat, thick and meaty, and the ‘Sammy sauce’ gives each bite a strong backbone, but in our opinion, there are better burgers elsewhere in Abu Dhabi.

Verdict: If you’re craving an American style pizza, Emmy Squared is leagues ahead of the usual suspects. They might not have reinvented the wheel, but they’ve certainly convinced us to be there, and eat square.

Best of
Eat & Drink
Restaurants
Reviews
Things to do
EDITOR’S PICKS
Here's the full list of UAE public holidays in 2023
READ MORE
23 incredible things to look forward to in the UAE in 2023
READ MORE
Hidden gems: 10 UAE desert pop-ups to discover this winter
READ MORE
Where to travel in 2023: 10 new flight routes from the UAE
READ MORE
MOST POPULAR
Nobu Hospitality to open luxury resort in Ras Al Khaimah
How to become the best version of yourself in 2023
106 amazing new restaurants coming to Abu Dhabi very soon
Rafting and surfing adventures are now back at this Abu Dhabi park
UAE fuel prices are rising in February
YOU SHOULD CHECK OUT
Our website uses cookies and other similar technologies to improve our site and your online experience. By continuing to use our website you consent to cookies being used. Read our privacy policy here.