A revelation – and education – at this omakase hidden gem…

Dubai restaurants talk a lot about ‘culinary journeys’ but that really is the only way to describe what you’ll experience at Moonrise. The unlicensed hidden gem is found on the rooftop of hip residential building, Eden House, near Satwa. It’s not an easy find, mind. Google Maps doesn’t quite bring you to the front door, so follow the directions given to you with your booking confirmation.

Leading the show is Chef Solemann Haddad – a young, self-taught chef who was born and raised in Dubai. While his CV might be limited, his passion is boundless. Every night, he hosts a handful of guests for two seatings, serving up an ever-changing seasonal menu that painstakingly utilises the finest Asian and Middle Eastern ingredients to prepare his nightly meals.

The eight-course menu (which changes dish by dish to create a new menu every three months) is kept under wraps until we arrive. We take a seat at the bar, overlooking the culinary team as they meticulously prepare each element. We’re given a brief yet passionate explanation on each dish and given the go-ahead when to tuck in. 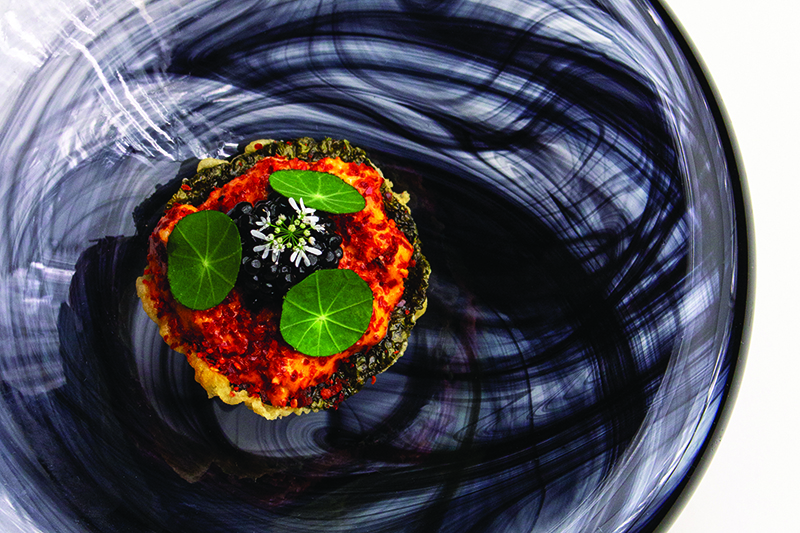 The first dish blew us away. We’re still trying to work out how such a small bite can pack in so much flavour. One of Moonrise’s signatures, the puri filled with foie gras, dates, saffron and pineapple chutney and aged Sichuan chilli oil was layered in such a way that the flavours hit one wave after the other. Sweetness from the chutney gave way to a rich and nutty foie gras before ending in a hot kick of chilli oil.

Plates grew in size as the meal continued, concluding with two generous portions of dessert, for which guests owe thanks to Chef Solemann’s “violent sweet tooth”. The ‘breakfast cereal’ was a nostalgic mix of caramelised white chocolate sorbet and caramelised milk crumble topped with olive oil powder. The intense sweetness balanced with the crunchy crumble pieces offered a comforting, yet wildly indulgent bowl. 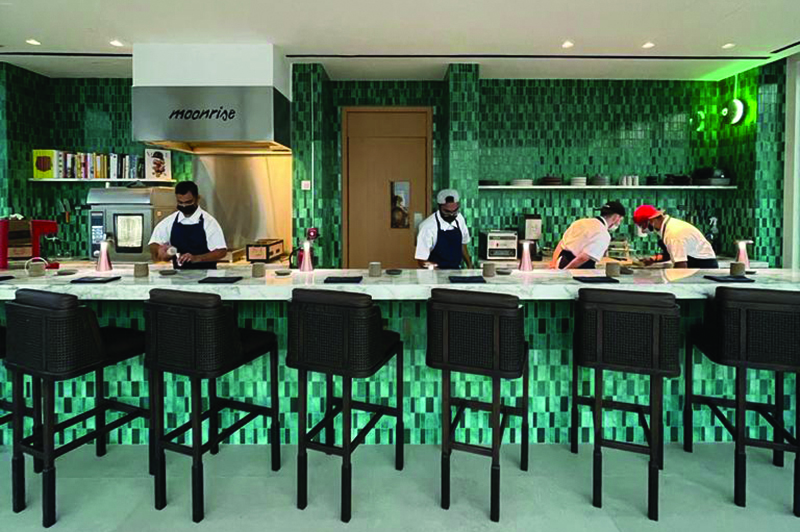 The nature of this concept allows for minimal waste, as the kitchen prepares only what it needs for the number of people that booked. But you won’t go home hungry. On the contrary, we were forced to subtly unbutton our jeans after shamelessly polishing off every last bite of the meal.

Moonrise is an exciting addition to Dubai’s restaurant scene for so many reasons. After firmly winning over the city’s local foodie crowd, the team of talented, passionate chefs are now ready to take on the mainstream. Word of mouth has spread to the point that the restaurant tends to get booked out a week in advance, which is hardly surprising since we’re already looking forward to our next visit.

Bookings are made in advance online, and each seat is priced at Dhs475 including mocktails.

Eat & Drink
Reviews
EDITOR’S PICKS
Here's the full list of UAE public holidays in 2023
READ MORE
23 incredible things to look forward to in the UAE in 2023
READ MORE
Hidden gems: 10 UAE desert pop-ups to discover this winter
READ MORE
Where to travel in 2023: 10 new flight routes from the UAE
READ MORE
MOST POPULAR
The best new breakfast spots to try in Dubai
Inject some culture into February with 14 cool exhibitions in Dubai
Plans unveiled for a scenic new 93km cycle highway in Dubai
A free full moon beach party is happening in Dubai this weekend
42 parks with outdoor barbecue facilities in Abu Dhabi
YOU SHOULD CHECK OUT
Our website uses cookies and other similar technologies to improve our site and your online experience. By continuing to use our website you consent to cookies being used. Read our privacy policy here.