Published by Motivate Media Group, the book was first launched in Arabic. The English version has just been released at Abu Dhabi International Book Fair 2022 on May 28. The book is written by Raed Barqawi – one of the most respected journalists in the region and Executive Editor-in-Chief of Al Khaleej newspaper – the first daily Arabic newspaper in the UAE.

What is the book about? 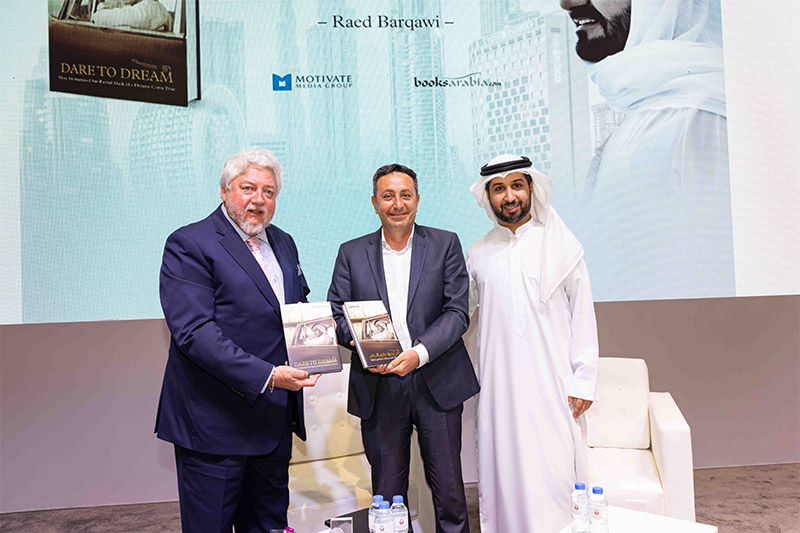 The book explores how, under the visionary leadership of Sheikh Mohammed, Dubai has become a leading global hub for talent and a place where the Arab youth can find the resources and opportunities to fulfil their dreams. And Barqawi has enjoyed a front-row seat over the past three decades to see these dreams turn into reality.

Barqawi was able to track the rise of Dubai and its several megaprojects over the decades and his fortuitous proximity to Sheikh Mohammed afforded him the privilege of asking Sheikh Mohammed the rationale behind some of the historic decisions that led to Dubai’s meteoric growth.

Some of the stories you will read about include some of Sheikh Mohammed’s most crucial decision-making including his decision to sign a massive 15-billion-dollar deal to purchase fifty-eight aircraft for Emirates just days after the September 11, 2001 attacks brought the aviation industry to its knees, or why he announced the construction of a golf course on the Dubai Creek at the end of 1990 when the drums of war were beating in the region, among other critical decisions.

The book will also take you back to Sheikh Mohammed’s childhood and youth and the events that shaped his personality.

Barqawi said, ‘I have tried to address two key questions in my book. One, just how did Sheikh Mohammed do the impossible and turn Dubai into a unique global role model? And two, how did His Highness manage to empower a culture of dreaming in the Arab world, a world that had stopped dreaming decades ago?’

Ian Fairservice, Managing Partner and Group Editor-in-Chief of Motivate Media Group commented, ‘Raed talks about the wisdom and foresight of His Highness Sheikh Mohammed bin Rashid and, through his writing, showcases a realistic history of this country. Raed is one of the most distinguished voices in journalism and readers will be enthralled by the incredible anecdotes he has chosen to illustrate the success story that is the UAE.’

You can purchase the English or Arabic edition on booksarabia.com for Dhs95. All royalties from the book’s sales will be donated to Al Noor Training Centre for Persons with Disabilities.

Books
Culture
EDITOR’S PICKS
Here's the full list of UAE public holidays in 2023
READ MORE
23 incredible things to look forward to in the UAE in 2023
READ MORE
Hidden gems: 10 UAE desert pop-ups to discover this winter
READ MORE
Where to travel in 2023: 10 new flight routes from the UAE
READ MORE
MOST POPULAR
Pics of the week: Your best photos of the UAE
Dhow & Anchor has got you covered every day of the week
RTA: All the road closures you need to be aware about
Review: The Nice Guy Dubai
Masha and the Bear is coming to Abu Dhabi this April
YOU SHOULD CHECK OUT
Our website uses cookies and other similar technologies to improve our site and your online experience. By continuing to use our website you consent to cookies being used. Read our privacy policy here.