What's On speaks to the stars of the new Elvis movie

After debuting at Cannes with a reported 12-minute standing ovation, it’s safe to say our anticipatory thirst for this biopic on the King of Rock and Roll — is now a little less conversational, a little more active. It’s the creation story of a man that was likely the first truly global megastar, his ascension, a BTS look at a hype phenomenon never witnessed before or since, all told through the eyes, of one of contemporary cinema’s most gloriously theatrical storytellers, Baz Luhrmann.

We had the extraordinary privilege of speaking to Baz and the two leads in the roles of Elvis and Priscilla (Austin Butler and Olivia DeJonge), and like a river flows, surely to the sea — some things are meant to be… we couldn’t help falling in love with this project.

What’s On: It’s clear from the trailer that this film deals with some pretty big cultural themes, what lessons can be learned from the Elvis story?

Baz Luhrmann: If you look at the 50s, 60s and 70s — you can’t tell that history of America without talking about race. Because what I think has made America great, has also been at the centre of its most controversial, difficult and painful combustion. You cannot tell the Elvis Presley story without talking about race, no issue of race in America, no Elvis. Because he grows up in this environment, Elvis is growing up in this black neighbourhood with black friends and ends up comfortable with life on Beale Street [in Memphis, Tennessee], and he also loves country music.

He goes from the age of 20, being a truck driver to the most famous man on the planet, and right at that moment, desegregation is happening in the south and the powers that be want to stop it, but Elvis is jumping the race line. And at the same time, young teenagers have just been invented, post-war, the young for the time have money, they can buy records… they can have a transistor radio — they’re a market and Colonel [Tom Parker] knows that and the South is saying “you gotta stop that kid [Elvis] from doing that” [crossing the race line]. So when Elvis comes back from the army, gets his haircut and goes into the movies, that was the Colonel’s ploy, Elvis wanted to be a serious actor, but the Colonel makes him family-friendly.

He eventually fights back does the comeback special, and reconnects with the thing Elvis Presley loved most. You can talk all you like about country and western music and rock and roll but the thing he really was, irrefutable, he was a spiritual guy, because his greatest love to the end of his life, was singing gospel. So this movie is not so much about a lesson, it’s not didactic — but I guarantee you, that any audience member that goes to see this story will have a reflection and debate and engagement with those subjects and for me that makes it worthwhile. 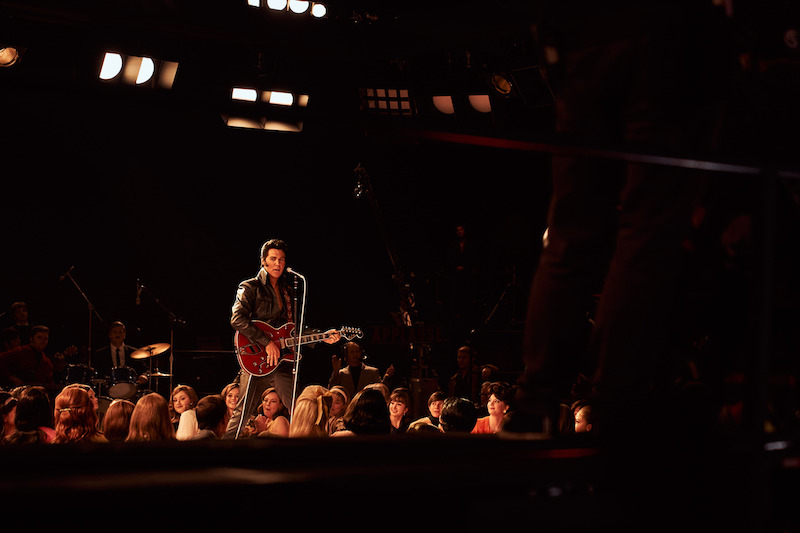 What’s On: The film tracks Elvis’ life over quite a healthy period of time, with the character going through some big physical and psychological changes, what was your favourite Elvis era to play, and for the music?

Austin Butler:  I don’t think I can list just one, but some of them that stick out in my mind, the visceral animalistic nature of the 50s for example. There’s this one performance that we do in Russwood [Park, Tennesse], that almost feels like the birth of punk rock and it’s a version of Elvis we don’t get to see on video much. You see images of it, hear stories of him rolling around on the stage, and it’s like watching a wild animal, so that was a really fun one – just because it had that fire in it. But equally I could point to ’68 in the black leather which was an incredibly fun thing to get to explore. And then later on, this portion has now become one of my favourites parts of his life – the 70s, with the big orchestra behind him, it was so incredible — powerful. Him singing Polk Salad Annie Up on stage in 1970, is one of the greatest live performances, I think, ever. I want people to see that because that’s really an exciting time in his life.

What’s On: After doing extensive research on your character, what do you think the public perception gets wrong about Priscilla?

Olivia DeJonge: I think back then, when social media wasn’t around, the perception of her came through images that were somewhat curated — when you’re the wife of the most famous person in the world, I think you’re put into a box of beauty. And Just that. But what was exciting for me, was learning more about this fire and grit that she had. And, one of my favourite things that I learned about her was that there was a crazy fan that was waiting outside and she went out and ready to fight with this woman and that to me really flipped a switch on this angelic being that we’d solidified her as. In general, that’s what we miss about women in history, they’re multi-faceted and unapologetic and she’s feisty and I really like that about her.

WO: What aspects of Elvis, good and bad, do you think Priscilla nurtured?

OD: I think that she nurtured his true soulful love of music. I think in the creative industry, it’s very easy to get wrapped up in woohoo, the big bonanza of it all, the fluff and I think she really brought him home in a sense, I think especially in the early days she was a home for him — and that she really nurtured his groundedness, she brought him back down to earth a little bit.

Culture
Film
Things to do
EDITOR’S PICKS
Here's the full list of UAE public holidays in 2023
READ MORE
23 incredible things to look forward to in the UAE in 2023
READ MORE
Hidden gems: 10 UAE desert pop-ups to discover this winter
READ MORE
Where to travel in 2023: 10 new flight routes from the UAE
READ MORE
MOST POPULAR
Pics of the week: Your best photos of the UAE
Dhow & Anchor has got you covered every day of the week
RTA: All the road closures you need to be aware about
Review: The Nice Guy Dubai
Masha and the Bear is coming to Abu Dhabi this April
YOU SHOULD CHECK OUT
Our website uses cookies and other similar technologies to improve our site and your online experience. By continuing to use our website you consent to cookies being used. Read our privacy policy here.