Things to do
Travel

A new top (Möven)pick for RAK …

Ras Al Khaimah’s Al Marjan Island was already pretty well stocked for fancy family friendly hotels, but if there’s one thing we’ve learned from life in the UAE, it’s that there is no such thing as ‘too much fancy’. Which means we still get excited when RAK drops a new line of staycation swag on the market — hotels such as Mövenpick Resort Al Marjan Island, which opened its huge glass-fronted doors in June of this year.

The website promises a five-star resort with premium dining outlets (including a new outpost for Palm Jumeirah’s Ula), a floating waterpark and a blend of leisure alchemy to satisfy both the ‘adults only’ and the ‘with kids’ camps. But, as part of our tireless campaign to test out fancy stuff purely and specifically for your benefit (sure), we booked ourselves a room for one night to test out these wild claims. 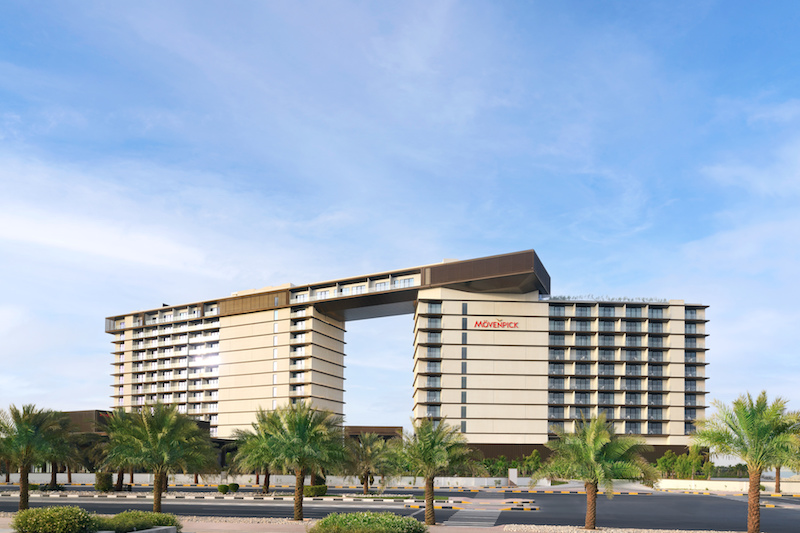 The grounds of Mövenpick Resort Al Marjan Island unravel along a 300m stretch of beachy peninsula. Its geographical neighbour is the Rixos Bab Al Bahr, but the two properties are light years apart in terms of offering. You can get full board rates here, but all inclusive just really doesn’t align with the vibe. All of the rooms have some sort of sea vista. And, we could be imagining it, maybe it’s the (not visible from our lounger) emirate’s rocky crop of mountains — but Ras Al Khaimah just often feels a little cooler, and a little less humid than Dubai.

The look and feel 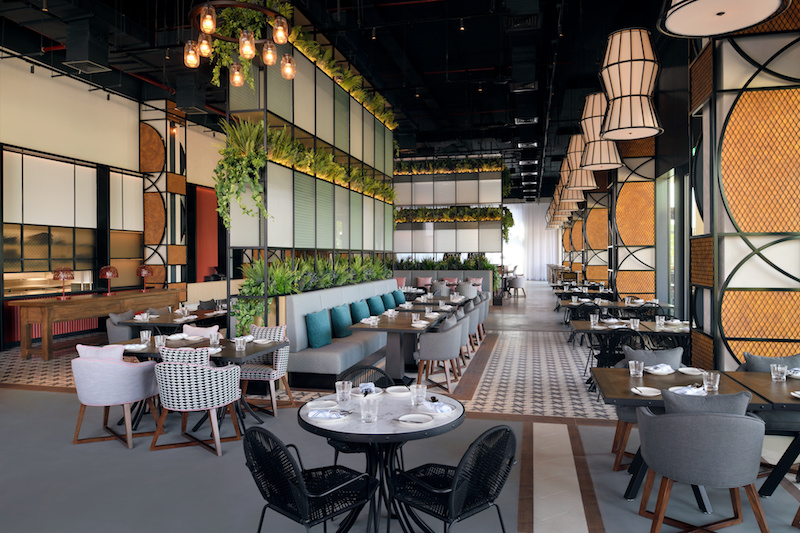 Right from the grand entrance hallway that curves into the lobby area, the hotel sets out its stock in modern minimalism, handsomely. Anywhere that’s structurally capable of swapping out walls for panoramic glass windows on the exterior has been given the transparent treatment, flooding the communal areas with a warm, natural glow. The architecture is full of geometric trickery that you can only fully appreciate from certain angles, and the sky bridge-style top floor gives the building immediate character. It is a Mövenpick in spirit, yet still unlike one we’ve seen before — and Ula’s Baleirac ‘swings, wood and macrame’ finishes are a refreshing, stripped back gear change for bohemian-leaning sun seekers. 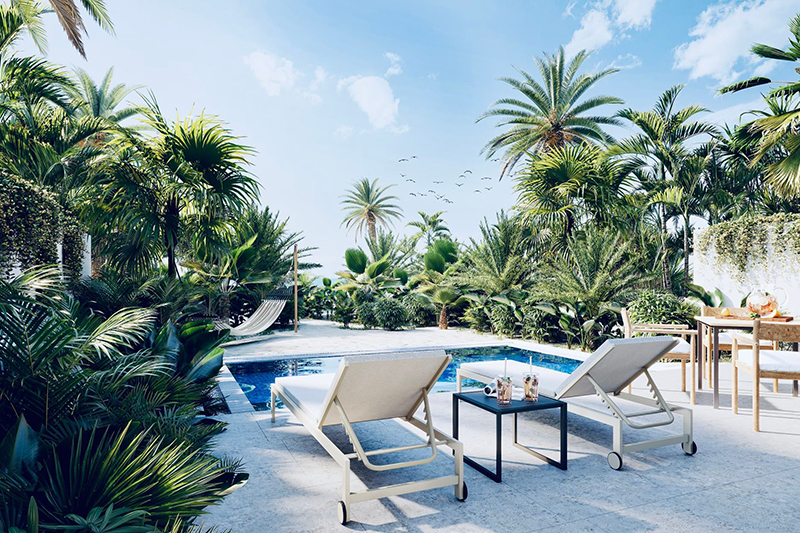 There are 418 rooms in the property, we stayed in a Panoramic Bridge Junior Suite — comfortably giving our posse of two adults and two little ones enough space to sleep, snack and bounce to a holiday playlist. The rooms are full of neat little detail touches too — super soft slippers, cute kitten-themed dressing gowns for the kids, and as mentioned above, all of the rooms have some sort of view of the Gulf blues, along with either a terrace or balcony to enjoy it from. If you’re a larger group it makes sense to look at the beachfront suites, smart duplexes with private pools that can be combined into villas for the ultimate in bougie island stays. 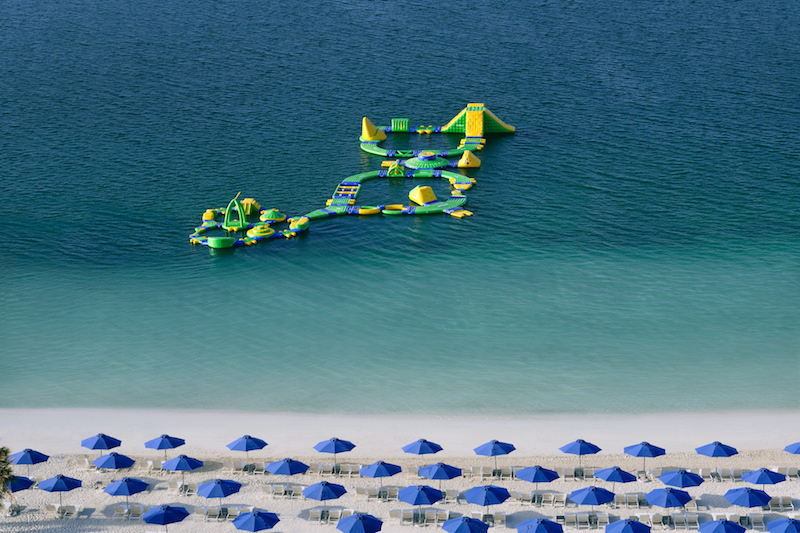 In addition to all the things you’d expect from a resort of this class — a big gym, infinity pool, private beach, spa and a wild collection of watersports, it also has some massive deal sweetening extras. Take the floating waterpark for example, essentially an inflatable ninja warrior assault course that sends fairly regular invitations for you to take an unsolicited dip. And then there are all the family focused amenities, the children’s pool, outdoor play zone and the Starfish Adventure kid’s club which has the best-of-staff and a best-in-class itinerary of fun and educational activities that include things like crystal making, craft sessions and controller bashing on the PS5.

The food and drinks 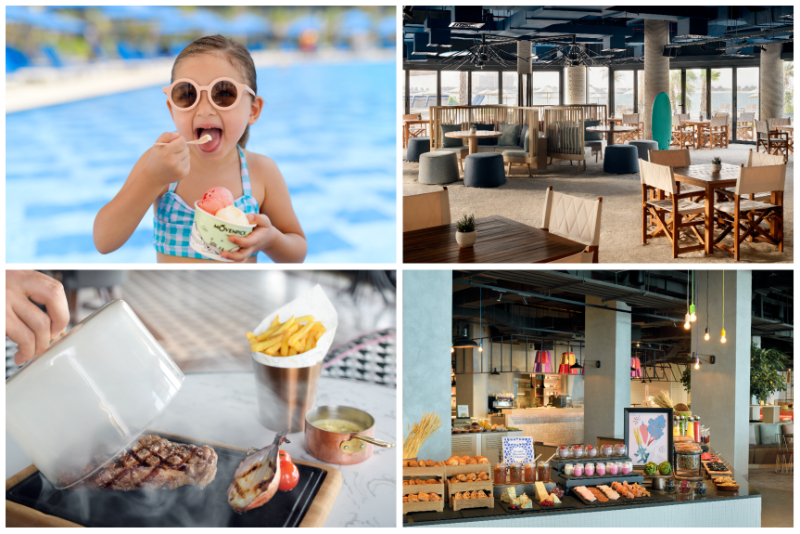 There’s an indoor climate controlled poolside restaurant called the Beach House, with a Cali-Mex menu and a Maldivian sand between the toes floor. Perfect for distracting kids whilst you tackle the homemade veg chip nachos. Boons is a European brasserie trading in live entertainment, human head-sized steaks and a continental feel to the kitchen wizardry. We’ve already gushed (and produced a video) on our very pleasant thoughts about Ula. And then there’s Market Kitchen, the jazzy all-day diner which puts on a brunch-sized spread, three times every day. There’s a daily ‘Chocolate Hour’ in the Möca Lounge, where you can load up on gooey platefuls of the good stuff for free. And in September Neo Sky Bar is due to open — it will be Marjan Island’s first and only rooftop lounge offering privileged veiws of the cosmos’ finest light shows. 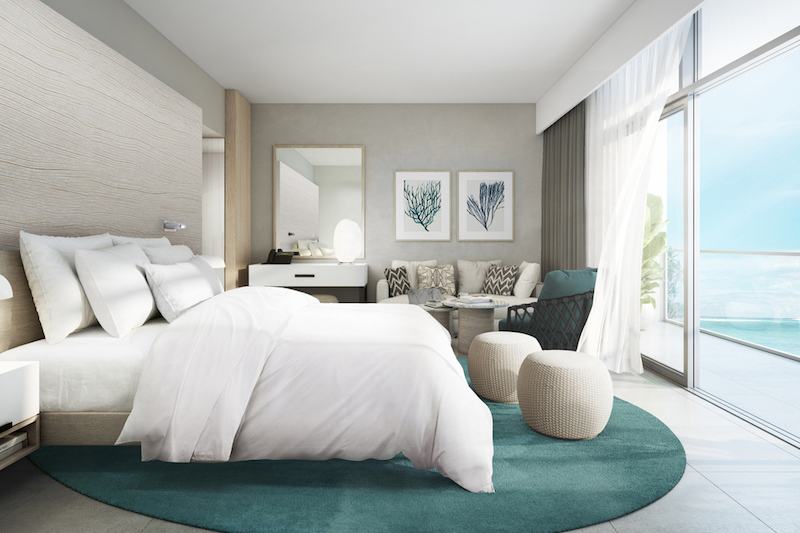 A true new legend of the RAK leisure market.

Things to do
Travel
EDITOR’S PICKS
Here's the full list of UAE public holidays in 2023
READ MORE
23 incredible things to look forward to in the UAE in 2023
READ MORE
Hidden gems: 10 UAE desert pop-ups to discover this winter
READ MORE
Where to travel in 2023: 10 new flight routes from the UAE
READ MORE
MOST POPULAR
With its unique decor, Dubai's La Nina restaurant evokes tales of distant travels
Reservations are now open for French restaurant Fouquet's Dubai
The colourful Sharjah Light Festival returns next week
Relive those cosy winter moments at Chalet 105 at Twiggy
There are some big road closures in Abu Dhabi this weekend
YOU SHOULD CHECK OUT
Our website uses cookies and other similar technologies to improve our site and your online experience. By continuing to use our website you consent to cookies being used. Read our privacy policy here.