Nothing but island vibes…

Considering its culinary clout, Caribbean cuisine is probably one of the least well represented regions of world gastronomy in the UAE.

Things have been changing. Slowly. In the last few years Abu Dhabi has been the beneficiary of several new restaurants, all passionate about serving up Calypso spirit food. One of those new venues, is Ting Irie Pon Di Beach, a Saadiyat shoreline sister offshoot of Dubai’s now legendary Jamaican lounge found in Souk Al Manzil.

The menu at both locations promises authentic Kingstonian bites, large and small, but with price tags those used to eating Caribbean food elsewhere (including at the source) might find a little buccaneering. We’ve been told it’s better to think of the cuisine here, more as fine dining than say, traditional street food. 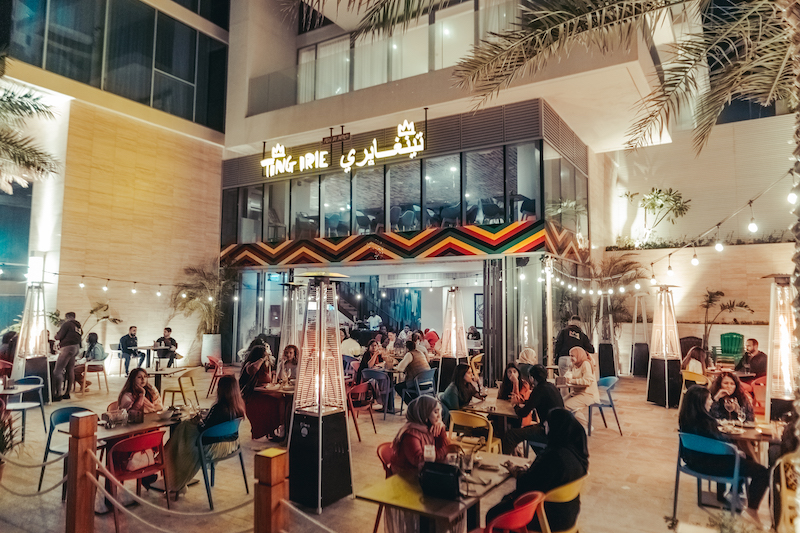 And that sounds like a claim that’s worth investigating, which is why, right now, we’re sat at a window seat on the first floor of Ting Irie Pon Di Beach looking out across the corduroy lines of linen sand, and cornflour surf. On the speakers, the beat bounces from 90s R&B bangers to reggae, some Nas, and a little dancehall. There’s a wild, seductive energy here, in spite of the fact the venue’s most alluringly prominent feature (its gorgeous beachview terrace) is currently, effectively rendered off limits (because UAE summer). 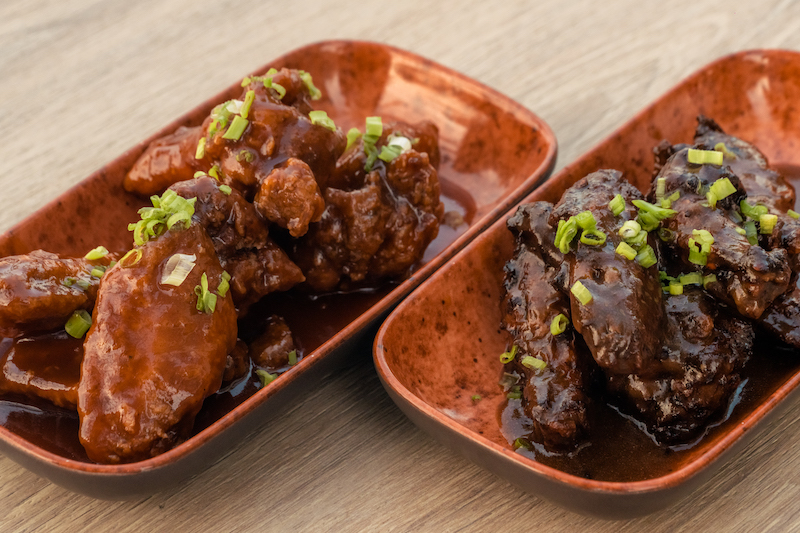 Our waitress prescribes us a refreshing sorrel mule mocktail (Dhs30), it’s floral and spicy, a fair fit for our mood. She also directs our starter order, and informs us that “as today is Friday” …  “there’s a sun down special available all day” which means half price (or near enough) on a wide selection of food and drink.

We’ve got Jamaican beef patties, an oxtail cocobread bun, jerk chicken wings and jerk hummus. All of which tick the sun down special box (Dhs30 each, usually around Dhs50 each). 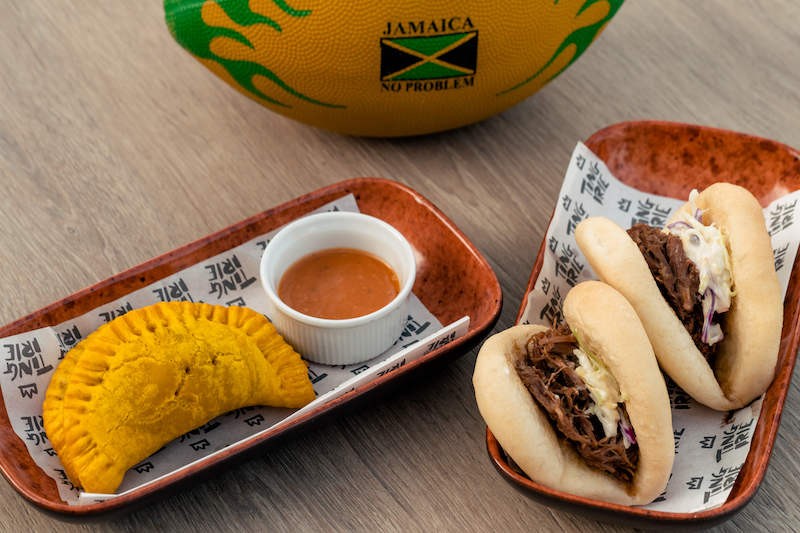 The jerk chicken wings are loud and fiery, playing carnival pyrotechnics on the olfactory stage. The oxtail coco bun is a triumphant spicy mouthful of stew and slaw, and tantamount to a tropical reimagining of a Japanese bao. Our beef patties are all the way authentic, that jaundiced crumbly pastry tugging on taut nostalgia guide ropes. The accompanying dipping sauce is warm and fragrant. But, truth be told, we’re left craving Encona Scotch bonnet sauce for the dipping. We’re basic like that.

Jerk hummus receives a less certain appraisal from the group. It’s not obnoxious, the flavour profiles of hummus and jerk seasoning don’t clash in any overtly detrimental way. But is their union worthwhile? The jury is still deliberating. 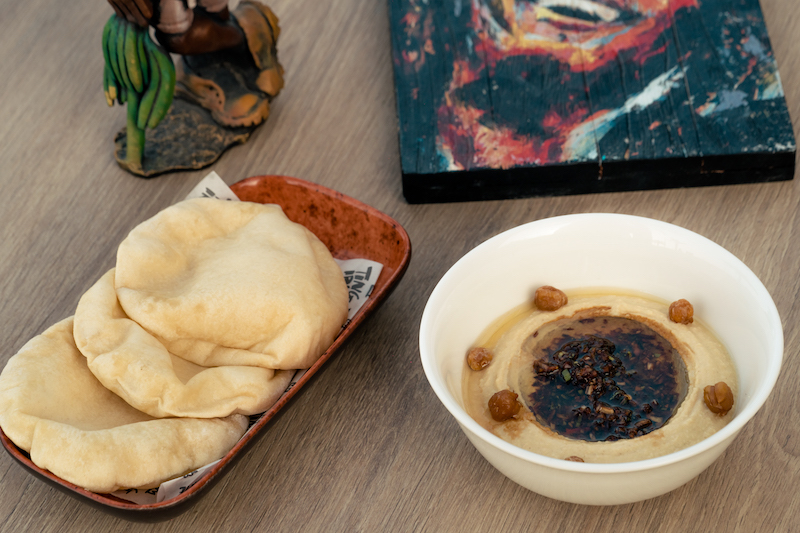 We’ve gone for a classic trio of main dishes. Jerk chicken, curry goat and oxtail stew (usually around Dhs150, each dish is Dhs75 with the Friday Sun Down special deal). It’s impossible to fault the flavour of these Jamaican staples, they hit all the right chords. But in terms of the execution and presentation — they feel a long way from the raw splendour of auntie’s bubbling pots, or the compartmentalised polystyrene boxes you pick up from rickety tables at North London carnival sound stages. 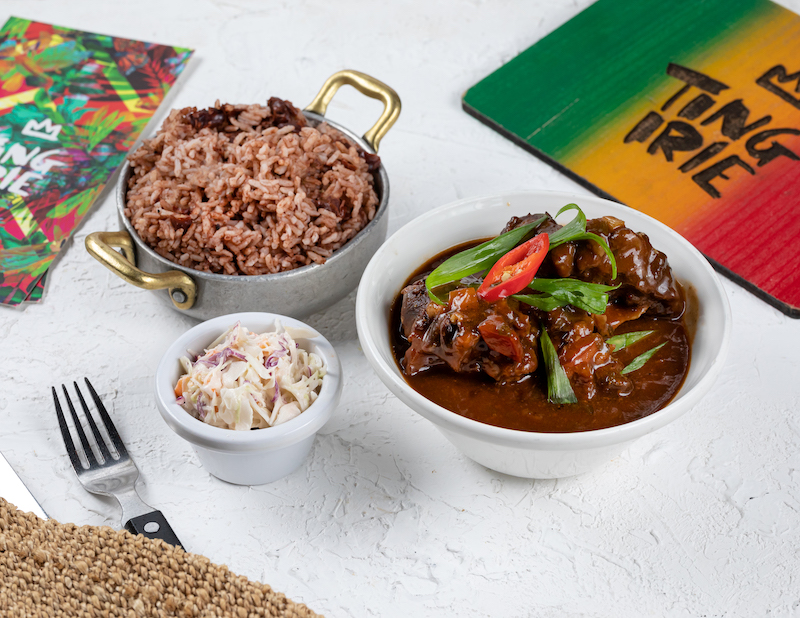 That’s not necessarily a bad thing. This is, in essence, a celebration of Caribbean culture, just with a UAE edge to it. Like the way Brits have created their own ‘Indian’, Indians have built their own ‘Chinese’ and the Chinese, have their own version of ‘Americana’. It’s not fusion food, just cuisine seen through a different cultural lens.