This intimate jazz lounge is a superb date night spot

With seating for just 40, detailed decor and a roster of top acts, this might just be the best new live music venue in Dubai…

Jass Lounge is not easy to find. DIFC’s newly opened jazz bar is tucked away in a corner of Gate District 2 (just down the road from Amazonico), and we’ve walked past it twice before eventually locating its entrance. But that’s arguably part of its allure, like it’s designed only for those in the know.

Forgoing the usual Dubai mantra that bigger is better, when we walk in to Jass Lounge we count seating for roughly 40, including a handful of stools at the bar. Even that many seats feels like a squeeze, and our table for two is within touching distance of those infront, behind and to the right of us. By the end of the evening, you’ll undoubtedly know your neighbours. 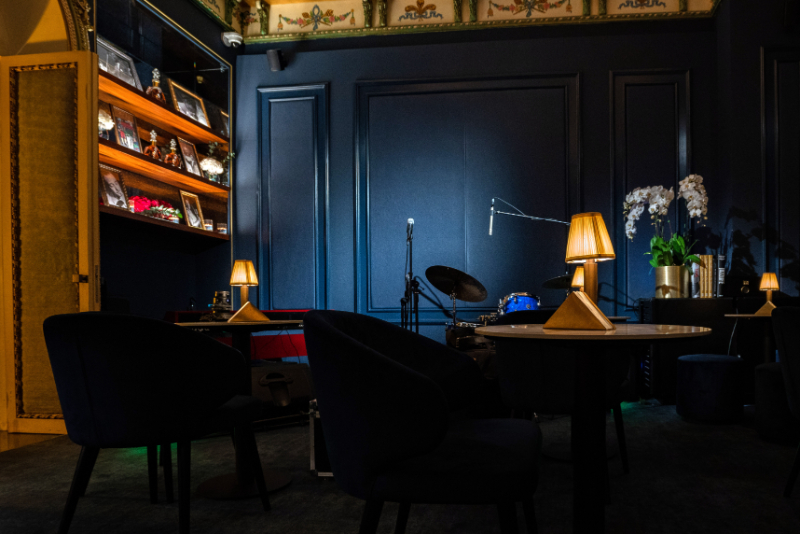 While there’s a regal opulence to the decor, the feel is instantly inviting – and we’re struck by the impressive attention to detail. The walls are painted in aegean blue with gold accents everywhere from the fully-stocked bar shelves to the ornate gold archway entrance, to a corner bookshelf stacked filled with gold photo frames of the world’s greatest jazz artists. Even the ceiling is covered with an abstract mural in pale blues and greys, edged with intricately painted crowning that gives it a grand feel. 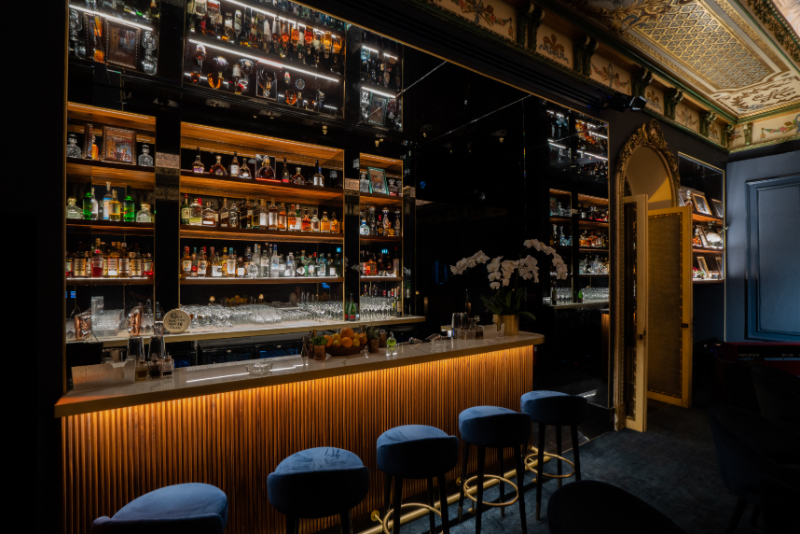 Make no mistake that this is a drinks-only bar – no burrata nor beef tartare in sight: a small slate cheeseboard is the only thing you’ll find to graze on. But with entertainment starting from 10pm onwards, guests aren’t here to eat. Many are sipping on one of the 13 signature Jass Lounge cocktails that include our pick, the Jass O Clock (Dhs80) a refreshing mix of prosecco, chamomile syrup, gin and tonic. We also enjoy a Jasspresso Martini (Dhs85), the bar’s take on an espresso martini, which is the ideal serve for a night that goes until the early hours.

Different bands perform each night, ranging from soulful jazz classics to Latin jazz and even jazz tunes with Oud. The roster of acts is curated by Jass Lounge’s in-house musical director Tonatiut Zardon, who also plays an array of instruments as part of Nuovo Soul, the band we see live one Friday night. The four-piece band faultlessly play to the crowd, wowing guests with note-perfect renditions of Whatever Lola Wants, Fever and Fly Me To The Moon.

Bars
Nightlife
EDITOR’S PICKS
Here's the full list of UAE public holidays in 2023
READ MORE
23 incredible things to look forward to in the UAE in 2023
READ MORE
Hidden gems: 10 UAE desert pop-ups to discover this winter
READ MORE
Where to travel in 2023: 10 new flight routes from the UAE
READ MORE
MOST POPULAR
Pics of the week: Your best photos of the UAE
Dhow & Anchor has got you covered every day of the week
RTA: All the road closures you need to be aware about
Review: The Nice Guy Dubai
Masha and the Bear is coming to Abu Dhabi this April
YOU SHOULD CHECK OUT
Our website uses cookies and other similar technologies to improve our site and your online experience. By continuing to use our website you consent to cookies being used. Read our privacy policy here.