Two areas where, traditionally, it has faired less well in the international court of public opinion, are World Cup trophies and food. In fairness, there have been real developments in the latter half of those two failings. The UK’s reputation for questionably bland grub is steadily being fish ‘n’ chipped away at by an ambassadorial envoy of celebrity chefs, Michelin Starred restaurants, and ubiquity of TV cooking shows.

“Perhaps now is the time then”, Nahaam at Conrad Abu Dhabi Etihad Towers must have thought, “to fly the Union Jack high and proud and celebrate this new, improved era of British cuisine”, because that’s what they’re doing with ‘Pardon my Brunch’ at their glass-fronted poolside diner. 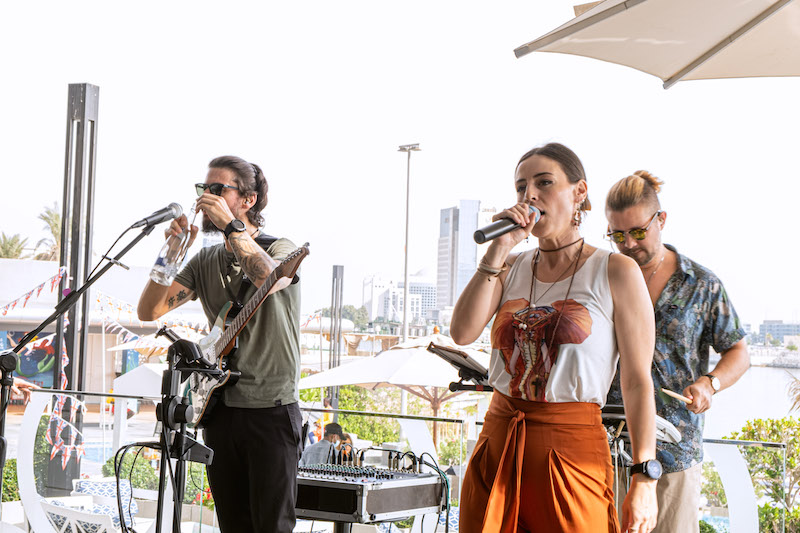 It’s a particularly brave move for Nahaam because it operates one of the capital’s best-loved brunches (your winner of ‘Favourite Brunch’ at the What’s On Awards Abu Dhabi 2022, no less).

Keep calm and carry on

The layout will be familiar to those that have brunched here before, we’re on our first tour of the dining stations inside the restaurant — and stop number one is the seafood station. The changing of the thematic guard has seen no slip in shellfish standards, fleshy crab and lobster claws doused (by us) in questionable quantities of Marie Rose sauce are a powerful start to the meal. There are oysters too, ceviches and smoked fish for those with a pescatarian leaning. 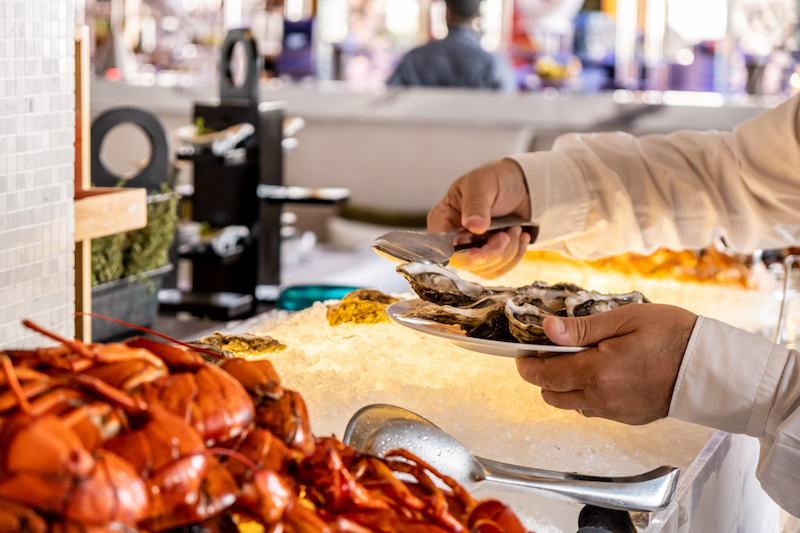 Whilst seated there are periodical visits from roaming food servers doing tube map laps of the venue. Our favourite line in this tableside service was the rose pink-centred lamb wellington. The duxelle, crispy pastry, meat and mushroom sauce drizzled on top were a worthwhile side track.

We’re already off in search of the next course though, and have made our way to the alfresco terrace with the band knocking out a cheeky rendition of some Maroon 5 pop bop, somewhere in the background. This is where the upper lip really begins to stiffen. The live cooking stations feature a carvery section with roasted joints of beef, lamb, and chicken; establishing the UK authenticity credentials further with Yorkshire puddings, gravy and mint sauce. 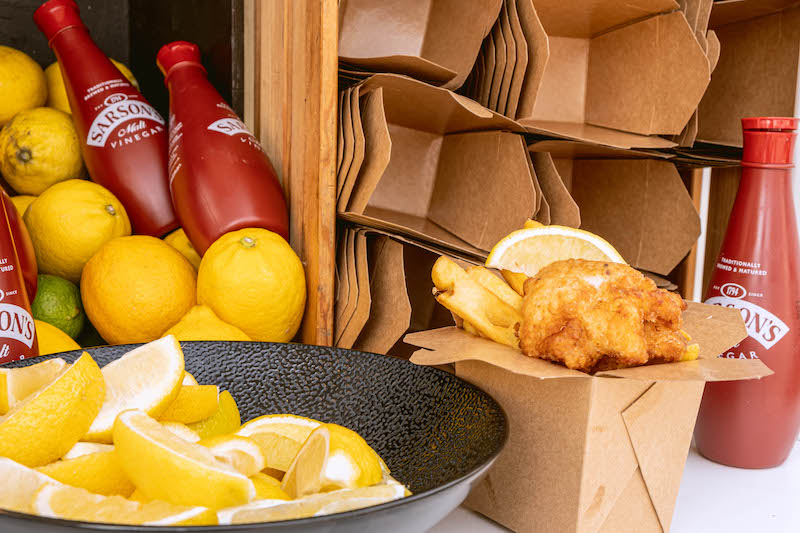 There’s a curry station, representing the cosmopolitan palate of modern Blighty (as well as the less palatable reasons behind it), there are pies, tikkas and koftas and a mini ‘chippie’ serving up fish and chips, with Sarson’s malt vinegar and mushy peas. If you want to take a little trip over the channel, you’ll also find some, great fire-baked pizza (and sushi elsewhere). 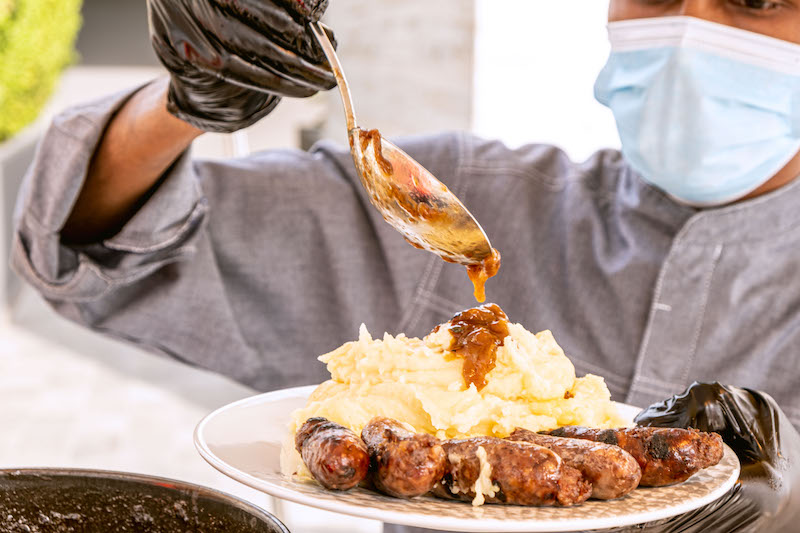 We’ve assembled ourselves a busy plate of what we’ll call Thamesian tapas. There should never have been any doubt. The quality here is easily better than you’re likely to find in 95 per cent of contending restaurants and pubs inside the UK. Our picks for Top of the Pop-ups are the superb roasted sirloin, battered fish, and pepperoni pizza, which comes with a suspiciously strong Italian accent.

We’ve Eton all the sweets

Brunch ends in a theatrical performance worthy of a place in Covent Garden’s courtyard. A table-top Eton mess — edible artefacts of dessert (fruit, candy, coulee, chocolate orbs etc) are smashed, drizzled and squirted onto a glass-walled counter along with lashings of liquid nitrogen, presumably for that dramatic Wuthering Heights aesthetic. We load up the plate for one last big push, and as the band play their farewell track, we can say with all honesty that there’s a corner of this hotel that is now forever Britain. Or at least until they change the theme. 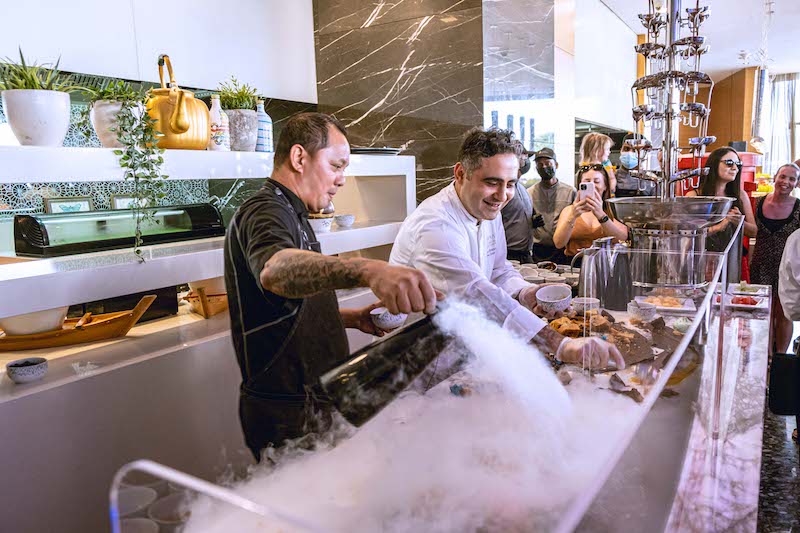 Verdict: The culinary updates to Nahaam’s line-up are a nice nod to a cuisine culture that has more to offer than its often fiven credit for. It’s all put together royally well and if anything, only cements the venue’s position in the top tier of capital brunches. His Madj would be proud.

Brunch
Eat & Drink
Family
Things to do
EDITOR’S PICKS
Here's the full list of UAE public holidays in 2023
READ MORE
23 incredible things to look forward to in the UAE in 2023
READ MORE
Hidden gems: 10 UAE desert pop-ups to discover this winter
READ MORE
Where to travel in 2023: 10 new flight routes from the UAE
READ MORE
MOST POPULAR
UAE sends aid and rescue teams to earthquake-hit Turkey and Syria
26 of Dubai's best beachfront restaurants
8 wonderful things to do in Dubai this week: Feb 6 to 9
Where to go to get your Al Baik fix in the UAE
Reset and recharge with a relaxing staycation at this stunning Dubai hotel
YOU SHOULD CHECK OUT
Our website uses cookies and other similar technologies to improve our site and your online experience. By continuing to use our website you consent to cookies being used. Read our privacy policy here.