Review: Piatti by the Beach at Raffles The Palm

There’s something undeniably special about beachfront dining in Dubai. It might be because it’s reminiscent of summers spent on the European coast, the gentle sea breeze and golden stretch of sand mere steps away giving an instant on-holiday feel. But more than that, it’s the incredible views these seaside spots command, usually of the distant skyscrapers that make Dubai’s skyline so iconic.

This comes into particular focus at Piatti by the Beach, where a table on the whitewashed terrace of this Italian-inspired taverna comes with vistas of the Burj Al Arab, Burj Khalifa and Ain Dubai. Perched on the beachfront of palatial Raffles The Palm, Piatti is refined without loosing its relaxed beachfront, Positano-esque charm, with indoor and outdoor space blending seamlessly, bright pink bougainvillea climbing the pergola, and a fresh fish counter displaying the impressive array of seafood that can be cooked to order. 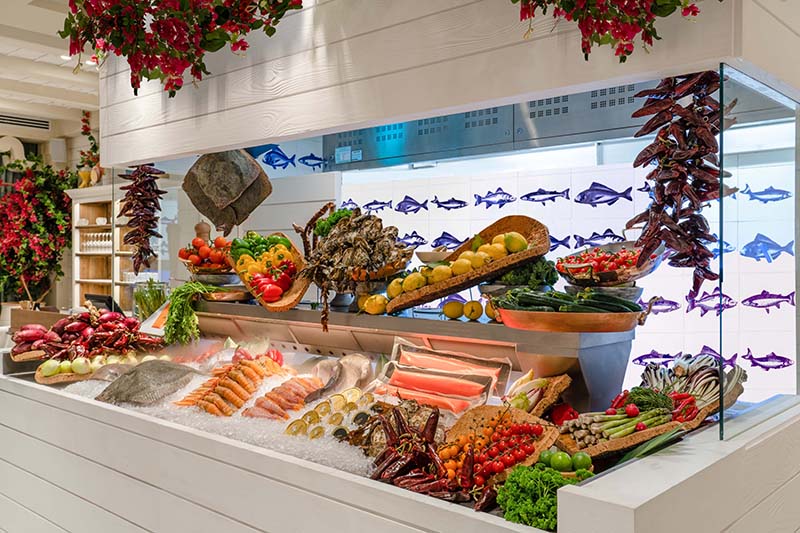 On our visit, the corner backdropped by the unmistakable hotel facade is set up with a stage for Gianluigi Lembo and Anema e Core, a beloved Capri band that have performed for some of the world’s biggest celebrities, who are in the final week of their residency. Despite having been in Dubai mere weeks, they’ve already won a legion of fans, and appear familiar with all those frequenting the front row tables. That’s not to say those of us a little further away don’t feel involved, and when the friendly general manager passes round tambourines, few tables turn them down. Through an impressive three-hour set, Gianluigi leads renditions of party-starting renditions of Can’t Take My Eyes Off You, That’s Amore and New York New York with an unmatched energy that have the whole restaurant dancing.

A post shared by Piatti By The Beach (@piattibythebeach)

But with or without band, dining at Piatti is a true treat. We pour over the menu much longer than usual simply because we’re spoiled for choice. Kicking things off, Gillardeau Oysters (Dhs40 per piece) are meaty and flavourful, served on a bed of ice and require only the quickest squeeze of lemon. A beef carpaccio (Dhs170) is given a Piatti twist with fresh figs and a punchy horseradish. Among the must try starters, lightly fried fritto misto (Dhs180) arrives as a generous portion of prawns, squid and anchovies are perfectly dunkable in a homemade tartare. Seabass tartare (Dhs150) is the only starter that doesn’t measure up, neatly diced and undeniably fresh, but simply paired with apple it doesn’t have the zesty flavour we were hoping for.

The spaghetti alle vongolle (Dhs170) is twirl-able ribbons of homemade spaghetti di gragnano, in just the perfect amount of garlic and chili seasoning. While it might not be a traditional Italian dish, the tagliata di Wagyu (Dhs350) arrives cooked to perfection, each perfectly cut piece of meat deliciously tender. A special mention should be given to the creamiest, buttery truffle mash potato, we only wish there was more of it.

It’s easy to let the menu become secondary to entertainment in a restaurant like this, but Piatti offers that lively Italian dining experience while still presenting a standout menu.