GOLDEN GATE BRIDGE
Where: San Francisco, California
Built: 1937
The most photographed bridge in the world, the Golden Gate Bridge is a suspension bridge spanning the Golden Gate strait, the mile-wide, three-mile-long channel between San Francisco Bay and the Pacific Ocean. The structure links the hilly city of San Francisco and picturesque Marin County. Declared one of the Wonders Of The Modern World by the American Society Of Civil Engineers, get your best view out of the city at the North end, then take a short cruise along California’s Highway 1 to Sausalito, a sleepy fishing village that serves the best seafood in California. 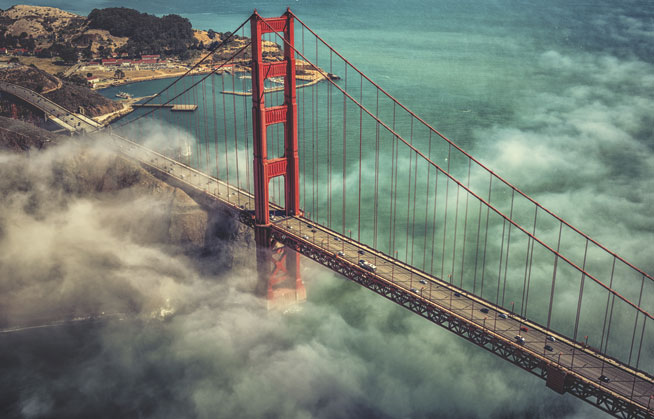 STATUE OF LIBERTY
Where: New York City, New York
Built: 1886
Designed by Frédéric Auguste Bartholdi, the gigantic green goddess was given by the people of France to the United States to celebrate their break from British rule. The 93m statue is of a robed female figure representing Libertas, the Roman goddess of freedom, who bears a torch and a tablet, (not an iPad kind of tablet, you understand) upon which is inscribed the date of the American Declaration Of Independence: July 4, 1776. A broken chain lies at her feet. The statue is an icon of freedom and of the United States: a welcoming signal to immigrants arriving for a new life, or even to weekenders eager for a slice of the Big Apple. Avoid the queues and tourist traps and jump on a free ferry to Staten Island for a great view of Lady Liberty. 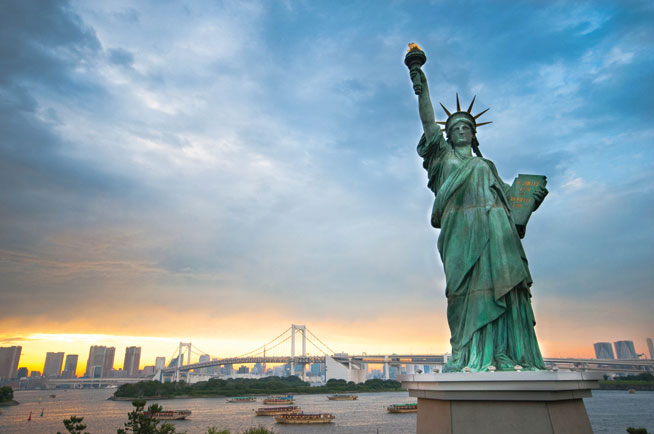 GRACELAND
Where: Memphis, Tennessee
Built: 1939
In early 1957, Elvis Presley gave his parents a $100,000 budget, and asked them to find a farmhouse in Memphis with gates to keep his fans away. They found him Graceland. Now one of the most visited houses in America, Elvis died in the upstairs bathroom at the estate on August 16, 1977. Today Presley, his parents Gladys and Vernon, and his grandmother are buried there in what is called the Meditation Garden. A memorial gravestone for Presley’s stillborn twin brother, Jesse Garon, is also at the site. Avoid visiting in August, when die-hard Elvis fans crowd the place looking for signs The King is still alive. 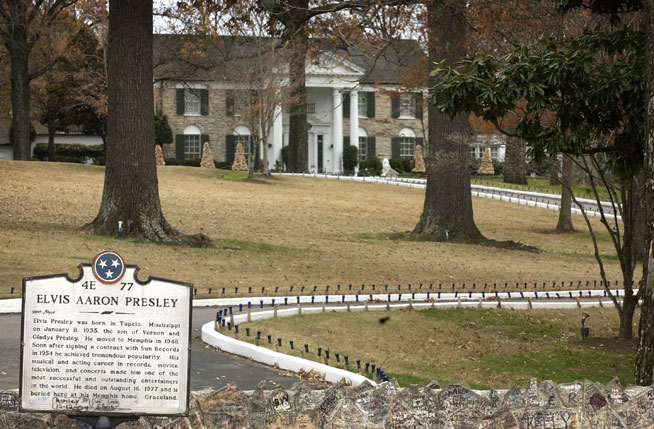 THE HOLLYWOOD SIGN
Where: Los Angeles, California
Built: 1923
High up in the Santa Monica Mountains, overlooking Tinseltown, the sign originally read ‘HOLLYWOODLAND’. Its purpose was to advertise the name of a new housing development in the hills above the Hollywood district of Chinatown. HJ Whitley had already used a sign to advertise his development Whitley Heights, which was located between Highland Avenue and Vine Avenue. He suggested to his friend Harry Chandler, the owner of the Los Angeles Times newspaper, that the land syndicate in which he was involved make a similar sign to advertise their land. The last four letters may have dropped off but the impact remains the same. Get your best look from the Griffith Observatory or, if you’re feeling athletic, during a hike at Runyon Canyon. 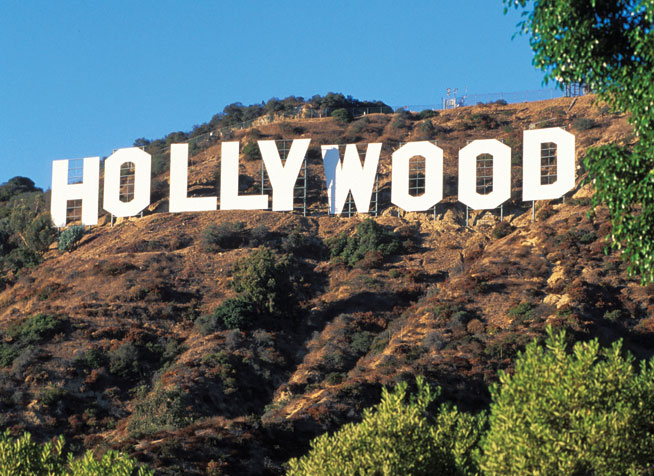 THE GATEWAY ARCH
Where: St Louis, Missouri
Built: 1965
A glimmering metal rainbow in the Midwest, at 192m high The Gateway Arch monument in St Louis is the tallest man-made monument in the United States and the world’s tallest arch. Built as a monument to the westward expansion of the United States, it is the centrepiece of the Jefferson National Expansion Memorial and has become an internationally famous symbol of St Louis and the growth of a new America. Languishing exquisitely on the west bank of the Mississippi River, it was designed by Finnish-American architect Eero Saarinen and German-American structural engineer Hannskarl Bandel at a cost of $13 million. Today, visitors can take a tram ride up to the top of the arch for stunning views across the city of Cardinals Baseball. 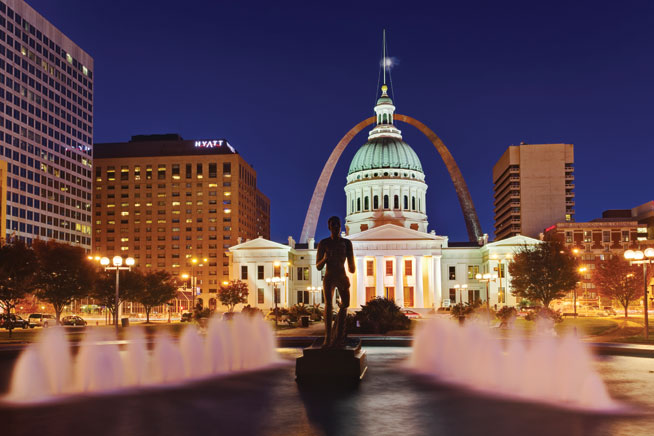 THE WELCOME TO FABULOUS LAS VEGAS SIGN
Where: Las Vegas, Nevada
Built: 1959
This iconic piece of Americana has been dazzling tourists with its yellow light bulbs for 50 years. The eight metre tall ‘Welcome’ sign has become the world standard in kitsch classic roadside design and has been added to America’s State Register Of Historic Places. Thankfully, visitors no longer need to snap a picture as they’re racing along the strip because a new car park has been built in the middle of the road for people to safely stop off and pose underneath for as long as they like. 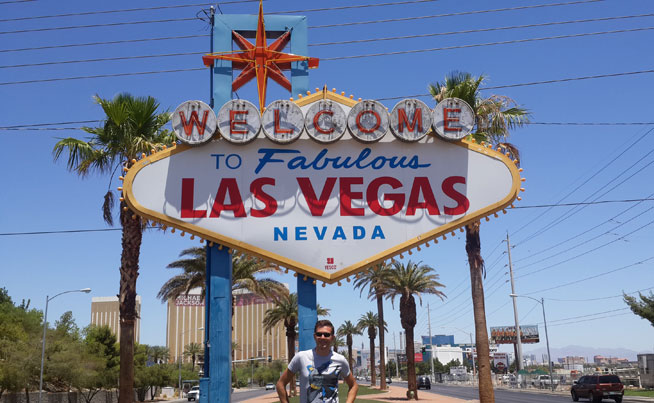 MOUNT RUSHMORE
Where: Keystone, South Dakota
Built: 1925
The Mount Rushmore National Memorial is a sculpture carved into the granite featuring 60-foot sculptures of the heads of the four greatest United States presidents: George Washington, Thomas Jefferson, Theodore Roosevelt and Abraham Lincoln. South Dakota historian Doane Robinson is credited with conceiving the idea of carving the likenesses of famous people into the Black Hills region of South Dakota to promote tourism in the region. Choosing four great American heroes must have worked, as more than two million people now see the attraction every year. 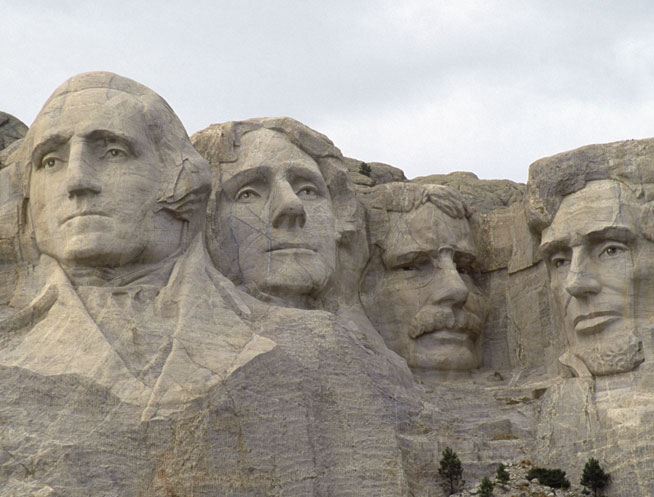 THE DUKE KAHANAMOKU MEMORIAL
Where: Honolulu, Hawaii
Built: 1990
Waikiki Beach has been a surfer’s paradise since Hawaiian royalty used it as a retreat in the 1800s, cruising the ocean on early forms of longboards. So it’s only fitting this is the place of the memorial to America’s Father Of Surf, Duke Kahanamoku. A bronze statue at Waikiki in Honolulu honours his memory, showing Kahanamoku standing in front of his surfboard with his arms outstretched. After a day bobbing about in the surf, pay tribute to him at sunset by placing a flower lei around one of his wrists. The Duke is set up with a webcam, allowing visitors from around the world to say aloha to their friends while surrounded by palm trees and golden sand. 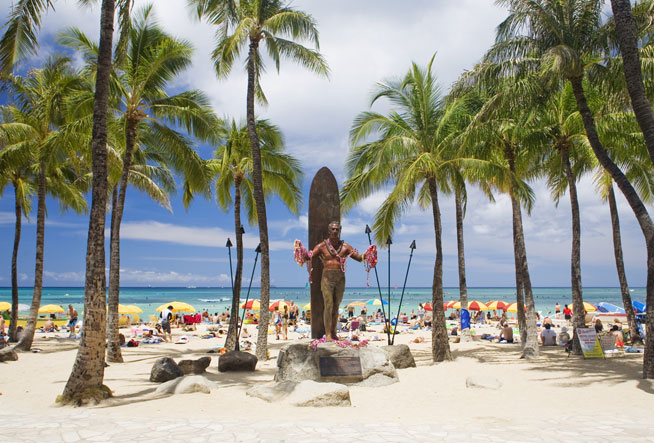 Travel
EDITOR’S PICKS
So, when is the next UAE public holiday in 2021?
READ MORE
All of the lavish new hotels set to open in Dubai in 2021
READ MORE
16 of the best pool passes in Dubai that are fully redeemable
READ MORE
All of the restaurants at West Beach, Palm Jumeirah
READ MORE
MOST POPULAR
Celebrate Christmas early with these 'Halfway to Christmas' brunches
Pics of the week: Your best photos of the UAE
What’s On The Bookshelf: Rom-coms great for reading on the beach
Book your holiday package from Dhs1,399 per person with Holidays by flydubai
Immersive cabaret concept The Theater Dubai opens its doors
YOU SHOULD CHECK OUT
Our website uses cookies and other similar technologies to improve our site and your online experience. By continuing to use our website you consent to cookies being used. Read our privacy policy here.