VIDEO: Meet The Illusionists - are you ready to be amazed?

What’s On meets The Illusionists in Dubai as they bring Illusionists 2.0 tour to UAE, to Dubai World Trade Centre and Emirates Palace Theatre. See video.

After a sell-out success in the UAE last year, The Illusionists return with a new cast and new tricks, and all-new wow factor. Six highly-skilled performers, each with their own specific area of expertise, will have audiences scratching their heads and gasping, “How did they do that?”

Six new acts are on board for the upcoming run: The Warrior, The Deceptionist, The Unusualist, The Futurist, The Manipulator, and The Master Magician in a show titled The Illusionists 2.0. The World Trade Centre is hosting ten performances featuring giant 3D projections, video screens and other cutting edge technology.

Fans will be able to meet the stars of The Illusionists at the official opening party for 2.0 Witness: The Impossible, at Buddha-Bar, Grosvenor House. On Tuesday September 30, the six performers will attend the night spot. Doors open at 8.00pm and guests are asked to come dressed to impress. Prior reservations are required and can be made by calling (04) 317 6000.

In the meantime, you can hear from three of the acts…

I am The Futurist. I combine technology with personality and music.
Tricks always go wrong. Being a professional is being able to cover it up so the audience doesn’t realise anything is wrong. Live entertainment is all about uncertainty, which is what makes it exciting.
Joining the Illusionists was simple. They contacted me, we started talking, they came to a show, and bam!
My favourite trick involves me cloning myself onstage. Then I teleport myself from one side of the stage to the other.
The first trick I ever performed was a simple card trick. It fooled my mum and I was hooked. Seeing her face of confusion mixed with joy was an addictive response that I wanted to recreate over and over again. 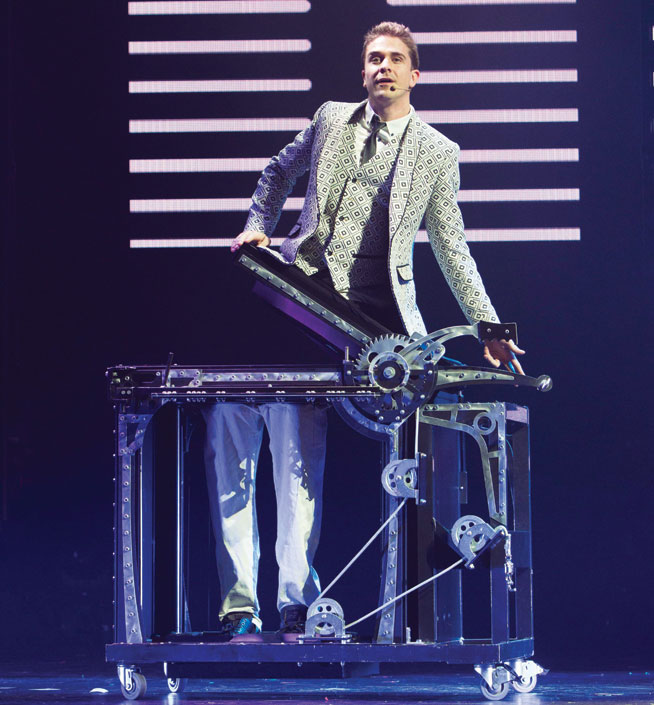 My family has always been amazingly supportive. My mum would drive me to all of my early shows because I wasn’t old enough to drive. My sisters were my first on-stage assistants, and my dad would run the spotlight. It was a complete disaster theatrically, but the message of support and love shone through all the missed cues.
Growing up my biggest inspirations were David Copperfield and Michael Jackson. I would watch their videos every day before school. I would emulate them in my talent shows when I was in middle school. I’ve made sure I destroyed all those tapes.
I think my show brings people from different backgrounds together. It makes them feel pure wonder. Illusions can steer people’s emotions to amazing places.
I involve the audience a lot so that every show is different. Every night there are crazy people that get onstage and change the whole trajectory of the show.
Comedy and illusions go hand in hand. The harder they are laughing, they more unsuspecting they become.
My advice to aspiring illusionists is to practise, practise, practise. Get enough courage to perform onstage. Listen to the mean comments. Repeat.


My act is stage manipulation. I work entirely with my sleight-of-hand abilities and try to make it look elegant and beautiful.
My best trick involves cards. Simply put, I produce and vanish cards from my empty hands. I started doing it when I was eight. It was the first trick I ever tried.  I was fascinated by it. That was back in 2001. I knew this is what I wanted to do. Throughout the years I practised with love, dedication, and passion.
To this day I have yet to encounter a major accident on stage. But I did have a few circumstances where I was a bit shook up. These are the times when I almost tripped on stage or forgot to bring a prop.
There are innumerable tricks I have not been able to do. I doubt that I’ll ever be able to do them all in my lifetime.
My friends and family expressed their concerns and dissent ever since I began working on my art at the age of eight. Now, however, my parents acknowledge my passion and give me their full support.

Basically, my act is performing comedy and illusions. So whatever an audience doesn’t laugh at, that’s the illusion.
My best trick is this one: I walk down the street and turn into a bar. Poof!
I’ve never had an accident on stage. Unless you count one of my doves pooping on stage as an accident.
My act is 90 per cent showmanship. Then maybe seven per cent technical ability, and the remaining five per cent is mathematical aptitude.
I haven’t suffered many injuries on stage. Although I once did pull a groin muscle.
There’s one trick I have not been able to do: Overdraw on my bank account without the bank manager noticing.
When I’m backstage I don’t watch the other acts. I can’t see them from behind the stage. Was that a trick question?
My friends and family? They still think I work at McDonald’s.
There was a moment when I realised I wanted to be a full-time illusionist. It was after I got fired from McDonald’s.
The first trick I ever performed as a kid was a trick my grandfather taught me. I walked up to a friend and said, ‘Pull my finger.’

Culture
News
Theatre
Things to do
EDITOR’S PICKS
Ramadan in Dubai: 50 iftars to try
READ MORE
Where can Dubai residents travel? Check out these 14 destinations
READ MORE
Rumours, facts and reveals: New Abu Dhabi bars and restaurants
READ MORE
UAE announces reduced working hours for Ramadan 2021
READ MORE
MOST POPULAR
There's a 30 per cent sale taking place during the long weekend on LegalHomeDelivery.com
Pics of the week: Your best photos of the UAE
Here's why you need to visit Mimi Kakushi's new Friday lunch
New films to watch in cinemas this week: May 13 to 19
Torno Subito's new lunch menu offers a quick mid-week vacation
YOU SHOULD CHECK OUT
Our website uses cookies and other similar technologies to improve our site and your online experience. By continuing to use our website you consent to cookies being used. Read our privacy policy here.