When the Creamfields brand left its Liverpool home in 2002, many thought it was the end. Instead, it went on to revolutionise dance music, with branches springing up all over the world. Now we see the Creamfields party return to Abu Dhabi….

Back in 2002, after a decade as one of the biggest, most celebrated names in dance music, Cream cancelled its UK weekly night at Liverpool club Nation. It’s a sign of just how important Cream was in the evolution of club culture in the country – from free, ramshackle outdoor raves, to superclubs, super-organised – that the news was widely regarded as the death knell for dance music. It couldn’t have been farther from the truth.

Three mates, James Barton, Darren Hughes, Andy Carroll, founded Cream in 1992. From a few hundred clubbers, that first Saturday night in October, to several thousand each and every week, Cream quickly established itself as one of the biggest players in the burgeoning dance music business. The logical step was to expand  – the logical destination being Ibiza. It made Amnesia its home away from home in 1994, the same year Mixmag named Cream its club of the year. Its DJs, Paul Oakenfold, Paul van Dyk, Carl Cox, Sasha, became superstar DJs.

In 1998, Cream took the party outdoors. Cream became Creamfields. Over the past 15 years the outdoor event has gone on to become one of the world’s biggest dance festivals, with parties everywhere from Moscow to Mexico City, Andalucia to our very own Abu Dhabi.

The Creamfields in the capital, in 2009, had headlining Deadmau5, Calvin Harris, Underworld and Sasha. Each year since has brought an equally exciting line-up, and this year is no exception. Taking to the decks at du Arena, Yas Island, on Friday December 12 are Dutch stars Hardwell and Afrojack, Swedish techno producer and DJ Adam Beyer and Italian legend Marco Carola.

Freeing itself from the shackles of a weekly club night in 2002, a move born more out of necessity than design, ended up keeping Cream one step ahead of the competition. The focus shifted to Creamfields, and the festival has gone on to blossom.

TOP OF THE BILL
Hardwell, who topped last year’s industry respected DJ Mag Top 100 DJs, has seen his stock rise since his breakthrough in 2011, helped in part by his mentor and fellow-countryman Tiesto. Known for his energetic, big room sets, the 26-year-old, real name, Robbert van de Corput, has more than 100 million views on his personal YouTube channel and has released five compilation albums. A debut release of his own work is expected to drop next year. He was last in the region early last year, taking to the decks on Nasimi Beach at Atlantis, The Palm. 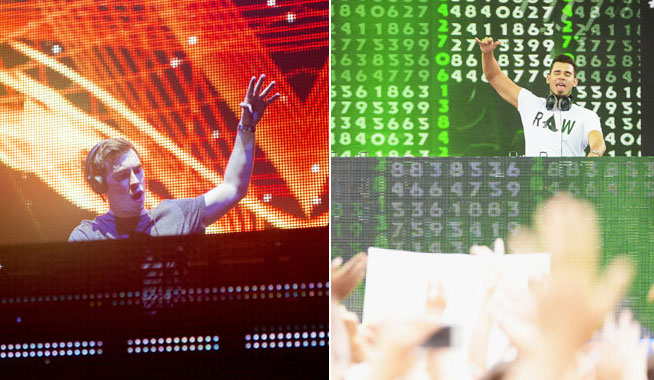 Afrojack, another Dutchman, meanwhile, has enjoyed more mainstream success thanks to appearances on tracks like ‘Give Me Everything’ by Pitbull, and ‘Run The World (Girls)’ by Beyonce. The 27-year-old, who is notorious for his wild spending habits having crashed a brand new Ferrari as soon as he’s bought it, has headlined major worldwide festivals including Europe’s Tomorrowland and UMF, Coachella and Electric Daisy Carnival in the USA. One of his more recent visits to the UAE was to O1NE – also on Yas Island – while he also tore the roof off dxb Music Festival back in 2012. His first solo album, Forget The World, was released in May and though it received mixed reviews, saw two tracks chart in the UK.

PLAYING THE FIELD
When the Creamfields bandwagon rolls into Abu Dhabi in December, it brings with it some of the biggest names in electronic music today. But from the bottom of the bill up, beneath headliners Hardwell, Afrojack, Adam Beyer and Marco Carola, sits some of the best local DJs the UAE has to offer. Mr. Mr, Audio Tonic DJ and promoter, explains why the event is crucial for club culture in the UAE.

How important are events like Creamfields to the UAE? Creamfields is a globally recognised dance music event, so having the brand name in the UAE show the country as somewhere that dance music is taken seriously. OK, the line up might not be like that of its sister festivals around the world, but that’s because we just don’t have enough people here. 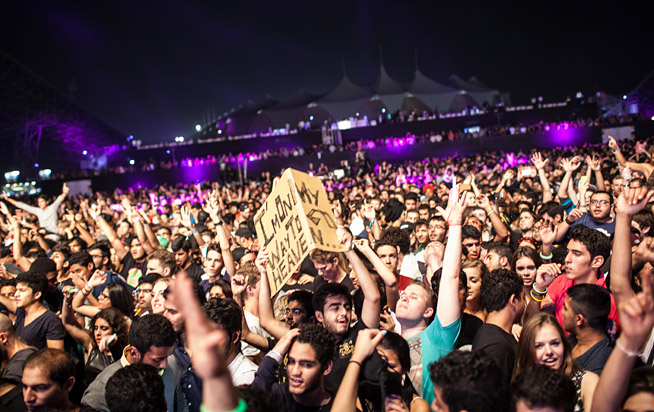 What do you get from these events as a DJ? A big buzz. Nothing better than seeing people lose themselves when you’re behind the decks. It’s a feeling of pride and passion, I guess, knowing that you make people dance and smile is just awesome.

In what way do you have to change the way you play at these things, compared to a more intimate club setting? I don’t, really. If anything I’ll play my peak-time sound, but earlier on in the night. It’s a big space to fill and a big soundsystem. Let’s face it, people are there to rave on.

Thinking about when you started putting parties on, how is the UAE different now compared to then? It’s very different indeed. There are so many events happening seven days a week now, and a lot of promoters putting on parties very similar to the one next door. Competition is fierce but then that’s the same with every business. Quality and consistency always shine through, so the parties put together with pride always remain. Those that are done to make a quick buck, well, there’s no room for those.

HEAR FROM A HEADLINER
In the age of the one-hour DJ set, Marco Carola is something of an anomaly. You’ll often hear his peers talk about taking the crowd on “journey.” But to do that, to really do that, the Italian DJ says you need time, patience and an appreciation of  your craft: “The really special nights,” Carola said, “the ones where the crowd are in a trance and whatever record you play is the perfect record for that moment, that takes eight or nine hours.

Carola is 40 next year. He started going clubbing, in his native Naples, the “craziest city in Europe”, when he was just 13. The club was called Kiss Kiss, owned by his best friend’s dad. He bought his first set of turntables at 15 and within two years he was resident at Dynamic Area, a 4,000-capacity club. The Italian has since proved himself equally adept as a producer. But it’s in the DJ boot he feels most at home: “What I do best is making music to be played in a club. My music is made to be mixed. It doesn’t always work on an album.” 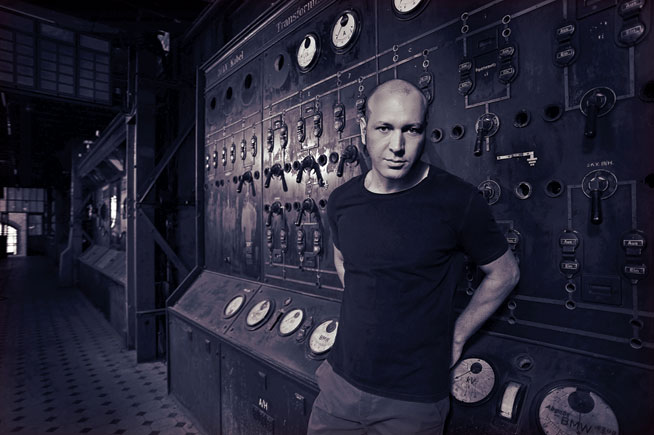 Carola found techno in 1993, and like any self-respecting fan, he made a pilgrimage to Frankfurt. Here he met another techno heavyweight, Sven Vath, who invited the Italian to join his agency. The pair headed to Ibiza at a time when the island was dominated by house and trance. Purists turned their noses up at techno, some still do. When in 2001 Carola started playing at Vath’s night Cocoon at Amnesia, the terrace he would eventual make his own was deserted. Carola, as always, was ahead of his time. By the summer of 2005 his brand of minimal techno was the toast of the island.

He’s not the flashiest of DJs; behind the decks, he’s all business. But few underground DJs engender the kind of devotion Carola does. He now runs his own night, Music On: summers are spent in Ibiza, winters touring the word, as he continues to be most innovate graduate of the class of 2005, taking techno in new and exciting directions. But the business face is here to stay: “Sometimes,” he once said, “when I’m DJing, people ask me what’s wrong. But inside I’m smiling.”

Adam who? A techno DJ and the owner of not one, but four labels: Drumcode Records, Truesoul Records, Code Red and Mad Eye Recordings. Also one half of perhaps the first ever DJ power couple, with wife and fellow Swedish spinner Ida Engberg. 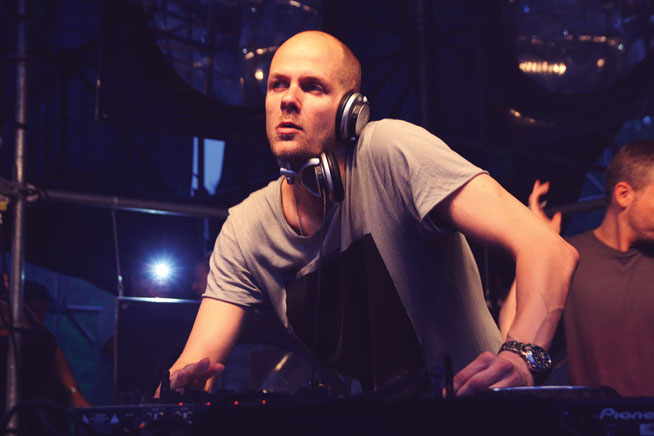 What’s his sound? Techno. Big, tough, dark, dirty late-night techno. But Beyer, as producer, is more than just a punch-out artist, as the deeper, soulful sounds of Teach Me shows. There’s also the pared-down, grooving tech-house of You Know, a collaboration with wife Engeberg. Bu then there’s stuff like Spaceman, made, you feel, with the sole intention of messing with your mind as you sway on some sweaty dancefloor at three in the morning.

Worth seeing play, then? Beyer is craftsman and a technician. The Swede is a compelling figure behind the decks, in a quiet, unassuming kind of way, but one who can lure you in with deep and tech house, and the more musical end of techno, before taking your face off with something that sounds like five Daleks from Dr Who and marching bands fighting in a blender.

News
Nightlife
Things to do
EDITOR’S PICKS
9 royal-approved Dubai restaurants
READ MORE
12 incredible rooftop pools in Dubai to check out
READ MORE
16 of the best beach bars in Dubai for sundowners
READ MORE
Covid-19 rules in Dubai: all the updates you need to be aware of
READ MORE
MOST POPULAR
Join us for a preview of Fairmont Bab Al Bahr's Valentine's dine around
Reform's edible bouquets are a must for meat lovers this Valentine's
Covid-19: Dubai updates travel rules for inbound passengers
The W Abu Dhabi's Wet Deck pool party is absolute weekend goals
7 amazing art sculptures in Dubai you need to check out
Flash sale: 50 per cent off stays at this luxury Palm Jumeirah resort
YOU SHOULD CHECK OUT
Our website uses cookies and other similar technologies to improve our site and your online experience. By continuing to use our website you consent to cookies being used. Read our privacy policy here.