The sun will come out today for Annie at Madinat Theatre

What’s On previews Annie The Musical at Madinat Theatre. The new show for the theatre in Dubai runs from April 2 to 17, with homegrown stars.

With its most famous lyric being, “The sun’ll come out tomorrow”, Annie is a show that’s tailor-made for Dubai. The tale of a red-headed orphan first hit the stage in New York in 1977 and was later turned into a hit 1982 film. The musical comes to Dubai in April with two actresses playing the lead role: Jordan Watton, 14, and 11-year-old Nairne Hannah.

What inspired you to get into acting?
Jordan Watton (JW): I watched pantomimes as a young girl and I used to envy the children on stage – I wanted that to be me.
Nairne Hannah (NH): I watched performers on TV and stage and they looked like they were having so much fun. 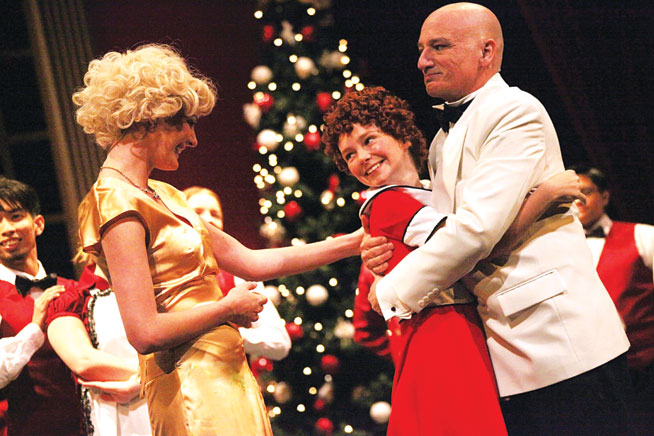 What are your rituals before going on stage?
JW: I warm my voice up by doing scales and exercises to help my breathing and articulation.
NH: I think about my script, my dancing and my singing. But mainly I enjoy the pre-show buzz with the other cast members. There is a real tingle backstage before we go in front of the audience.

Do you get pre-show nerves?
JW: The first few moments of the first show are always scary, but after that I love every minute of it.
NH: The scariest part is thinking that I might make a mistake just before the curtain goes up. But as soon as the show stars I relax and enjoy it.

What do you think of the theatre scene in Dubai?
JW: When I moved here I was unsure if there would be any training academies or production companies. I have been pleasantly surprised by how many opportunities there are.

Any tips for hopeful performers?
NH: Listen to the people who are conducting the auditions and when it’s your turn, take a big breath and remember why you are there.

Culture
Theatre
EDITOR’S PICKS
Breaking: Dubai's major beaches and parks are now open
READ MORE
These Dubai brunches are back in business this weekend
READ MORE
Nikki Beach Resort & Spa launches a new daycation deal in Dubai
READ MORE
Movement restrictions reduced in Dubai from Wednesday May 27
READ MORE
MOST POPULAR
5 things to do in Abu Dhabi this week
Outdoor exercise is now permitted in Dubai from 4.30am
When will Eid Al Adha fall in 2020? An astronomer predicts...
Get free Ski Dubai tickets when you book a staycation at this hotel
Al Wahda Mall has reopened in Abu Dhabi
YOU SHOULD CHECK OUT
Our website uses cookies and other similar technologies to improve our site and your online experience. By continuing to use our website you consent to cookies being used. Read our privacy policy here.