Fan of the X-Factor? Love a bit of One Direction from time to time?

Well, Louis Walsh’s replacement judge on the UK version of the show, Nick Grimshaw, is rumoured to be bringing the boys category to Dubai for the ‘judge’s houses’ round of the popular TV singing contest.

He’s not doing it alone: rumour has it he’ll be accompanied by previous X-Factor star Harry Styles from the band One Direction. That’s right, Harry’s probably coming to Dubai next month.

The last time we saw Harry in Dubai was back in April, where One Direction hosted the biggest concert the UAE has ever seen down at the Sevens Stadium.

The concert was nearly disrupted following the news that One Direction member Zayn Malik had plans to leave the band – leaving One D to perform as a four piece.

Everyone who came to the tour so far, thanks for having us. We had a great last show in Dubai. Huge thanks to all the crew. All the love.

Back to X Factor, the judges’ houses round will this year be aired live for the first time – with Simon Cowell bringing Louis Tomlinson to his home in LA for the ‘overs’ category, Cheryl Fernandez-Versini (formerly Cheryl Cole) bringing back Louis Walsh to host the ‘groups’ category in the south of France, and Rita Ora taking the ‘girls’ category to New York.

According to TV schedules, the judges houses episodes will air around October 24-25, which will mean Harry Styles will be in Dubai then if it’s a live broadcast.

While it’s not totally confirmed yet, the show’s Wikipedia page says Harry will be the guest at the Dubai judges house: 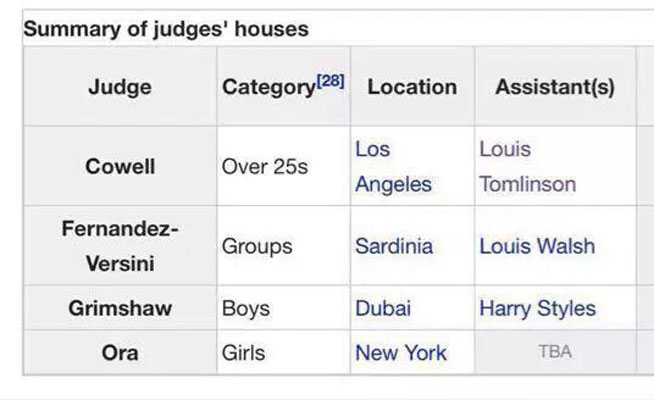 The move to include One Direction and bring back Louis Walsh for the judges’ houses comes after the ratings for X-Factor have fallen to their lowest point in nine years this season so far. Fans don’t seem to feel the show is the same without Louis there to crack jokes and wheel out the clichés.

I love this photo

– Who knows? Perhaps one of the other members of 1D will tag along with Harry for the ride? We’ll certainly keep you posted.