19 cars burst into flames yesterday at Sharjah University, but the UAE’s firefighters managed to contain the blaze before anyone was hurt…

We’ve seen a lot from the UAE’s brave firefighters in the last few months. We saw them along with Sheikh Mansoor bin Mohammed Al Maktoum battling blazes down at The Address on New Year’s, and now more recently tackling a fire that broke out in the women’s section of the Sharjah University car park.

On Sunday morning at around 11.30am, students watched as one car caught fire, eventually exploding and sparking a blaze that ended up destroying 18 other cars that were parked nearby.

Fortunately, no injuries have been reported, and the spread of the fire was stopped thanks to the Sharjah Civil Defence Service, who can be seen here getting up close and personal with the burning cars. Heroes. 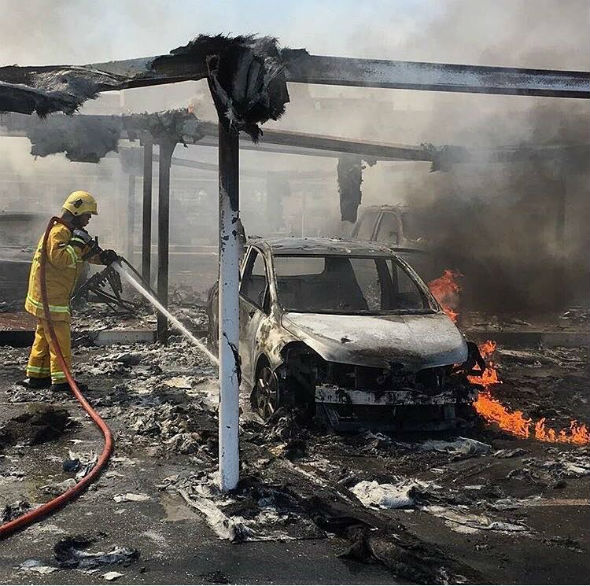 Another video shows people running away from the scene as one car explodes, with the Sharjah Civil Defence spraying down the burning cars with water to one side. (Click to play the video.)

*More: Dubai firefighters to get jetpacks*

Here the fire can be seen raging in full force:

*More: VIDEO: Watch a Lamborgini Aventador go up in flames*

This clip shows one of the brave Sharjah Civil Defence firefighters cooling down the charred remains of the cars:

*More: The man that lost over Dhs1.3 million of art in The Address fire*

This user captured the aftermath of the fire, showing the shells of the destroyed cars as well as the completely melted car park shelters:

What exactly started the fire hasn’t yet been announced, but Sharjah police have started an investigation to get to the bottom of it all.

News
EDITOR’S PICKS
What’s On Nightlife Awards 2021: Here are the nominees...
READ MORE
It's back! What's On Lock In returns to Media One Hotel
READ MORE
Arts and culture: 5 spots we can't wait to visit at Expo 2020 Dubai
READ MORE
UAE petrol prices are set to decrease in September 2021
READ MORE
MOST POPULAR
Dubai Safari Park reopens for a new season on September 27
Where to see fireworks in Dubai tonight
7 awesome things to do in Abu Dhabi this weekend: Sep 23 to 25
10 awesome things to do in Dubai this weekend: September 23 to 25
White Dubai to reopen as a dining and entertainment lounge
YOU SHOULD CHECK OUT
Our website uses cookies and other similar technologies to improve our site and your online experience. By continuing to use our website you consent to cookies being used. Read our privacy policy here.