Think twice before you casually (and rudely) toss that chocolate wrapper on a pristine Dubai beach, as Dubai Municipality is going to start using unmanned drones to catch people littering red-handed.

The waste management department told Gulf News that they have already bought one drone to trial, and that they plan to purchase two more drones by the end of the year that will “carry out inspections across deserts and beaches”.

*VIDEO FROM ABOVE: Dubai by Drone*

“We initially purchased the drone to monitor the landfill sites at Al Ghusais, Jebel Ali and Al Warsan, because as per regulations, they are allowed to reach up to 30 metres high,” Abdul Majeed Al Saifaie, director of the Waste Management Department, told Gulf News.

Dubai Municipality is particularly keen on these drone patrols because they are cost effective – at first they’re likely to monitor campsites and people having barbecues at beaches (as those are two of the times that litter is often left behind). The mini flying machines will also be used to monitor trucks that dump their waste illegally.

*MORE DRONE NEWS: The winners of Drones For Good*

“The main beneficial factor is the amount of time these drones can save. Instead of having municipality inspectors driving across the city, the drones will be able to fly directly to a number of different locations within a short time, and provide us with data and high-resolution photographs,” Al Saifaie added.

Are you a drone fan yourself? Remember, as of April 2015, flying drones in residential areas is banned.

Here are some guidelines from the Dubai Civil Aviation Authority: 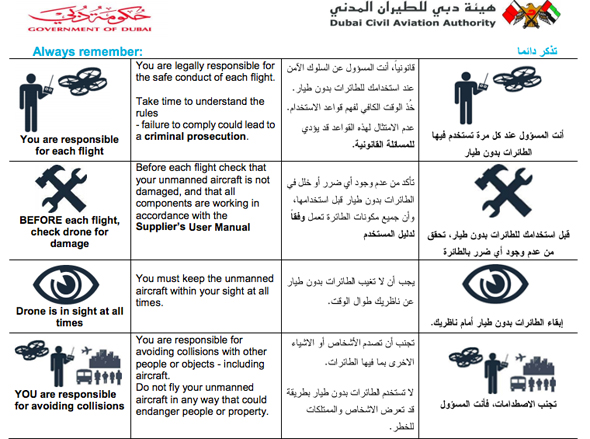 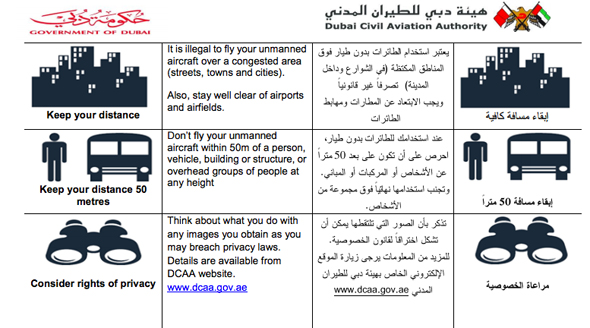