Dubai Airport tunnel will be closed on Friday

Gearing up for a weekend away? Well, Dubai Airport Tunnel is going to be closed from 12am to 6am on Friday morning for a mock emergency drill.

The drill will be starting at 2am, however the tunnel will be cordoned off from midnight in the direction of Qusais and Sharjah.

If you’re looking for an alternative route, motorists have been advised to use Sheikh Mohammed bin Zayed Road and Ittihad Road instead.

*More: Cost of parking will double at the end of the month*

Ittihad Road can be seen in red, Sheikh Mohammed bin Zayed Road in blue and the Dubai Airport Tunnel in pink: 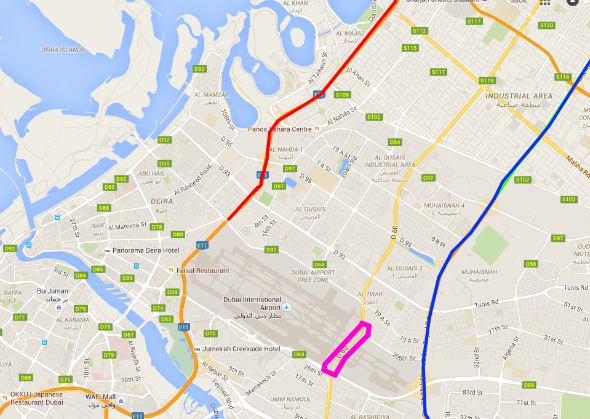 Organised by the Roads and Transport Authority’s (RTA) Crises Management Team, the drill will involve a total of eleven government and semi-government bodies.

*More: Downtown Dubai soon to be a paid parking zone*

He continued, “This drill forms part of a specific plan of RTA’s Crises Management Team, and complements the ongoing cooperation with other public and semi-public entities towards the implementation of uniform security and safety standards in sensitive infrastructures, facilities and districts as well as vital entities and service-providing entities in Dubai. The drill is also aimed to monitor the responsiveness and efficiency of stakeholders in discharging the tasks entrusted to them.”