The restaurants you'll find at IMG Worlds of Adventures

From Tony’s Skydeck to Downtown Shwarma (as seen in The Avengers), here’s where you’ll be able to eat at the new theme park opening in Dubai this August…

In just under three months, a 1.5 million square foot temperature-controlled indoor theme park the size of around 28 football fields is going to open near Global Village smack bang in the middle of Dubai.

And while yes, we’re excited about the rides at IMG Worlds of Adventures – you can read all about those and the different zones here – the food will be important to us considering we’ll likely spend the entire day there after stumping up Dhs300 for a ticket.

*ALSO: We take you behind the scenes at Motiongate Theme Park*

There will be 16 stand alone restaurants and 12 kiosks in the park, with 2,129 seats for people to eat at. All of the concepts are homegrown, and the food will be made on-site at the park.

IMG decided to invest heavily in the food part of the park after interviewing 2,500 people in the region about what aspect was most important for them. The first thing people care about? The rides (obviously). Tied for second equal? Food and queue times. This means what you can eat is more important than ticket price and customer service.

So, here are some of the spots you’ll find in the park…

Iron Man fans this one’s for you – this seafood and steak fine dining restaurant is the park’s flagship restaurant (there will even be a chef’s table). Think lobsters in tanks, steak tartare, New York cheesecake – and all in a space inspired by Tony Stark’s apartment.

The head chef is Daniel Anelka (who has worked at the Burj Al Arab, Atlantis and in Doha with Alain Ducasse). The team told us a meal in Tony’s Skydeck would come to about Dhs250 per person, and that the restaurant will be in ‘Stark Tower’ and will have glass windows that look out onto the theme park.

*VIDEO: Inside the new trampoline park in Dubai (it’s the region’s biggest)*

While it won’t be licensed, there will be a bar area serving mocktails and bar snacks. It will be open for dinner on weekdays and lunch and dinner on weekends.

Oh, and yes, there will be a full-sized Iron Man costume within the restaurant.

Are you the type of person who sits in Marvel films until the end of the credits to see the ‘nugget’? Well then you’ll recognise Downtown Shwarma (above) which is where Thor, The Hulk, Captain America et al sit down and have some cheap meat at the end of The Avengers movie… 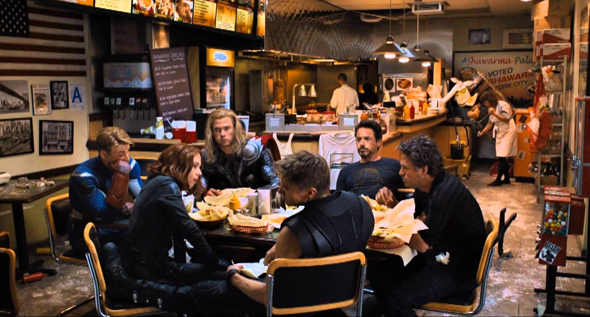 The IMG Downtown Shwarma will be modeled almost entirely on the one in the movie (just with cleaner floors). There will be four types of shwarma in the joint – including a traditional doner kebab, as well as a Lebanese-style pickles and garlic job.

This was one of the last concepts added to the park, and the IMG team told us that it’s inspired by the samosa and chai carts that have sat along Dubai’s Creek for decades.

The chef there is currently experimenting with different doughs, with frying, steaming and baking the samosas, and the flavours will range from vegetarian to chocolate. Yum.

This will be the main restaurant in the Cartoon Network zone (there’s a ride that actually flies through it). The team there will be dressed up as CN characters, so the younger visitors are sure to love it. 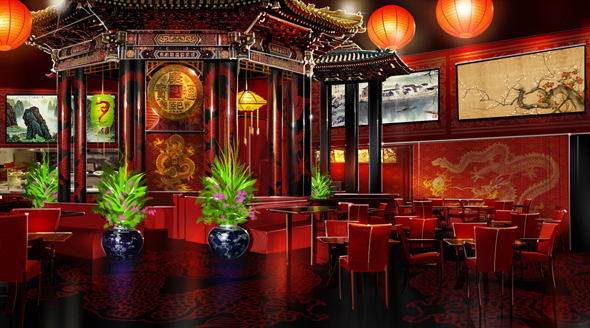 In the Marvel zone, this Pan-Asian restaurant is modeled on a downtown New York Chinese restaurant.

And this Marvel-zone Italian will be like a New York pizzeria. We’re told the pasta here will be fresh.

Some of the other offerings… 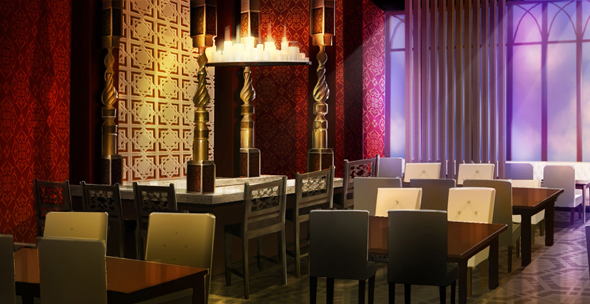 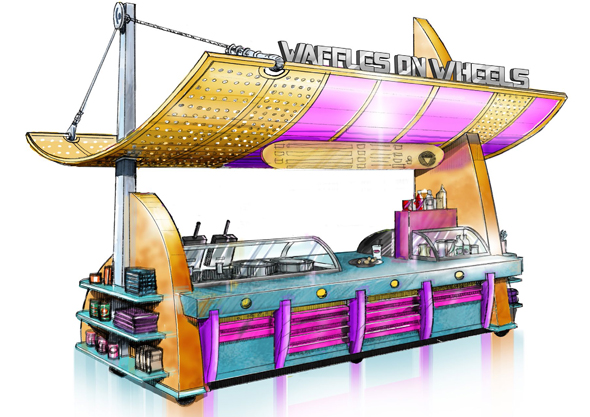 Mr Smoothy in the Cartoon Network Zone is based on the restaurant the characters visit in the cartoon Ben 10. Just like in the show, the menu’s focus will be on smoothies

The Coffeehouse in IMG Boulevard 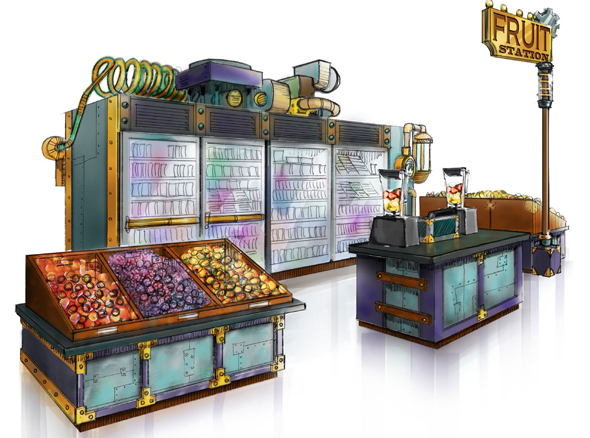 The Churro & Pretzel station, however … but still, who doesn’t love a churro? 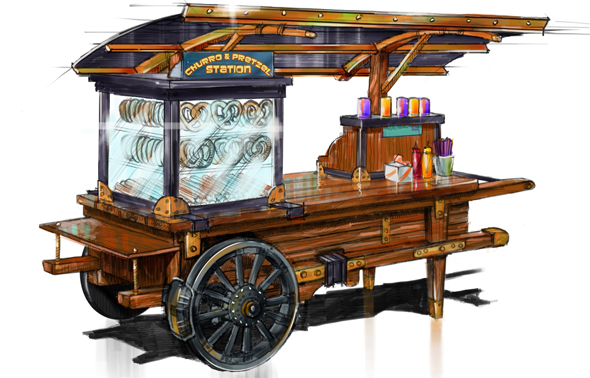 Spice Valley in The Lost Valley will be the park’s main Indian restaurant (we hear the chef there is currently in the process of sourcing the perfect rice).

– The full F&B team is made up of 515 people, and there will be 32 chefs in the commissary, which is the main kitchen where all of the bread will be baked, the chocolate will be made, the ice cream churned, the sauces prepared and more.

– Robert Stokes is the Head of Culinary at IMG (he was the Chef de Cuisine at the Burj Al Arab for six years, as well as the Executive Chef at the Al Badia Golf Club). He said making everything from scratch is important to him so that, for example: “we know what’s in the bread, but we also know what’s not in it. We can control the salt and sugar, and know that there are no E-numbers going into it.”

– “Part of our food promise is portion control,” Stokes explained, saying they won’t have hot dogs that are 45 cms long that “kids will never finish”. He noted that this will minimise excess waste too.

– Behind the scenes there’s a whole room that’s sole purpose is just to make the chocolate for the park. Amazing.

– The chefs are currently testing out all of the dishes on IMG staff at the headquarters near the park.

Eat & Drink
News
Restaurants
EDITOR’S PICKS
Ramadan in Dubai: 40 iftars to try
READ MORE
Where can Dubai residents travel? Check out these 14 destinations
READ MORE
Rumours, facts and reveals: New Abu Dhabi bars and restaurants
READ MORE
UAE announces reduced working hours for Ramadan 2021
READ MORE
MOST POPULAR
Sheraton Mall of the Emirates has a lot to offer this Ramadan
Looking for a cosy long stay residence in Dubai? Check this out...
Have you spotted the new Talabat Patrol team on Abu Dhabi roads?
Iftar home delivery for one? Here are some options...
Stunning Australian restaurant Hunter & Barrel is now open
YOU SHOULD CHECK OUT
Our website uses cookies and other similar technologies to improve our site and your online experience. By continuing to use our website you consent to cookies being used. Read our privacy policy here.