The humidity is bordering on unbearable, the dust is kicking in and the temperatures are climbing. We may just have reached ‘peak’ Dubai summer.

We told you August was going to be hot, and so far it has been – today the National Centre of Meteorology and Seismology (NCMS) is predicting highs of 48 degrees Celsius in internal areas of the country and humidity highs of 90 per cent in the eastern coastal areas of the UAE.

In Dubai the NCMS is forecasting that the temperature will hit 43 degrees Celsius and the humidity will climb up to 65 per cent today. The wind speed in Dubai is lower than in most parts of the country, and peaked at just 8 kilometres per hour yesterday.

So, for instance, with a wind speed of 8 kilometres per hour, a temperature high of 43 degrees and humidity of 65 per cent, the hottest ‘felt’ or ‘apparent’ temperature in Dubai today could be 52.6 degrees Celsius.

*ALSO READ: So when is the hottest time of year in the UAE?*

What’s apparent temperature? Well it’s a heat index invented in Australia by a researcher named Robert Steadman in 1984. It takes into consideration wind, temperature, humidity and radiation from the sun.

It works on the theory that when the body gets too hot, it sweats to cool itself off.  But, with high humidity the perspiration can’t evaporate, so the body can’t regulate its temperature. This is why ‘apparent’ or ‘felt’ temperature is different to the actual temperature. You can read more about how it works here.

The temperatures have risen this week according to the NCMS due to “hot and dry winds originating in the Empty Quarter”.

The NCMS is also predicting dust storms today due to wind highs of 38 kilometres and accumulated dust blowing in from other parts of the Middle East. Horizontal visibility will be as low as 400 metres in some areas of the UAE.

Plus, rain is being predicted for the east and southeast of the country. 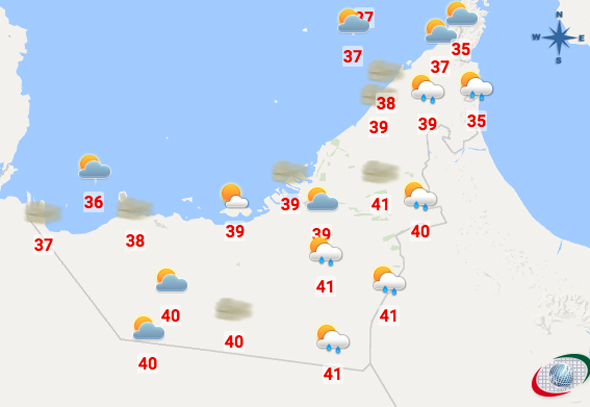 Does it rain much this time of year? Well the highest total amount of rainfall ever recorded in the month of August was 100.4 mm at Hamim in 2013.

Here’s a map that shows how internal Hammim is (it’s where the red pin is): 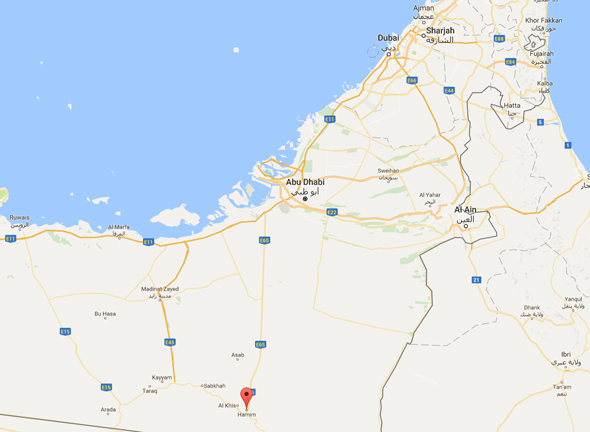 What about the weather for tomorrow and over the weekend? Well it’s looking like it will be very similar to today’s hot, hazy and humid climes.

Here’s what the NCMS is predicting for Thursday and the weekend:

“Hazy weather and hot to very hot over most areas, the amounts of clouds will increase at times over some eastern & southern areas with some towering clouds associated with rainfall. Moderate wind in general, freshening at times. The relative humidity will increase during night & early morning over western areas.”